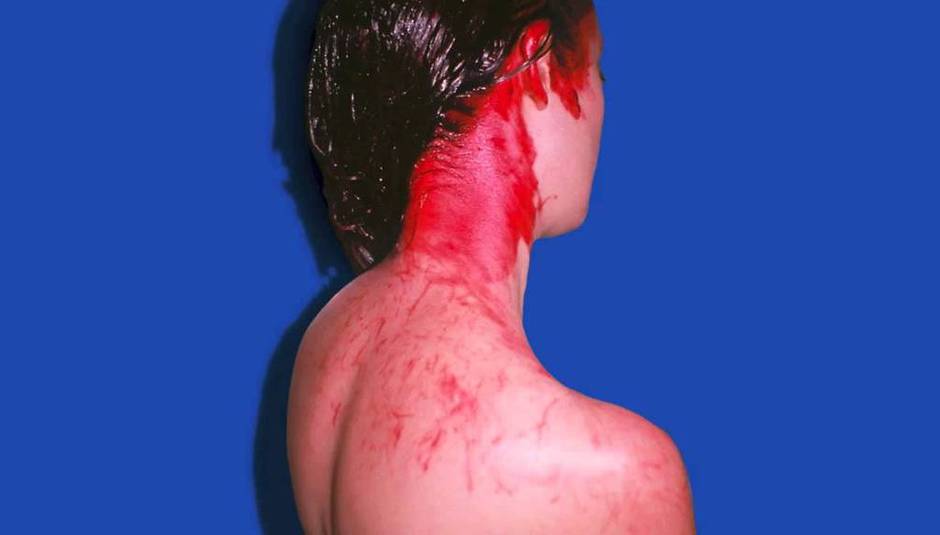 If Poliça's debut record Give You The Ghost was the band laying their cards out, leaving misty piles of scorched earth in their wake, then Shulamith is the sound of the rubble of that relationship turning into clouds of dust, flicking the bright lights on and making those remains flicker in the dense disco smoke. The rhythms are bigger, faster and the whole experience feels like the band have ratcheted up a notch, as their slinky slow-jams wrestle at a breathless pace... don't worry, they still occasionally give you time to gasp for more.

Here, Channy talks us through the album, track by track.

I wrote the chorus and melody for Chain My Name at the time of first hearing the track.

The demo has a lot of humming and mumbling but the main idea stayed. This is a song wondering about longevity. It’s asking are we made incompatible, is love just a battle? If it is just a conflict I don’t want to be chained down to it or married to it-I just want to improve it and be able to leave it when I want to.

One of the lines in this song was almost the title of the record, “boy make we way too tired”. I wrote this song on keys first and Ryan built the song for the melody and mood I had.

I remember writing this song on some hotel stationery from the 35th floor of the Hard Rock Hotel in Las Vegas. It was prophetic more than a realised story at the time I was writing it. The blast beats weren’t on there when I was writing the lyrics but they were an early dream for that song. The beat feels like the lyrics and the lyrics feel like the beat in this song to me.

Warrior Lord is my baby. It’s Poliça making music like we did before we were Poliça. Ryan played me that beat fo the first time at April Base after we’d finished laying down final vocals on a bunch of songs. He told me just to try something, I took two passes at it and he cut and chopped them on top of each other and that is what we put on the record. I wish I would only put first takes on my records.

I remember sitting the stereo as a kid listening to Eva Cassidy singing 'The Tall Trees in Georgia'. That was my song and it’s lyrics and melody held heavy on me. That song inspired “Very Cruel”. It’s written by the perspective of the adult me talking back to the young me, “look at you now, you forgot those lyrics.” That’s Chris Bierden on back-up vocals and for some reason along with the drummers and bass lines this song kills me live. I feel it extremely hard.

This song’s “real” name is Basketball. There’s another band in Minneapolis, Votel, and we both had songs called Basketball…I told myself whoever released their record first got to use Basketball. Torre is the name of a place I once lived where the story of this song takes place. I was playing a lot of basketball and spades at one point in my life.

This song is much happier live, it’s a different song. I like being able to bring different vantage points to a record than a live performance.

I also wrote this song a few weeks after finishing Give You the Ghost, so in many ways it feels as old as 'Lay Your Cards Out'.

We recorded this song at a particularly low point in my mental state and I sound like my tongue is dripping in molasses or I am possibly sleeping at the microphone. But it fits the song and all in all a record to me is a documentation of the band at this point in their lives and that’s the place I was in I guess. The band recorded their parts at April Base and the vocals are from Public Hi-Fi in Austin, Texas.

Tiff is one of the few Poliça songs that I’ve spent a lot of time with, crafting a story with specific things to say. It wasn’t one where I demoed a melody and basic foundation of lyrics at the first listen, I worked on it for a while.

I wanted it to be about somebody beside myself, but once again it became mostly about me. Justin Vernon was gracious enough to sit in on this song too.

Spilling Lines is my favourite song on the record. Ryan sent me about 5 beats that are now on Shulamith, from Brazil where he was visiting his girl at the time. We hadn’t written remotely like that before and I was excited to hear what he was up to... I think 'Spilling Lines' is from that batch. Pretty much on every song I’d say, “And I love what the drummers and Chris are doing here” but this is especially true on Spilling. It is incredibly fun to perform too.

Matty is short for Matrimony. I love the beat for this song and I love what the guys are doing on this song. We play it live with a longer break in the middle that goes off into a different melody and returns. This song makes me a little sad and it’s not about anyone anymore for the record but it captures the feeling for me of a failed relationship.

I wrote this song on keys first and posted it on my personal twitter almost two years ago now. It was real sad on keys. It’s my, “I don’t need anyone, no one can help me anyways” song. Everyone should have one!

This is our “slow jam”. I wrote so many different versions of this song since Ryan sent it to me from Brazil, but this is the one that felt the most sincere. The interplay between the bass and the vocals is slightly “Close Encounters of the Third Kind” to me. I also wanted it to be more of a duet between Chris and I, then me as the front person. It is something I hope for more of in the future.

Shulamith is set for release in the UK on October 21st via Memphis Industries, and comes out a day later in the US via Mom + Pop Records.