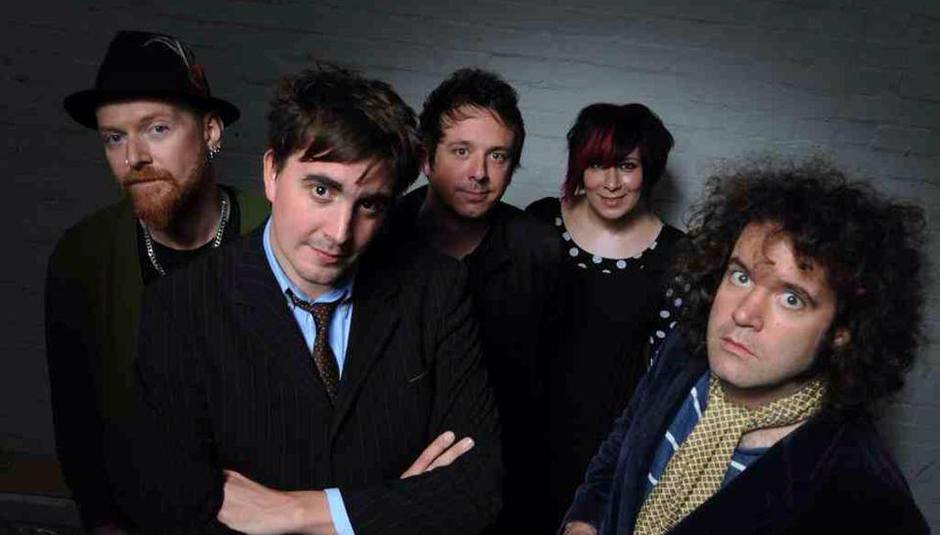 Having survived ten years in the music industry, Art Brut could be considered veterans of their craft, especially in the current climate. Initially viewed by some as a novelty act, they've gone on to record four albums and - as frontman Eddie Argos put it himself this evening - "made enough money to survive." Just about. Indeed, the fact they've enjoyed what can best be described as a fair-to-middling level of success throughout the past decade should send out a message of hope to every struggling band up and down the land. Oblivious to the concept of commercial success, whatever that entails, Art Brut have amassed a dedicated legion of fans which probably accounts for being the main reason why the band's existence has continued far beyond the majority of their contemporaries. For a band that celebrates irony, it's perhaps most ironic that Argos formed the band in order to appear on Top Of The Pops, something their fanbase still scream unapologetically at their shows to this day.

Having recently lost two long serving band members - guitarist Jasper Future and drummer Mikey Breyer - their nationwide September sojourn has been as much a bedding-in exercise for their replacements as anything else. Not that newcomers Toby MacFarlaine and Stephen Gilchrist seem out of place this evening. If anything, their presence adds a revitalising air to proceedings, a trait not exactly lacking from a band containing the inimitable larger-than-life character that is Eddie Argos at the helm. Having been based in Berlin for a number of years now while the rest of the band remain in London, one could argue they're not what traditionalists would call a functioning 'band' these days. Nevertheless, as anyone fortunate enough to be at their tenth birthday shindig at London's Scala in May would testify, they're still a formidable force in the flesh.

So, onto this evening. With tonight's show having been upgraded from the relatively intimate confines of the Bodega to the Rescue Rooms, expectations of a healthy turnout were high. While the attendance levels fell well short of the venue's capacity, it had little effect on what was quite possibly one of the most vibrant affairs the Rescue Rooms has ever seen. Tried and trusted support act Keith TOTP - complete with FIVE guitarists - doing an ample job of keeping those contented that arrived early, the reception reserved for Argos and co. some twenty-five minutes later has to be seen to be believed. Bounding on stage in typically hyperactive fashion, Argos launches into 'Bad Weekend' as though his life depended on it, its opening refrain "Haven't read the NME in so long..." quite apt considering the band's unfashionable status. Choosing an hour-long setlist from what is now an extensive back catalogue being a difficult if ponderous occupation, it's to their credit that tonight's fourteen song salvo is packed with fan favourites spanning their entire career (- if that's the right word to use given Art Brut's anti-careerist stance). Long time staples 'Bang Bang Rock & Roll' and '18,000 Lira' rub shoulders contentedly with the more recent likes of 'Lost Weekend' and 'We Make Pop Music'. As is common practice at Art Brut gigs, 'Modern Art' becomes a fifteen-minute rant about art galleries, Argos spending the majority of the song in the audience, at one point instructing everyone to sit down on the floor, which we do, every last one of us. Unsurprisingly, it's the closing quartet of 'My Little Brother', 'Emily Kane', 'Formed A Band' and 'Good Weekend' that augment the biggest response. Their status as spokespeople for social outsiders all but confirmed. Here's to the next ten years!

"We’re really great at moaning about ...