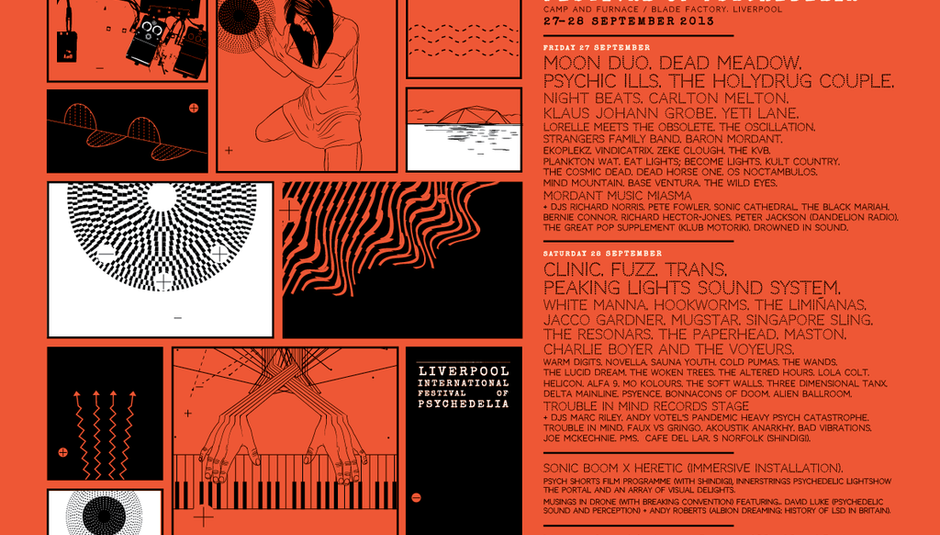 With festival season just about over for one summer, this coming weekend sees the return of the Liverpool International Festival of Psychedelia. Still only in its second year, the event takes place on Friday 27th and Saturday 28th September across three stages at the city's Camp & Furnace venue.

Billed as "the UK’s largest celebration of psychedelic sub-culture," the organisers have put together an impressive line-up of acts from all around the globe. Bands scheduled to play include DiS favourites Hookworms, Moon Duo, Clinic and Dead Meadow, while the DJ line-up has Pete Fowler, Sonic Cathedral, Andy Votel, Akoustik Anarkhy, Gringo Records and our very own Drowned In Sound among its number.

Weekend and day tickets are still available here, with proceedings expected to kick off at 5pm on Friday and 2pm on the Saturday.

We've put together a Spotify playlist of forty artists down to play at this year's event, while also selecting our twelve "must see" acts further down the page. See you there!

Here are Drowned In Sound's 12 "must see" acts at this year's Liverpool International Festival of Psychedelia.

Liverpool four-piece Clinic should need little introduction having operated outside of any specified genre or fad for the past decade-and-a-half. Since the release of debut single 'IPC Sub-editors Dictate Our Youth' back in 1997 they've gone on to release eight albums culminating in this year's Free Reign II.
(Saturday, Furnace stage, 1am-1:45)

Needing little introduction on these pages now having scored an incredible 10/10 with debut album Pearl Mystic, Hookworms presence on the Liverpool Psych Fest bill is sure to attract one of the weekend's largest audiences. Despite having to cancel their recent appearance at Festival No. 6 due to illness, we're hearing they're almost back to full fitness and rearing to go here.
Interview
(Saturday, Camp stage, 22:15-23:00)

New York experimentalists have also been around for a while now, releasing their first seven-inch as far back as 2003. This year's One Track Mind long player stands aloft as arguably the finest collection to date, and their set here promises to be one of Liverpool Psych Fest's highlights.
(Friday, Furnace stage, 22:45-23:30)

Fusing krautrock with post-punk influences and a 21st century twist, London's Eat Lights Become Lights have steadily built a reputation as one of the psych rock scene's most engaging live outfits. Their recorded output isn't to be scoffed at either. Recently released third album Modular Living scored an impressive 7/10 on Drowned In Sound, and their late night/early morning slot should act as a welcome precursor for Saturday's impending sunrise.
(Friday, Camp stage, 2:15am-3:00)

Despite only forming some eighteen months ago, Charlie Boyer & The Voyeurs have quickly become one of the most exciting new talents to emerge on the UK's underground circuit. Fuelled by a diverse range of influences ranging from Syd Barrett, T Rex, Spacemen 3 and Television, debut LP Clarietta, released on Heavenly Records earlier this year, remains one of this year's finest so far.
Interview
(Saturday, Camp stage, 19:45-20:30)

London-based duo The KVB are another outfit to release one of this year's finest records with the excellent Immaterial Visions. Coming from a similar, noise-infused angle to the likes of A Place To Bury Strangers, The Lost Rivers and Nine Inch Nails, they've just been confirmed to support The Brian Jonestown Massacre on their Australian tour at the end of this year. Prepare to have those eardrums obliterated here!
(Friday, Blade Factory stage, 23:15-23:45)

East London foursome Novella have been compared to The Horrors in some quarters and Lush in others. Whichever side of the fence you sit on, there's little doubt their gothic-edged shoegaze resonates impeccably when cast alongside their peers. Their Saturday afternoon slot here represents something of a rare excursion for the band outside of their home city. Be sure not to miss it.
(Saturday, Camp stage, 15:30-16:00)

Husband and wife duo Aaron Coyes and Indra Dunis, better known as Peaking Lights, have been creating ambient, drone-infused psychedelia for the past five years now. Here, they're bringing their dub-heavy soundsystem to wind down this year's Psych Fest during the early hours of Sunday morning.
(Saturday, Furnace stage, 1:45am-3:45)

Initially a side project for Wooden Shjips' Ripley Johnson, Moon Duo have developed an identity of their own, putting out a string of incredible records in the process. Recent sets at Latitude and Green Man proved their mettle as a live act too, and their midnight slot on Friday night should be among this year's unmissable performances here.
Interview
(Friday, Furnace stage, 00:00-00:45)

Icelandic five-piece Singapore Sling have been at the forefront of the new psychedelic explosion long before its current wave of popularity went stratospheric. Releasing five albums since 2002's debut The Curse Of Singapore Sling, their drone-infused noise rock sounds as if it were conceived at a late night convention in honour of The Velvet Underground, Spacemen 3 and The Brian Jonestown Massacre, which may or may not have been the case. Definitely not to be missed!
(Saturday, Camp stage, 21:00-21:45)

Parisian outfit Yeti Lane also contain a member called Charlie Boyer, though not to be confused with the aforementioned Voyeur. Having released their eponymous first long player on Sonic Cathedral back in 2009, they've been gradually honing their sound towards a more experimental, krautrock inspired palette as demonstrated on last year's follow-up The Echo Show.
Interview
(Friday, Furnace stage, 19:15-19:45)

Hailing from the unlikely rock and roll backwater of Carlisle, The Lucid Dream have been beavering away through the psychedelic underground since 2008, releasing a string of seven-inches and the excellent Erbistock Mill EP in the process. Debut long player Songs Of Lies And Deceit came out last month and is up there alongside 2013's finest. Be sure to check what all the fuss is about.
(Saturday, Camp stage, 17:30-18:00) For more information on the Liverpool International Festival of Psychedelia visit their official website and tumblr pages.

An Alternative 4AD: The Treasured Act...