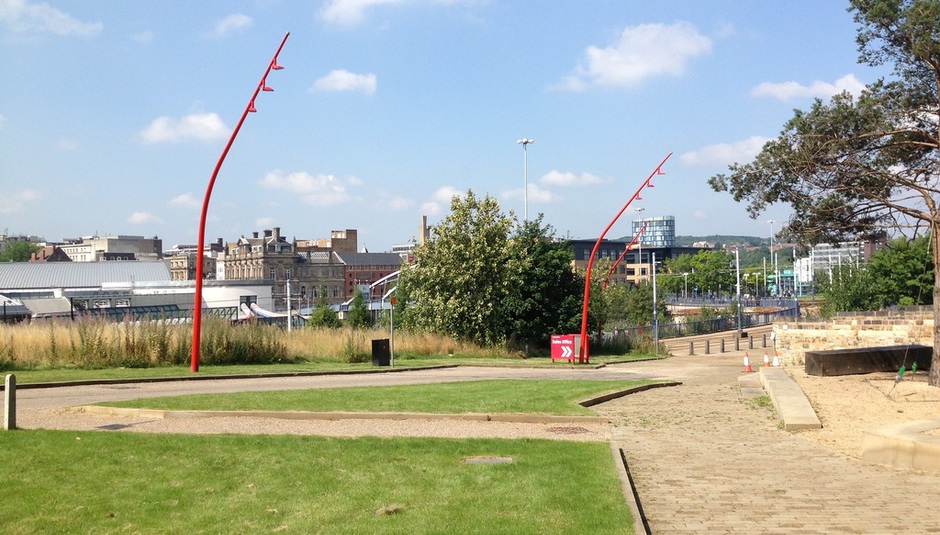 There’s a whole load of gigs happening in ol’ Sheffers over the next few weeks, and as ever you can find about a million listings down below. However, it’s worth taking this opportunity to draw some attention some great stuff happening outside of the usual live music sphere.

The literature festival Off The Shelf, for example, has several events that should be of interest to readers of this column, such as legendary music critic Paul Morley presenting his new book about The North, and a night hosted by St Etienne’s Bob Stanley that will feature Candida Doyle from Pulp. Meanwhile, the programme for annual audio-visual bonanza Sensoria is equally enticing, with appearances from Exit Calm and Laura J Martin, a drive-in screening of American Graffiti, a couple of cool-looking Bowie-related events and, for those lucky enough to get tickets, the increasingly famous Drenge at the remarkably small Lescar.

Sheffield’s art galleries aren’t disappointing either at the moment: former Cabaret Voltaire man Chris Watson has made A Sheffield Sound Map for Millennium Gallery and Laura Buckley’s stunning show at Site Gallery, The Magic Know-How, is a part-collaboration with Andy Spence of New Young Pony Club, of all people.

As for nightlife, things are looking up. The good folks at Semi Detached are hosting a one-off disco, Sheffield Sex City, at the Grapes on Septmber 28th – that’s a rare chance to dance to everyone from Artery to ABC, at what was once one of the city’s most cherished live venues. A couple of weeks after that, there’s an interesting new electro night called Computer Club launching at the University of Sheffield Students’ Union, for fans of all things authentically glitchy.

For us though, this is the big one: seminal indie night Offbeat is making a more than welcome return to the Raynor Lounge on October 11th. Expect to see the playlist projected on the back wall, pictures of woodland animals and crap dancing to the best leftfield indie, pop-punk, C86, indiepop and lo-fi.

Now, to remind you of the summer, here’s Joseph from Avida Dollars (accompanied by Jack from Best Friends on accordion) singing about Sheffield’s “meat scene”, which as far as we can tell is just a silly name for a load of great bands that hang out together. Or maybe we’re just getting old.

Ask anyone involved in the music scene in Sheffield who their favourite band in the city is, and there’s a pretty good chance they’ll say Blood Sport. Over the course of three EPs they’ve developed their distinctive aggro-beat (their word, not ours) sound into a debut album, Life In Units, that’s frequently weird, occasionally grotesque and constantly fascinating. Seriously, Alex Keegan, Nick Potter and Sam Parkin are geniuses – the idea of them sitting down and writing an album as ambitious and creative as this is inconceivable, and yet it happened. If there’s any justice in the world, in 20 years’ time there’ll be a Friday night dedicated to aggro-beat on BBC Four, or at least a late-night documentary on 6Music that explains how Blood Sport changed the face of music forever. Life In Units is out now and you can order a copy on Bandcamp. There’ll be a launch party at Penelopes on September 21st and, in the meantime, the insane video for ‘Clasp My Head (Percolator)’ is also worth a glance – if only 120 Minutes was still on telly.

Wet Nuns are amongst those who’ve declared their love for Blood Sport in the past, and they too have made a debut album. It’s self-titled, it’s out on October 9th, it’s been produced by Ross Orton and it’s… Well, it’s exactly what you would expect a Wet Nuns album to be – ludicrously loud, ridiculously riffy and impossible to work out whether to take it seriously or not. Whatever, their show at Beacons was pretty damn fun – as you can see in the new video for ‘Hanging’, below – and the duo play Queens Social Club on October 19th.

It would be silly of us to not to now mention High Hazels, who in recent weeks have not only had some promo pictures taken by Russell from The Crookes, but have actually won the ruddy Rebel Playlist on Steve Lamacq’s 6Music show with their debut single. Indeed, ‘Hearts Are Breaking’ has the same air of another era as anything The Crookes have put out, but with a Richard Hawley-ish melancholy draped over some seriously jangly guitars. There’ll be a single launch party at The Harley on October 4th, wouldn’t you believe.

Our interest was pricked by Mysteron last time we ran this column. Since then songwriter Jack Clayton’s found some bandmates, taken some pictures for his Facebook page and made an EP. Switched On Batch is an odd, brooding little analogue treat that sounds like it was made decades in the past and centuries in the future at the same time. It also mentions Barnsley. Mysteron have got some gigs coming up, starting with their debut show opening for The Yawns at the Audacious Art Experiment on September 18th.

Around this time last year we were wanging on about Puzzles when they released their single, ‘Escape Music’ - well now they’ve got an EP on the way. Little Orchard is out on October 28th via Bandcamp and the band will be celebrating the release of it with a gig at the Washington on October 26th. The lead track, ‘TMBTY’ has the intergalactic atmospherics we’ve always liked about this band, plus some pretty neat trumpets. Nice.

Also making a more than welcome return to Drowned In Sheffield are Pjaro, who release their new 7”, Goodnight Sweet Prince, on October 31st. You can hear a track from it over on Bandcamp now - it’s added a new twist to the band’s twitchy, slightly emo, slightly Slint-y formula, with some brilliantly desperate-sounding vocals before going all ‘Territorial Pissings’.

The two guys in Pjaro also happen to play in Collider, who’ve been selling a split with Soreface called More Average Than Everyone Else at their shows. The track Collider have contributed, ‘Mopping Up’, in fact makes this (we think) the first official Collider release, which we’ve been awaiting for quite some time. It doesn’t disappoint, sounding sloppy and carefree in all the right places and ferociously tight where it counts. Hopefully in another couple of years they’ll release something else.

Rounding off the releases for this edition of Drowned In Sheffield are Best Friends, whose new 7”, ‘Happy Anniversary’/‘Nosebleeds’, is out through Art Is Hard on September 23rd. By now we shouldn’t need to tell you how great this band are – they’ve made surf-rock the most exciting sound in one of the UK’s most land-locked city’s, and the new single comes in the form of a comic book designed by Lew Currie from one of our other faves, Nai Harvest. There’s a launch party at the Great Gatsby on September 28th, which will be GREAT.

Go to some gigs!

As promised, loads of gigs!

October 14th – Lanterns On The Lake – The Harley

We’d never heard of The Half Earth until a rival website decided to interview him the other day. But anyway, we’re caught up now and it turns out this is the music of one Conor Stephenson, who’s from Blackpool but has been studying towards a degree chemistry at one of our city’s fine universities for the last three years. His latest track, ‘Fox’, has Bon Iver-style vocals atop some very graceful acoustic guitar chords, and very nice it is too.

We’re a little bit more clued up on Spook Muziek, which is the new project of Adam Follett, formerly of Drowned in Sheffield regulars Cats:for:peru. This is a departure from Follett’s previous alt-pop compositions, and sees him go down a much denser, dancier route. There’s a few tracks of techno for you to sample on Bandcamp, the most recent of which, ‘Dinner Is Served’, you’ll also find below.

A no-nonsense indiepop duo called Elopes came to our attention back in May when their first demos appeared on Bandcamp. We’ve been trying to squeeze them into this column ever since, because they’re great, but never quite managed it until now. As it happens, this is pretty good timing, because Hazel and Cara have got some gigs coming up after a summer off the circuit, and are planning a tape release of said demos. This is indiepop at its best – warm, to-the-point, and just a little bit political. Lovely.

We’re also rather keen on the demos Amorous Dialogues have got on their Bandcamp. Apparently recorded before a gig at Meersbrook skatepark, the Love-talk Demo has four tracks, the longest of which is precisely 100 seconds. And even that seems to actually be two songs, sounding like a cross between Slayer and Black Flag. Catch them at Heeley Sport and Social Club, if you’re able to cope with such a concept.

Finally, a lovely piece of house music borne out of the University of Sheffield’s alternative music society, Small Ideas, which, if you’re a fresher, is well worth signing up for if you want to help put on awesome gigs and discover all sorts of amazing music. Peaks will open for Puzzles at The Washington on October 26th, and this is ‘Jaya’:

Show me your bits and bobs. Musical ones, that is. Email me at robertccooke@gmail.com or find me on Tumblr and Twitter.