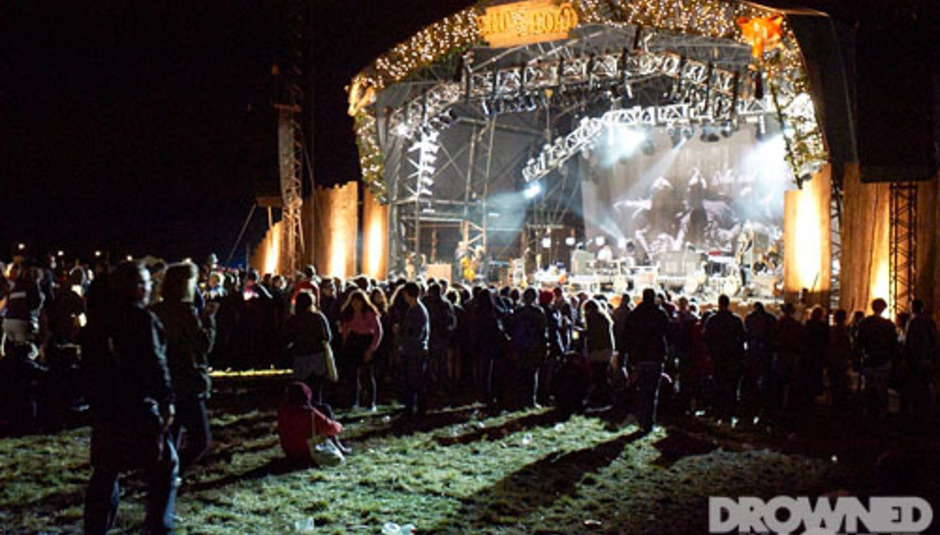 'This is such a great festival.' I hear that a lot over this weekend, and not just from drunk people, stumbling through the woodland glades beneath the fairy lights at 3am. Heck, I’ve heard it a lot whilst at other festivals, at Latitude and Glastonbury and Green Man and The Great Escape, and from two guys in a queue in front of me in a shop a few weeks back: all of them eulogising over a pretty tiny gathering in North Dorset.

But it’s true that End Of The Road really, really punches above its weight. With a capacity somewhere between ten and fourteen thousand people - no-one on site seems to know for sure - it’s one of the smallest ‘main’ festivals of the summer, but you wouldn’t tell it from the lineup: with David Byrne & St. Vincent, Sigur Ros and Belle & Sebastian headlining, the Sauron eye of the press has been all over this for weeks.

Turns out it’s pretty aptly-named as well: it may no longer be the last festival of the summer but getting to it feels damn-near purgatorial, with the 3G signal dying 20 miles off and the hedgerows narrowing like Labyrinth. With the light fading and the complete absence of any signs, it’s amazing we found it - more so that we succeeded in pitching something approaching a tent with the ground beneath the campsite being essentially rock. Everywhere lay the twisted forms of discarded pegs bent into surrealist shapes, a Dali landscape of metal and grass and collapsing canvas.

It is beautiful though. Sure, Latitude’s got its lake and Glastonbury’s got the stone circle and Reading’s got its fires and urine, but the Larmer Tree Gardens lend the best setting for a weekend of music that I’ve encountered, all leafy groves and lilied ponds and Tudor cottages, winding paths and massive skies: essentially it’s a pre-war novel. Three times I was passed by couples on a tandem bike churning their own ice-cream and I didn’t even hate them.

Granted, there were a lot of distractions. The bar was set high on Friday afternoon by Woodpecker Wooliams, a horribly-named but utterly compelling display of experiment and erratic rhythms driven by singer Gemma Williams’ eccentric and frequently terrifying moodswings: certainly she’s the first musician I’ve seen who made a harp seem dangerous. London’s Duologue were decent if a touch too understated, their flurry of loops and synths and reverbed guitars evoking Delphic before that shocking second album, whilst Braids lost most of their set to a traffic delay: a shame, as their woozy, mesmeric electronica needs more time than they got to really impact.

I don’t really know Eels. Apparently this is pretty much blasphemy according to the shouty man in the Rough Trade tent, but hey, coming at them blind they sounded pretty damn good, their riffs huge and frontman Mark E Everett a winning stage presence. “Woah, that was a lot of fun singing about cancer and all,” he quipped after 'Cancer For The Cure', although the band did struggle to compete against the massive double-rainbow that formed during their set.

I do know Efterklang though. A fan of the band since 2004‘s Tripper it’s been heartbreaking seeing them waste away over the last three years, shedding most of their members and paring back their sound at the cost of their ambition. Sure, the orchestra shows have papered over many of the weaknesses of the post-Magic Chairs material, but the orchestra isn’t here for this performance, and these songs sound naked, more like demos than the cinematic expanses that the band have done so well before. Casper and Rasmus are as endearing as ever, of course, but that doesn’t lessen the tragedy: that just as Efterklang finally start getting exposed to larger audiences - they’re headlining a stage here - they’re the least interesting that they’ve ever been.

That’s not an issue for Savages though: from the moment they’re onstage it’s impossible to look away. Clad in black and white and wreathed in smoke the four-piece are a lesson in coiled stage presence, studiedly brooding and unremittingly intense. On record they’re a little airless, their songs playing second to their style, but here they’re alive, singer Jehnny Beth anticipating every frenzied beat and snarl of guitar with her head and her fists against a bed of ceaseless feedback. It might be one-note but what a note it is - more exorcism than show, their steely monochrome is more thrilling than anything else this weekend. That’s quite the feat considering Saturday’s evening lineup, a solid flow from Warpaint to Daughter to Sigur Rós to Poliça - quite possibly the strongest five hours of music programming I’ve ever seen. Sound issues hamper the opening of Warpaint’s set, though, 'Bees' coming off underwhelming and a little messy, and their songs struggle to take hold in the light. The biggest cheers go to the familiar, to 'Undertow' and a combative, vicious 'Elephants', but it’s the new material that’s far more exciting, often ditching the guitars and driving with beats.

Having seen Daughter absolutely kill at Latitude it’s a surprise to see the response far more muted here. They do nothing wrong at all, but Elena Tonra’s excoriating tales of heartbreak clearly don’t have the same impact on an audience significantly populated by young families as they have done elsewhere: it’s not until 'Still' that many really start paying attention, glass of wine in hand and the other on the baby stroller. It’s a similar struggle for Sigur Rós, their protracted, stately grandiosity proving problematic for those at the edges who just wanted to dance or yell or down cider loudly. But for everyone else it’s a stunning set, familiar but no less beautiful for it, 'Yfirborð' and 'Brennistein' and 'Kveikur' adding a darker hue and welcome grit to the band’s polished and flawless performance. For all the mockery often aimed their way - and there was a lot from the comedy stage this weekend - it’s quite incredible just how powerful many of these songs still are: the crowd noise stops dead through 'Vaka', as it always, always does, and I genuinely don’t think there’s any more thrilling piece of live music than 'Popplagið' when it breaks. Whilst the jokes about Sigur Rós continued within comedians’ Sunday sets, far fewer people were laughing at them.

That said, people still wanted to dance. Enter Poliça, their kinetic live sound a considerable step up from the subdued, 3am character of their recorded output, and propelled by their two drummers and the striking presence of frontwoman Channy Leaneagh, her voice tender and slightly ethereal. Japan’s Ichi is more striking still, his music a mesh of childlike whimsy and sonic invention, his instruments ranging from ping-pong balls to party poppers, steel pans to water and his themes not really getting much further than animals. And he’s fun, really good fun, and a strangely emotional experience as well - although that’s more likely the sleep deprivation, with Sunday’s lineup the main casualty: Public Service Broadcasting’s set seems like fever dream, the patchwork of old samples and flickering TV images both rousing and disconcerting as we dance to the dead.

In a lot of ways though the whole weekend felt like fever dream, from stumbling down a hill to a comedy area in a forest through to the badger’s head leering off the main stage and the boat in a clearing. Sure, every festival has its quirky elements now but End Of The Road’s got everything just right: it’s intimate yet invigorating, eclectic yet cannily curated, and whilst it may not now close the season it may as well have done. Heck, I’ve talked to a lot of people about End Of the Road since getting back and to each one I’ve said the same, the same words - pretty much a mantra - that I heard over and over and now I can’t stop saying. It’s quite possible that I’ve somehow joined a cult but if so I don’t care: this is such a great festival.