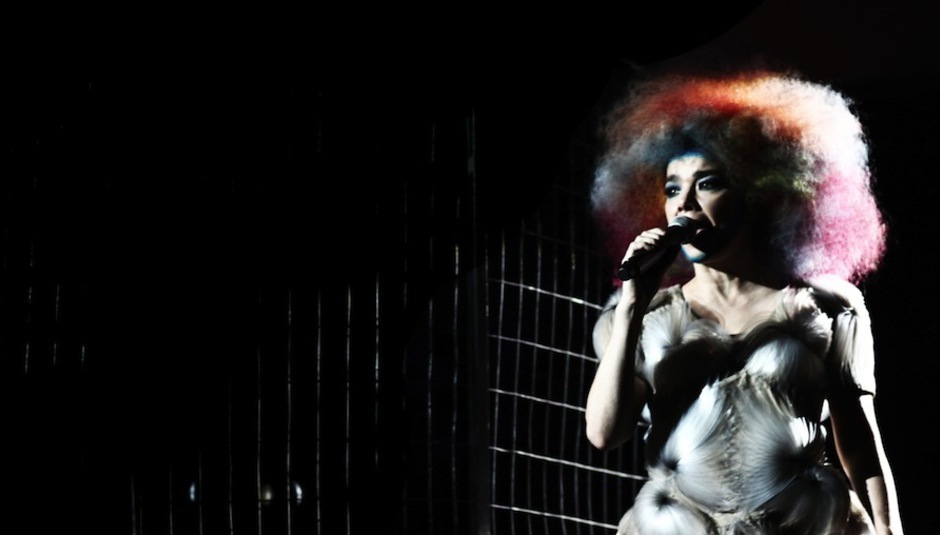 Even though Volta was received as being slightly off the boil, it would take steely cynicism to suggest that Biophllia was an example of Björk using gimmickry to rekindle herself out of a creative slump. Sure, it may suffer from a lot of damnation with faint praise: words like ‘interesting’ and ‘admirable’ usually taking precedence over words like ‘sensational’ or ‘beautiful’ but, tonight, Biophilia comes alive as a thrilling showcase of sound. Björk's vocal – along with heart-stopping bass and an all-female choir – meld together into a sensual blend of texture, even as the hollow usage of lightning and gravity continue to prop up slightly below-average songwriting.

With Björk in the centre of the hall, surrounded 360° by the audience, Alexandra Palace has never sounded so good (apparently it was the first time this has ever been done at Ally Pally, it may prove to be the first of many!). Playing into the acoustics of the place (which can often sound muddled, muffled and faint, with more conventional staging), the recent dubstep influences rattle through the ribcage while the vocal soars above the squalor, making a close to perfect mix.

Early set highlight, ‘Crystaline’ absolutely roars – its low-end thrusting through the room, the choir twisting to each side of the audience with each call and response, before descending into a cacophony of live drums and electronic din. Björk has been many things in her career, but rarely as straight up noisy as tonight. It’s a sound which suits her handsomely.

Sadly, there are moments when Björk's perfectionism gets in the way of a high-profile and costly experience for the audience. Despite taking great pains to open the show with a formal request to not take photographs, owing to the care and attention put into creating a show to be experienced in the present moment, little regard is given to the jarring experience of immediately repeating three or four songs. At one point Björk ends up abandoning the stage owing to imperceptible ‘technical difficulties’. We later discover that all of this is for the sake of capturing the show for a would-be flawless DVD release.

But when the repetitions are something as flooring as the a capella ‘Sonnets/Unrealities XI’, with its swooping drama and bona fide poetry, it ultimately feels no great hardship to indulge Björk in her desire to render things “just right”, as she modestly puts it. And it’s an absolutely staggering show. It isn’t as high concept, nor as much of a flat out spectacle, as it seems to think it is with its pendulums and its kooky staging, but with a vocal and textual support like Björk's, it’s of no consequence. Swinging from tender explosions to empowering euphoria without losing any sense of coherence, Björk proves tonight that even her weakest pieces of song writing are more than enough to create truly transcendental music.

Planet Gear: Polly Scattergood on the...