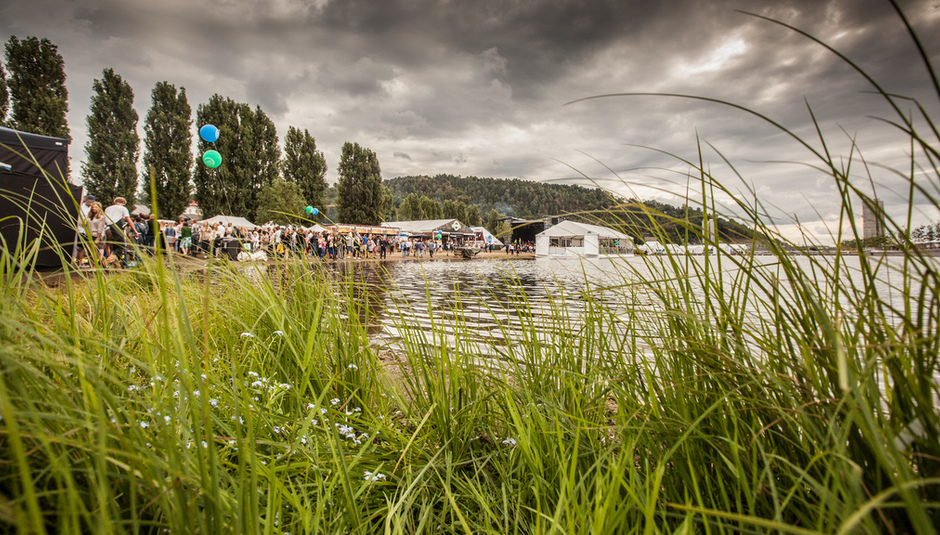 One of the most comforting feelings in life is that of familiarity, and so it has been with the Øya festival for the past decade or so, occupying a long weekend in early August where the best and most prominent bands in Norway play alongside the great and the good from across the rest of the world, all in a pleasant, waterside medieval park not far from the centre of Oslo. Perfect. Some things change – the weather, the line-up, the location of the VIP area – but much stays the same.

Bigger change is on its way, though, with 2013 last year that Øya is being held in the Middelalderpark for the foreseeable future. It is moving to the mostly residential area of Tøyen, more specifically Tøyenparken. Tøyen’s current biggest draw is the Munch Museum, which has been there since 1963 but will move to Bjørvika in downtown Oslo in the near-ish future.

Before all of that happens, though, it’s time to enjoy one (perhaps temporary) final hurrah at the festival’s home since 2001. The line-up is particularly strong year on year, and the similarly strong Norwegian krone obviously helps when booking the acts like the Wu Tang Clan, Blur, The Knife and Kraftwerk, though the reputation of the festival and Oslo goes some way, I’m sure. This year is no different. It’s often difficult for bands to truly stand out during festival shows, but when it does click – whether down to the sunset, alcohol intake, weather, one’s proximity to the stage or whatever – it can be genuinely special. There were plenty of 'good' and 'great' moments, Haim being straightforward, charming and affable, The Wu Tang Clan show in general and of course Grimes and her two dancers. Below are my four most 'special' (for a variety of reasons) shows of Øya 2013.

The music Norway does best is that which could broadly be labelled 'avant-garde', or the weird and occasionally esoteric stuff. Arty, you could say. There’s a lot of it here at Øya. In business speak I think this is where people would say Norway 'adds value'. It’d be easy enough to reel off a list of these, whether playing the festival or not but there can’t be many artists out there who can match Jenny Hval pound-for-pound, and she is certainly a musician who is worthy of the oft-misplaced term 'artist'. 2011’s Viscera was such an incredible, multi-faceted and hugely conceptual album that it was difficult to imagine it ever being matched. Innocence Is Kinky, released earlier this year, may have bettered it, though. Hval plays on the opening afternoon of the festival in the 'Klubben' tent and, although the weather isn’t unseasonably warm as such, the temperature inside the marquee is high enough and damp with humidity and sweat. All the more remarkable, then, that the performance is literally goose bump inducing, a possibility made more likely by the introduction of strings and additional vocalists, to give things that extra chill. One of the things which stands out when the newer songs are given a run through is the power of her voice. Hval has always been an artist who experiments with the various tones, timbres and accents of the voice as well as with the delivery of those words, but her vocal prowess becomes blindingly apparent when you’re in the same room, as does the subject matter of her lyrics.

Another Norwegian act who fall firmly in the 'artist' category are Shining. I don’t know if a more balls out act exist in the world today but this metal/jazz/noise troupe are one of the more extreme bands it’s possible to see, here or anywhere. The combination of blasting horns, searing guitars, screaming and growling is an unholy alliance one but at all times the musicianship is of the highest standard. It’s easy to get lost in that, before snapping out of it and being blown away after re-opening your ears.

Their main main Jørgen Munkeby has always terrified me slightly, right from the first time I saw the band play. I suppose it’s difficult to come off as an affable and approachable man when you’re blowing some serious sax notes over the top of a pummelling backing. This time I am standing far enough back to not have to look directly into his eyes, though there’s no need for it, the music is petrifyingly intense enough as it is. As far as fitting finales go, Shining’s now legendary cover of ‘21st Century Schizoid Man’ is pretty beefy, but it’s the screeching saxophone which really does it for me. Shining’s uncompromising approach to live performance is exactly the sort of thing that should be available to see at a festival. Enter at your own peril, though. Kraftwerk are a band who make particular sense as a headline act. OK, they’d make sense as a headliner for a huge number of festivals across the world, but there is an aptness to them playing here, given the vast array of Norwegian and Nordic electronica which has been created in the past decade or so, rising more prominently with the likes of Todd Terje, Lindstrøm and Prins Thomas. Would it have been possible without this band? Probably not. Kraftwerk, naturally, do not do anything spectacular but put on something more accomplished.

The appeal in seeing this pioneering band lies not in seeing the “show” but more in them going through their back catalogue in person. OK, so there is a huge 3D projection screen in action, but this feels like more of a concessionary nod to the fact that they’re playing live rather than an enhancing factor. It’s also distracting – if there is one thing I am certain of it's that you really do not need to see a 3D satellite hurtling towards your head during 'Spacelab'. After chucking the 3D glasses everything clicked into place and the sound was rich, dense and as nearly as fresh as the day it was composed. I also became slightly emotional during ‘Tour De France’ which unfortunately meant the glasses returned.

Returning to and finishing with the avant-garde, there can surely not be another performance at Øya this year which fits the description so well as what we see and hear from The Knife. It almost defies description. The Swedes been performing this show for a few months now and reports have seemed to indicate a great deal of bemusement from some critics and, as such, the stage show itself did not surprise as much as it could have, though I'm sure some were baffled by the hype man beforehand. All of that may have been too much to take, beguiling enough as it is. There were so many dancers dancing. In jumpsuits and with face paint. They were joined by drummers drumming, too. Sticking tongues out. Shouting things. All of the questions which arose were the by now well-trodden ones… 'Are The Knife actually there?' 'If they are there, then who on earth is who?', 'Where should I be looking?' 'Are we being had here?' and 'How is a man in my position meant to answer truthfully when impersonally asked if he wants to smash the patriarchy?'. Hopefully the answer was to crack a broad smile, because that’s what I did. What else could you have done at this point? Many have made the joke about Pan’s People, but this particular time I decline, partly due to being surrounded by foreigners. Much like the watershed of discarding my 3D glasses, it seemed like we all (or at least those in close proximity) learned to loosen our furrowed brows and enjoyed the show for what it is, The Knife for what they are at this moment in time - a show, and a bloody great one at that. A spectacular end to the festival.

Wherever the Øya festival decides to go, I can't see it being anything but a success, and success which has been hard won but well earned. Well over a decade into its existence it has established itself as one of Europe's leading festivals, not to mention one of its greenest and cleanest. 2013 was my third year at the festival and each year has impressed me in a different way. Here's to next year in Tøyen.