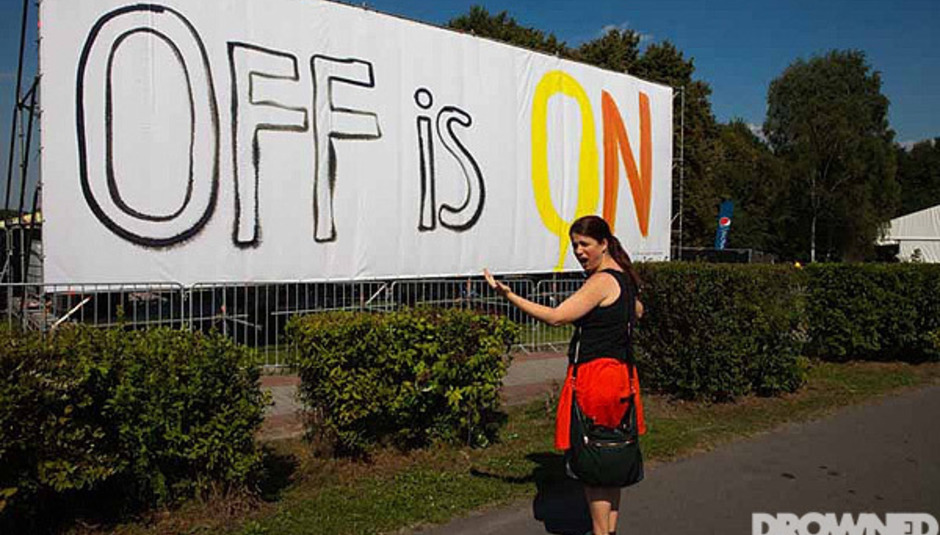 Four years ago I was, for whatever reason, approached the organisers of the fledgling OFF Festival – which takes place in the Polish city of Katowice – to come over and review. It was young, I was young, we had a lot of fun.

DiS was invited back, but 2013 was the first time I’ve been able to make the journey myself… four years is a long time in festivals, and OFF has grown in size and scope, moving away from its former site of some sort of, um, fire-brigade park (?) to the much bigger Dolina Trzech Stawów . Glancing over the 2013 line-up, headed by Smashing Pumpkins, Godspeed You! Black Emperor and My Bloody Valentine, and I don’t think it’d be fanciful to describe it as a sort of Primavera of the East, the lesser number of acts easily compensated for by the mind-boggling €30 ticket price.

In actual fact, OFF really does punch impressively above its weight – it really is waaaaaay smaller than Primavera, and probably quite happy that way.

Even with its growing international reputation, OFF remains Polish to its core: the audience is overwhelmingly local, with only a very light smattering of folks from elsewhere, and Polish bands make up a large chunk of the bill. As with 2009, there was one veteran Polish purveyor of sentimental song – in this case * Zbigniew Wodecki with Mitch & Mitch* – waaay up the bill, who the Poles went nuts for, and everyone else was confused by. It was neato: the only real downer is the Polish quirk of only being able to drink in certain restricted areas (a particular buzzkill for the late night dance line up, which carries on until 4.30am).

Quibbles, though: OFF is friendly, well-organised, very manageable in size, and has a line-up to die for – none of the names are massive, but even so, the logistics of paying for them all off a €30 a pop ticket price for a modestly-sized festival are pretty mind-boggling. A lot of Western acts are vocal about it being their first time in Poland and one assumes some of them may take at least a small pay cut.

Aaanyway, the weirdest thing about writing a festival review is the bit where you rattle on about bands playing every festival going that summer, but here goes: the headliners… about the only thing the headliners have in common is that none of them address the crowd at any point. Well, Billy Corgan muttered something or other, but he didn’t really have the air of a man who wanted to be there. But does he ever?

The Smashing Pumpkins used to be erratic and awkward. Not so much now - given just 80 minutes to play, Corgan takes the band’s current setlist and chops out half an hour or so of new material to leave us with something hit-heavy and approachable. It’s genuinely pretty good – about two thirds of the songs are amazing, and the new stuff’s perfectly nice. There’s no sense of hostility from the stage, just possibly a slight air of a man broken. God knows who the rest of the band are, but they do the job, I guess.

Speaking of only having 80 minutes to headline: Godspeed You! Black Emperor manage to play exactly three songs, four if you count ‘Hope Drone’. I didn’t exactly time it, but I think over half of their set consists of the final song, the unreleased ‘Behemoth’. This freaks people out less than I expect. Anyway, I’m not really sure what there is to say – Godspeed are an astonishing live band, and the pairing of ‘Mladic’ and ‘Moya’ is utterly magnificent, fiery crescendo after fiery crescendo. It’s still pretty mental to see them headlining an outdoor festival – more a glorious incongruity than a crowd conquering triumph, but hey ho. (By the by, we pump into them at the hotel just as they were taking a daytrip to Auchwitz, which seems a very Godspeed thing to do).

The final night headliners are My Bloody Valentine, who I don’t think have been around these parts since their reformation, and the air of anticipation is pretty sweet. And as ever, they don’t disappoint – part of me still wishes they could do something about the vocals (which sound less hushed, more like there’s a technical problem) and part of me wishes they took a less lackadaisical approach towards plugging the new record (though they’re playing three songs off it, with ‘Only Tomorrow’ and ‘Wonder 2’ sounding goooood), but when you’re immersed in these fuzzy canyons of womforting noise it’s hard to pick holdes. ‘You Made Me Realise’ is fucking deafening too – there’s some weird health and safety stuff at this festival, but a maximum late night decibel restriction does not appear to be among it.

Other highs: Deerhunter are astonishing, making their Polish debut with a ferocious, generous set that zips freely between their four ‘main’ albums – this was is a one off European date and they seem to be in high spirits, with Bradford cheerily trying to whip up some anti-Russian sentiment and the set ending in a staggeringly noisy and chaotic version of ‘Monomania’ that probably figures as the high point of my weekend. Fucked Up I saw here in 2009 and was utterly delighted by how utterly delighted they were to be here – that goes double this time, with Damian spending the entire show in the enormous crowd (radio mic, innit) while the band do their melodic Canadian thing. Julia Holter sounds lovely with a brass and woodwind-based band that does a fine job of fleshing out her mesmeric new album Loud City Song. Nite Jewel and Peanut Butter Wolf play a set fifty per cent taken up by a pair of languorously beautiful Kraftwerk covers (‘Radioactivity’ and ‘Computer World’). Austra turn in an exceptionally spirited after hours set that threatens to reconfigure their angsty electronics as viable party music.

And so on and so forth – much as all the international bands will play the UK, it’s hard to think of any of our festivals – certainly once ATP has breathed its last – would have the good sense to bung them all on one line up. OFF is a festival for the Polish first and foremost, and I hope it stays that way – but it’s nothing if not welcoming. OFF isn’t the Primavera of the East – it’s just OFF.