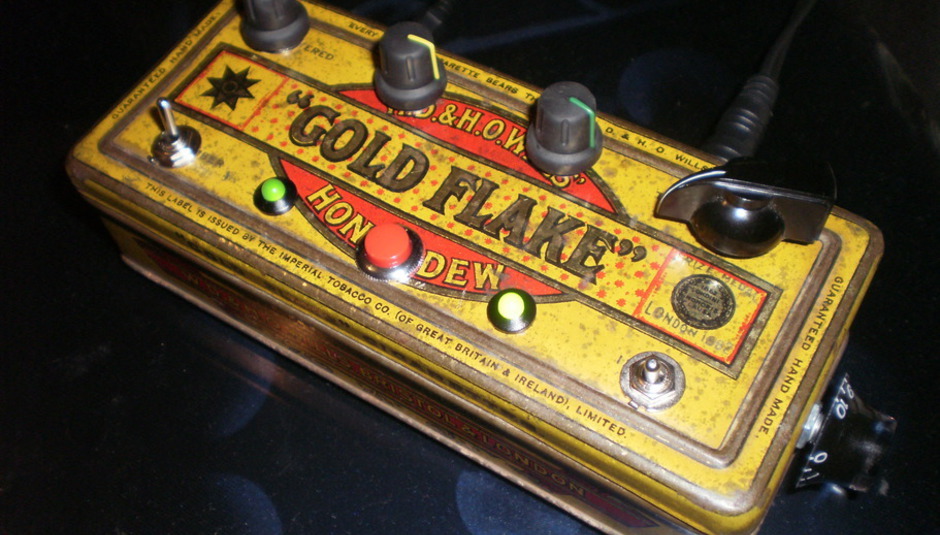 Welcome to a new DiS irregular feature, in which we ask bloggers who are in the know about new music, to share their favourite new acts they've fallen in love with recently. We kick off with one our editor's favourite blogs...

GoldFlakePaint has a terrific track record and a rather particular sound that it loves. A lot of the music that this Bristol-based blog champions glistens and ebbs with a neon twilight. Other bits they love has a grainy, filmic quality to its dirge. Unlike a lot of blogs that only cover bands so new you can smell the after-birth stench all over them, GFP is more of a 'webzine' and interviews major acts like Efterklang and No Age.

This week, GFB released a pay-what-you-want compilation, to champion the music they love and raise money for charity. Here, however, we have asked them (well, Tom Johnson is his name, but there are seemingly a few others involved in the blog) to reduce down all of the music they've posted about this year into a digest mixtape-like post of the very best bits, some of which you can expect to see trickling onto tips for 2014 lists in the near future...

Hands-down, the best new band of the year; Gaps are a Brighton-duo who mix folk sensibilities with weird and slow-tempo electronica. Each track so far has had the same magical glow. It's spooky, alluring and it won't ever let you go. I need to stop fawning over them quite so much as I think it's beginning to get weird.

Dublin duo who make beautiful electronica; one-part Boards Of Canada, one-part Fuck Buttons. Their new EP is stunning, especially 'Billions' which does more in three-minutes than most bands achieve across a whole record.

Only one track has emerged from this Manchester-based producer but it's one of the biggest tracks of the Summer - in it's own quiet way. The smooth falsetto delivery coupled with the aching sense of despair is show-stopping.

No one else is making music like Hockeysmith. Two sisters who produce creepy folk-ish music that manages to sound wall-shakingly loud and then as quiet as someone whispering in your ear; often at the same time. An EP/album could be very special indeed.

The best American guitar record of the year. Seriously. It's like every cult band from the past decade bottled in to half an hour of music. It's raucous, epic, weird, slow-burning, beautiful, touching, ridiculous, overblown and completely wonderful. The kind of record that makes me annoyed that more people don't read my site. I want the whole world to know how good this is.

Lead track Platoon was great, but it's flip-side, Drops, is mesmeric. It swoons, creeps and tip-toes across three-minutes of aching soul; blending hushed sweeps of brass with syrupy vocals and a muted but vibrant backdrop that even manages to make a creaking door sample sound ridiculously cool. Easily one of the years most promising tracks, who knows where they go from here.

A 'bedroom project' from Edinburgh which sounds far, far greater than that. Lush synths, wonderful production and a show-stopping voice which is part Daniel Rossen, part Wild Beasts. Promises to be something very special indeed.

Two brothers from Nashville who only started working together after growing up and living separate lives for a while. One used to be in a metal band and the other in a pop band, but this project is all about delicate and lovingly crafted electro-pop, that will make your heart race.

A Spanish producer whose debut track, Fantasy, completely blew me away. An opening minute of soft synths gives way to a beautifully soft bed of beats, beeps and blips, intertwined with cut-vocal samples that jump out like melodic whispers in the ears. Escapism of the most dreamiest nature.

The man behind one of the finest debut singles of the year is another young and ridiculously talented producer. Drive (Part 1) is a dark and throbbing piece of dense electronica with silky R'n'B vocals. Music for the night.

A somewhat secretive duo who craft woozy and romantic pop music. Their tender balladary is a perfect soundtrack to a grey afternoon; heartfelt and mellow, it drifts by in a quietened state but stays with you for far longer than you initally expect. Their debut EP drops later this year.

AKW is Alex Wisner, and she's been making music in varying forms since childhood. Her new project - a collaboration with Adam Cude and Cassidy Turbin - takes the crippling intimacy of Daughter and turns everything up. It's poetic and heart-wrenching pop music that steers well clear of triteness simply through the weight of its convictions. The 'Last Lines' EP is out now.

A 'mysterious' producer from Ireland who has just released his/her debut EP, I Cry, via the wonderful Champion Sound Recordings. The Burial comparison is an easy one to jump to, but the mix of dark beats and classic house music is great enough in it's own right to avoid constant comparisons.

With the right breaks Lorine could be the biggest pop-star on the planet. The cool of Jessie Ware with gloriously minimal production and a voice that could melt the hardest of hearts. A soul-stirring take on classic R'n'B and bucket loads of that stuff we used to call X-Factor before Simon Cowell shat all over it.

This brilliant band from Glasgow actually released their debut record at the end of last year but it's still going strong. Like Belle & Sebastian jamming with Orange Juice, it already sounds like a 'classic Scottish album'; slightly messy, wonderfully scuzzy and yet strangely beautiful. One of the best new 'guitar bands' I've heard in a long time.

Eight songs of finely poised arrangements that positively drift by; sounding at once like they're playing from a dusty old 1950?s gramophone, but also simply hanging in the air around you. The vocals are heart-breaking, while the atmosphere is sometimes too weighty to take it all in at once. Belle Mare stop me in my tracks everytime I listen to them.

The debut single from this Brooklyn trio is HUGE. A big slab of guitar drives through the track while the emotive vocals crawl along and the whole thing shimmers with a gorgeous glow. Guitar music is dead.

A new band from Edinburgh who released their debut 7" through the always-great Song, By Toad records at the back-end of July. The trio excel in making dark and delirious pop music that feels quite minimal, but always like it's just about to explode into something terrifying. Which is always the best way to be, right?

Ancient Mariner is Gabriel Jorgensen, and his debut EP was recorded in a small cabin in the Rocky Mountains. Inspired by the likes of St. Vincent and Andrew Bird his music is rich, warm and occasionally huge; marrying hushed intimate moments with blood-pumping crescendo's.

More greatness from Brooklyn. This one is the project of Andrew Gregory, with lead vocals from Kate Copeland. Stirring indie-guitar riffs, world-weary vocals and then, all of a sudden, big playful synths that take the tracks somewhere else entirely. Kinda like CHVRCHES; they could be huge with the right breaks.