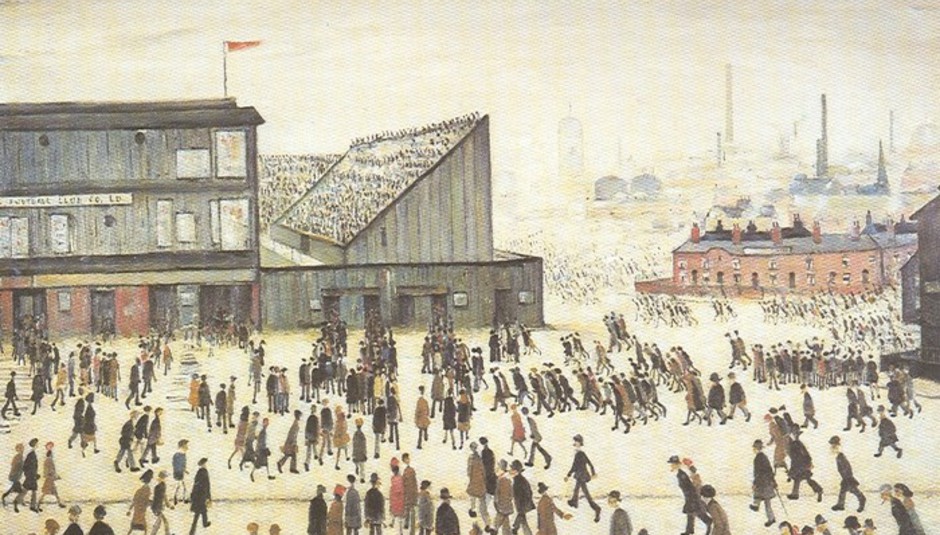 Some Goals Are Bigger Than Others: Drowned in Football

Some Goals Are Bigger Than Others: Drowned in Football

Introducing a new column on football and music for Drowned In Sound by Greg Johnson, co-editor of The False Nine...

Football: it can do strange things to people with other interests. Only last month David Newbury told readers of The Independent that "music and sport are nemeses that should never meet", going on to dismiss football as "the nouveau riche in shorts gurning to Kasabian."

Firstly, what’s wrong with a bit of gurning? And secondly, regardless of the clearly traumatic memories Newbury has conjured up from his socially segregated days surviving on the playground, the huge number of overlaps between football and music make it difficult to know where to begin when dismissing his daft tribalism. Even those with a basic grasp of pop history should be able to identify the indelible connections that have implanted Baddiel, Skinner and The Lightning Seeds’ Three Lions into the national consciousness, and once upon a time saw The Fall’s Theme From Sparta FC sound tracking Saturday afternoon coverage on the BBC. A quick YouTube search will deliver you Mark E Smith reading out the classified results on an edition of the very same programme.

Even the picture Newbury attempts to paint of the philistine, ball chasing townies versus his brooding, culturally literate crew of wall-leaning hipsters is flawed. His bright young, anti-footballer is adorned in a Joy Division t-shirt, a band, like many born of the various Manchester scenes, fully in-sync with football and music’s special relationship. From the vocal support and pre-match soundtracks provided by Oasis and The Stone Roses to Manchester City and United respectively, through to the aforementioned Joy Division and their transformation into New Order –who could forget World In Motion? – football has never been too far from the music or music makers.

Over on Merseyside, music flows through the sentiments and soul of Liverpool’s football culture, from the emotionally charged You’ll Never Walk Alone to the all-encompassing sense of civic Scouse pride that runs through The Beatles, Bill Shankly, Howard Kendall and the numerous trophies won for both Everton and Liverpool FC. Even Kraftwerk are known admirers and players of the sport, and they’re hardly alone in their fandom for the game. Make reference to Rod Stewart firing footballs into his audience and weeping as Celtic beat Barcelona, or Louis Tomlinson signing for Doncaster Rovers if you must.

Going beyond such surface details, other more structural parallels exist. At its commercial zenith, attendances are comparable to music festivals. Matches themselves offer up goals and dramas on par with blockbuster movies. Players are appreciated like artists and personalities in their own right. Match reports and album reviews share some common ground when it comes to judging a performance for quality, entertainment, originality and the like. Elite level players now enjoy the decadent lifestyles once reserved for the rockstar class. Beneath the mega-rich Premier League, the state of the game is often as DIY and community focused as any vibrant local music scene; sometimes even more so. Selfless football coaches are the independent record label owners, helping talented youngsters realise their potential and gain some valuable life lessons along the way.

At a more abstract level, football can tell stories, create beauty and inspire great levels of feeling and emotion. Such is its vast scale, the game is both as mainstream as any mass consumed media and yet as underground and counter-cultural as any artform you can find. Football’s regrettable hooligan culture was plugged into the same untamed rage and distorted masculinity as the skinheads who similarly co-opted punk and two-tone for their own twisted ends. On the other hand, fan ownership and campaigns for supporters rights are the positive side of the rebellious, democratising potential of cultural and identity politics.

It’s about time football was afforded the same courtesies as the cultural mediums it often dwarfs for popularity, social impact and emotional agency – factors commonly used to try and legitimise other activities as worthy arenas of expression and artistic merit. A bi-monthly column on Drowned In Sound is the least we can do to level the playing field. After all, with their fetish for the obscure and esoteric, football geeks and hipsters are the new musos.

Let’s not all be confrontational fantasists like David Newbury, or agents for gentrification like Southbank skater hater Billy Bragg. Sniffy, parochial elitism is for people convinced of their own cultural superiority and whose ilk used to believe nothing of worth existed outside of the opera house. Anyone who has spent even the briefest amount of time by a large patch of grass will have witnessed the improvised eco-systems of unlikely characters that congregate to take part in the equal-opportunity activity of playing football, especially in the summer months. Watching a black clad Celtic Frost aficionado tearing down the left wing to deliver a bundled, corpse paint stained cross to his makeshift teammate – dressed in track suit bottoms and Argos quality neck chain – lurching into the box to get a head on the delivery, is one of modern life’s great spectacles.

Equally, great goals stick in the mind (and in the gut) just like great gigs, and it’s about time we granted football the right to deal in the same cultural currency as music. With the new season already underway, football is coming home once again. Don’t abandon it to the hate crimes of Embrace’s World At Your Feet – such abuses threaten us all. Instead, don your Joy Division t-shirt and leather jacket and kick (the ball) against the pricks.

Look out for Greg's first column next week, featuring an interview with Stuart Braithwaite of Mogwai on Zidane, football and music.

Some Goals Are Bigger Than Others #1:...