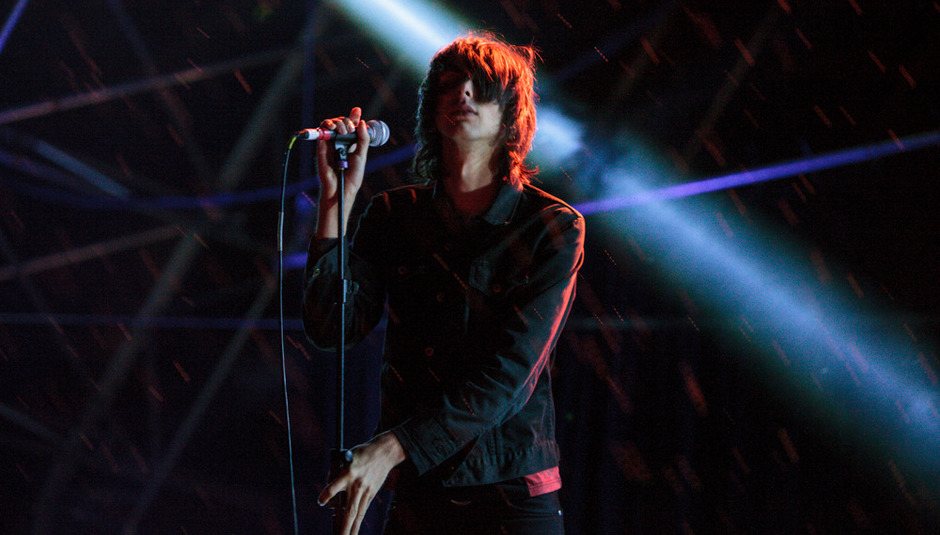 If anyone had suggested five years ago that The Horrors would be headlining a UK festival in 2013 people would have laughed at them. That they've since gone on to create two of the most progressive and definitive records of the 21st Century, whilst arguably becoming the UK's most influential guitar band in the process, speaks volumes. Whereas Primary Colours was a completely unexpected bolt out the blue when it landed in 2009, Skying's arrival two years later enhanced their reputation even further. They've spent most of the interim period playing as many live shows as is humanly possible, the majority of which have served as momentous events rather than bog-standard 'gigs'. So, with an as-yet untitled fourth album on the horizon it makes perfect sense for The Horrors to make a similar step up to those achieved by Foals at Latitude and Mumford & Sons at Glastonbury - albeit on a smaller scale.

Topping this year's bill at Derbyshire's Y Not Festival alongside The Cribs and The Darkness marks a coming of age for a band many predicted would struggle to survive after first long player Strange House failed to live up to the hype. Indeed, expectations are so high for their next album, the band themselves have taken stock of the recording process and several steps back in delaying its release until next year to ensure the finished product meets those high standards.

Nevertheless, having debuted a brace of new songs at Truck Festival two weeks ago, we're here this evening hoping for a sneak preview of what to expect in 2014. However, that tonight's performance even goes ahead owes much to the persistence and commitment of Y Not's organisational team. The great British weather at one point threatened to bring not only the evening's proceedings but the overall event itself to a premature end as torrential rain and thunder storms cause the site to be fully evacuated for safety reasons, curtailing both the Mystery Jets and Dan Le Sac vs Scroobius Pip's sets as revellers fled for the drier confines of the campsites and car park.

With the site now resembling a mud bath and rain still falling by the bucketload, it's to the organisers' credit that the festival resumes at all. Albeit later than scheduled, when The Horrors do finally appear, approximately half an hour later than advertised, curfews mean their set has to be revised and cut accordingly to fit what's left of the allotted time. Which basically means the one new song they had intended to play, 'Elixir Spring', finds itself omitted. Favouring the more familiar approach, tonight's set consists of Primary Colours and Skying material only.

As has been the case for the majority of their shows since Primary Colours relaunched them as a brand new entity, 'Mirror's Image' and 'Who Can Say' open the show. As punters flood back down to the main stage, some blissfully unaware that The Horrors performance is even going ahead, it becomes a mad scramble to reach the front. Treacherous conditions underfoot ensuring several lose their footing, 'I Can See Through You' and 'Sea Within A Sea' still resonate incisively with an audience determined to have the time of their lives come rain or shine. Sounding impeccable throughout, it's easy to see why The Horrors can now hold their own as a headline act. 'Still Life' further accentuating their presence as a uniting force, each and every one of the several thousand gathered here bellowing back its "When you wake up, you will find me!" refrain in unison. Before launching into 'Moving Further Away' which closes their set, frontman Faris Badwan thanks everyone for their patience. He needn't have worried, as the response to its elongated instrumental build-up towards the song's finale suggests most would have been happy to stick around and party til sunrise.

An unmitigated triumph then, and one which looks certain to be repeated on many bigger stages this time next year.