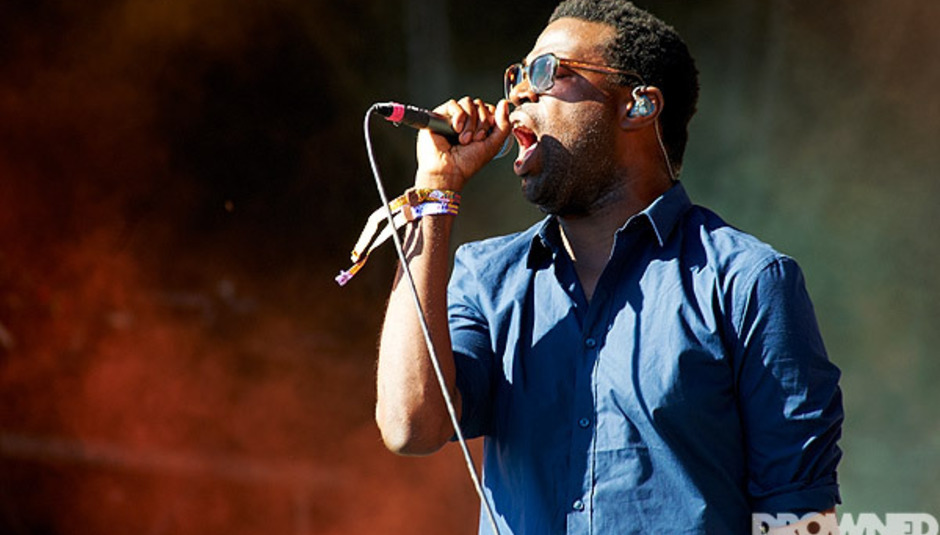 Hello. It's time to get your fill of the week's best new single releases and other songs that have emerged from the creative void over the past seven days.

Below you'll find Jay Z doing a merry jig with Marina Abramovic, Deaf Club getting rather morose and Cut Copy doing their rave-pop thing in outstanding fashion. There's also a new video from Chance The Rapper who has a neat way of letting rip with syllables and synonyms.

Most importantly, TV On The Radio have returned with their first track since Nine Types of Light and want to reinvent the way we consume music. It's an ambitious undertaking, but could 'Mercy' be equal to the task? Read on to find out. "Somewhere along the line music became 'content'... It's my full intention to bring it back to music again!”

When Dave Sitek first penned this mission statement for his record label, Federal Prism, he was not fucking about. ‘Mercy’ makes that abundantly clear. TV On The Radio are here to spearhead a revolution, and they’ve got their best single in years to win over the unbelievers.

Of course, jaded musicians come two a penny. Jack White has been preaching an insufferably 'authentic' gospel for what seems like an eternity. The difference with Dave is that he does have a point.

As album sales remain in freefall, ad-syncs, exclusive sessions and guest blogs have been positioned as the new way to get paid. ‘Content’ is now king and even Minor Threat are happy to reside in Urban Outfitters’ ivory towers.

To quote frontman Ian MacKaye, "Motherfuckers pay $28; that's what they wanna pay for their shirts." If a songwriter gets to put dinner on the table because of their LOL-tastic Twitter feed, you’d have to be a rarefied class of arsehole to shout ‘sell out’. What’s more concerning is the culture: good music is no longer enough.

‘Mercy’s response to this rampant commercialism is a bold technological embrace. It was premiered through The Huffington Post’s Instagram account, its stems are available to download through Soundcloud and, although its 45 RPM cover art hints at a vinyl release, there is no way of buying the track in the UK for actual money.

It’s a grand subversion of the ‘more is more’ mindset, where a similar amount of content is delivered and you’re free to do as you please with it. Dave Sitek won’t allow you to sit back passively and consume his slick cut of gothic new wave. You have to participate in it by creating a remix, writing an 800 word think piece and parting with your cash when the time is right.

To its credit, the Federal Prism project isn’t trying to put the oversharing genie back in its bottle. It’s trying to subvert the concept so that people participate in something bigger than a hashtag; better to create a new era of glory days than hark back to the past.

Trouble is, can anyone be bothered with all that? Most people want to consume content in bitesized chunks; the rest want to strip away the noise completely.

“I don't want you to see me in the studio looking like an arse, having just got out of bed! The more information you give people, the more the magic goes out of the music.”

For a middle-aged luddite, Noel Gallagher occasionally talks a lot of sense. The play counts for 'Mercy’s stems barely compare to the embeddable version below and that’s before you take into the alternative, locked up stream that’s debuted across several major music sites. The thrill of experiencing ‘Mercy’ is confined to its final incarnation. Everything else is either window dressing or an unwanted peak into the meat factory.

While you can pick flaws in TV On The Radio’s latest campaign, ‘Mercy’ itself is flawless. Immediately arresting and thrillingly propulsive, the band seem to have stripped away their artisan ambitions in favour of a FM-friendly sheen that could happily soundtrack one of Ryan Gosling’s celluloid killing sprees. There’s no grand political message to bog down the track in rhetoric, just an incessant BPM-rate that daren’t pause for breath lest it succumbs to the swirl of demonic synth and strident guitar surrounding it.

In the hands of Interscope, ‘Mercy’ could have been a hit single. Now TV On The Radio are out on their own and fancy free, who knows what its fate will be. Certainly, when Kyp Malone pleas for the fate of his sinner’s soul it puts a glaring spotlight on the pre-meditated rebellion pedalled by Miley Cyrus, Rizzle Kicks and so many others.

Of course, the difference between those acts and Dave Sitek’s collective is that they have more content, greater brand synergy and a bigger promotional budget. The Brooklyn-based four-piece have a song that you can listen to in any way you want, and that doesn’t really cut it these days. Not if you want to hit the Number 1 spot.

Thankfully, this isn’t what TV On The Radio are aiming for. Content is temporary. That surge of endorphins you experience when ‘Mercy’ first roars into life is a rare sensation to be savoured. Technology can make these moments easier to come by; it cannot engineer them.

Ultimately, Dave Sitek knows this. It’s why he concluded Federal Prism’s manifesto with this declaration...

“The goal is to ride into the sunset, stereo blasting, and all of what's got you worried will disappear in the rear view mirror! If you can feel what I'm saying, this music is for you."

Speaking as someone who has an ‘emergency Cut Copy’ button pinned to the top of their web browser, the unveiling of ‘Let Me Show You’ is a very big deal indeed. A continuation of the sprawling electronica that marked Zonoscope’s closing track, ‘Sun God’, it gallivants across sprawling fields of house and dub before climaxing in what can only be described as a ‘bass bonanza’. This is the kind of shameless grandstanding I’d slam will.i.am for, but he is will.i.am and Cut Copy are amazing.

After almost a year of radio silence, Deaf Club have returned with a brand new EP - Take In Colour - that’s about as life-affirming as a funeral march. ‘April’ is the lead single and be warned, its stark brand of tremolo-laden miserabilia will submerge you in sadness until it’s a bit too overwhelming. Luckily, the song is only four minutes long so you can dive straight in again. Humans, eh? We do love to wallow in self-pity.

Chance The Rapper - Everybody's Something

There are many reasons why you should get familiar with Chance The Rapper.

1) The way he slurs his words like a drunk Elmer Fudd from Looney Tunes. 2) His tendency to flits between philosophical musings and tales of Chi-Town hardship. 3) His Acid Rap mixtape from which ‘Everybody’s Somebody’ is a particular highlight.

Above everything else, a rapper named Chancelor Bennett deserves to be celebrated in the most jubilant terms possible.

To promote his (sort of) okay Magna Carta... Holy Grail track ‘Picasso Baby’, Jay Z has done an art and filmed it. The art in question is him rapping the same song over and over again at a load of famous people in New York City's Pace Gallery. In fairness, this showmanship makes for a thoroughly entertaining video and there were some plebs in attendance at the six hour event too. It’s just you don’t really see many of them and Sean Carter is in the business of preserving his relevance by association.

Splendour in the Grass Festival, Aust...