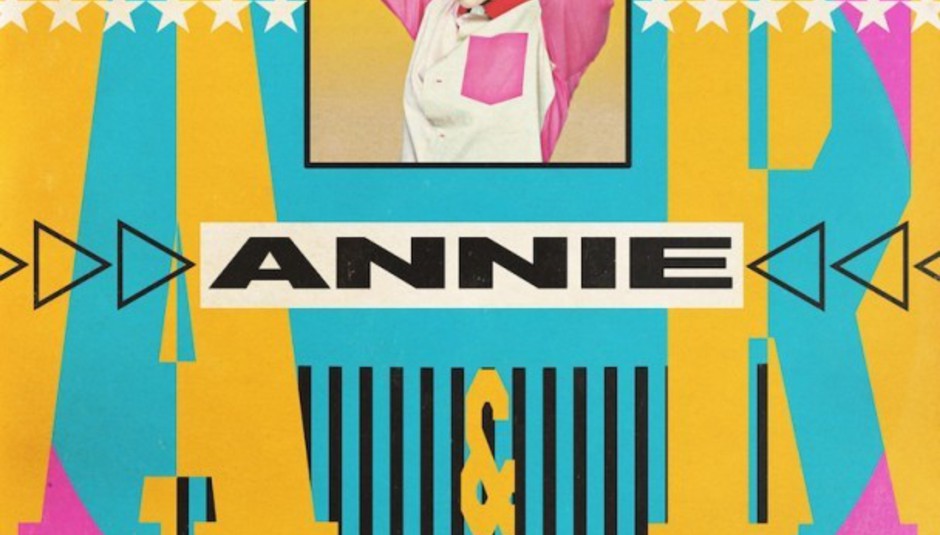 This week Jaws are summoning guitar swells the size of St. Peter's Basilica, The Vaccines have picked up some West Coast vibrations and PINS are staking their claim to be quite something with a double A-side single.

There's also a brand new EP from Annie, which you really should get to learn and love.

Annie - Back Together (Pleasure Masters) You’ve heard the ‘cult classic’ story before, right? Enough times to know it rarely has a happy ending.

Jeff Mangum. Jonathan Richman. John McKeown. They’re all familiar enough with the concept of fleeting success and longstanding influence. So is Annie.

Sat alongside The Streets and The Futureheads on 679 Recordings, her debut album Anniemal was the victim of disastrous timing. While your average music junkie still agonised over Pete and Carl’s tempestuous friendship, there could be no room for Norwegian synth-pop sensibility. Once Down In Albion had been and gone, the floodgates were open for an onslaught of electronic-minded sirens with icy vocal tones. You know the ones.

Meanwhile, Annie was cast aside from her Warner Music-funded home and thrust out into the great pop wilderness. The songs she’d written with Richard X were left to circulate via teenage mixtapes and ‘Whatever happened to...’ forum threads. Anniemal became the kind of album you could strike up an instantaneous friendship over, with frenetic chatter proving to be a hyperactive cocktail of swearing and superlatives.

Nine years and an underappreciated second LP later, the appeal of Annie’s debut remains undiminished. It was enough to make you wonder what might happen if the duo reunited for a proper collaboration. For old times sake....

Behold The A&R EP. A five-song double-headed effort from Annie & Richard X that’s indisputably brilliant and the highlight of which is ‘Back Together’. Blending together classic house piano and fizzing Casio tones, it’s a welcome reintroduction to two old friends. One that sounds instantly familiar and yet subtly removed from the sass-filled larks of ‘Chewing Gum’ and ‘Me Plus One’.

With 'Back Together', Annie’s harking back to ‘Heartbeat’ and that timeless sensation of losing yourself to loud music and jubilant vibes. It’s enough to make you tune the office stereo into your local pirate radio station and demand everyone prise their eyes from Microsoft Excel to rave along. Especially when the track’s middle eight hits home and a giddy swarm of high-pitched effects fizz round your ears like a Hi-NRG version of The Magic Roundabout’s theme tune.

“Brings us together and keeps us strong,” sings Annie in blissful fashion. “When we’re together the music plays on.”

Few cult concerns get to move on from what first defined them. Most don’t even bother. With ‘Back Together’, you at least feel like there’s a new conclusion to that same old Anniemal conversation..

Brummie cousins of Swim Deep and Peace, Jaws have taken a stonking leap forward from their Milkshake EP with ‘Gold’. Doused in adolescent gusto and propped up by a monstrous guitar riff, it seesaws between cacophonic noise and ponderous quiet with emphatic purpose. Another one of these and they’ll be edging on ‘new favourite band’ territory. For the meantime, be sure to let its raucous fervor ricochet through your eardrums.

By all accounts The Vaccines appearing to be ‘doing a Horrors’ and garnering some begrudging critical respect off the back of their forthcoming Melody Calling EP. Your humble singles reviewer finds this turn of events mildly perplexing, not because its title track and ‘Everybody’s Gonna Let You Down’ are bad songs; they’re the kind of untaxing earworms that Justin Young and co have always excelled in writing.

What I find a tad bizarre is how having turned to the louch, Americanised sound you’d usually expect from a Kurt Vile record, The Vaccines are now okay. Would the same have happened if they’d cribbed from The Field Mice or Edwyn Collins? I’m not so sure.

Double A-side singles are the very height of bravado. They’re a band’s way of saying, “We know we’ve technically got to pick a B-side but all our songs are fucking phenomenal, alright?”

I'm not inclined to argue with PINS’ and, even I was, the way Lois McDonald brandishes a baseball bat in ‘Stay True’s video indicates it’s my best interests not to. A stark slice of garage rock, it’s slow and purposeful like a shiv to the belly; minus any loathsome internal bleeding. Taken together with the similarly scuzzy, slightly more upbeat ‘Get With Me’, you’d have be an absolute numpty not be jazzed for the arrival of their debut album Girls Like Us in September.

Admittedly, this is yet another song where The Weeknd croons about sexing a young lady while aided by a foreboding electro fog that’s designed to hint at all manner of sin. The difference is that rather than being a rip off of Portishead’s ‘Machine Gun’ or just plain rubbish, ‘Odd Look’ was penned by Kavinsky of ‘Nightcall’ from Drive fame. Therefore, it sounds distinct enough for Abel Tesfaye to engage in existential wang chat for the umpteenth time and get away with it. The fiend!

Remember Those Dancing Days? Want to know what two of them are up to now?

If your answer to either of the above questions was ‘yes’, then you should try ‘Vision Tricks’ on for size. If you fancy some Siouxsie and the Banshees-esque gothic pop in your life, you’d also be well advised to give it a spin. If you... oh, just listen to the bloody thing will you.

“Fuck your romance, I wanna pretend that Jenny Lee Lindberg is my girlfriend.”

It was a classic line in May last year... and it still is.

Out of a record contract.

Exorcising the Ghosts of Past, Presen...