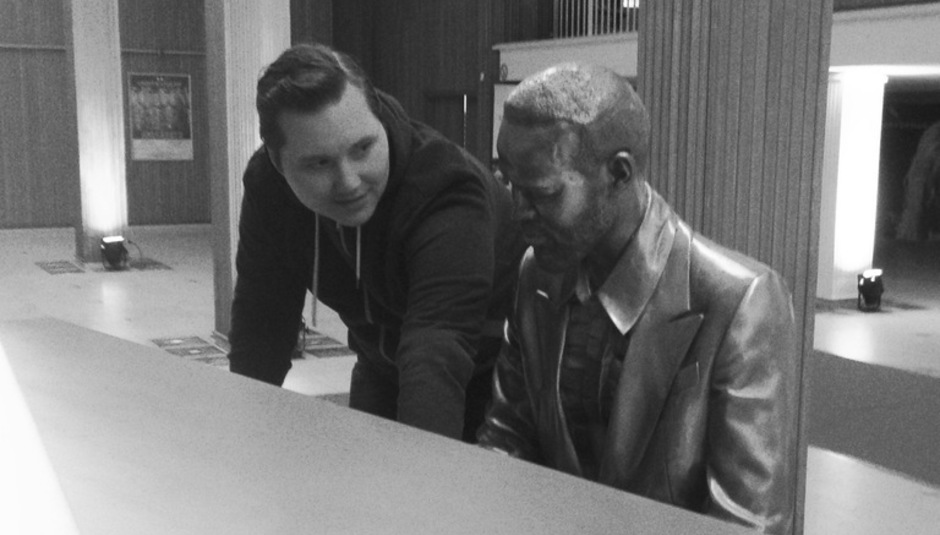 DiS is in Ostend, a sleepy seaside city on the coast of Belgium, not far from Bruges and close to the Dutch border. If we were being charitable we’d say it was the Belgian equivalent of Brighton, although a more realistic comparison would be a slightly funkier Bournemouth. But Ostend has Soul. There’s bars on the local strip where soul classics pump out every night, the Casino here has featured concerts from every legend going, and there’s club nights and memorabilia everywhere you turn. We’ve come to Belgium to learn about Marvin Gaye, which is one of the weirder sentences you expect to write as a music journalist. It’s legitimate though- Ostend is a fairly interesting footnote towards the end of Gaye’s story, and the story of Marvin Gaye is basically the story of soul music.

By the early 80s, like soul itself, Marvin Gaye had fractured into a million pieces. He was washed up, drugged out, underselling, overweight, mid-divorce and promoting an album Motown hadn’t even bothered to let him finish. Belgian concert promoter Freddy Cousaert met Gaye in London, a bloated wreck, and took it upon himself to improve the lot of the fallen star. Gaye would later say he “didn’t even know where Belgium was”, but that he “left it to the hand of God”. The hand of God, it seems, fancied a waffle. Gaye boarded the Southampton Ferry in the spring of 1981 with his son Frankie, heading to the sleepy fishing town of Ostend to be guests of Cousaert, staying in his house, and joining his family.

Cousaert kick-started a remarkable healing process. Gaye stayed in Belgium for nearly two years, walking the lonely, windy beaches, boxing at the local gym, eating in the local bars and praying at the local church. He became something of a feature of the town, he’s even captured in effigy: there’s a life-sized golden statue of him playing a grand piano in the lobby of the casino where he played a warmly received, if under-attended comeback show in 1982. You can’t move in Ostend for Marvin-mania. We’re fed Gaye’s favourite food (It’s a tasty, if kind-of ordinary chicken curry) and shown his favourite haunts. There’s a two-hour walking tour via iPhone app that takes you to the various hotels, apartments, gyms and churches in which Gaye had lived, worked or hung out, interspersed with clips from the contemporary Transit Ostend documentary, complete with linking narration from, of all people, beat-boxing soul singer Jamie Lidell. The video shows a melancholy, reflective Gaye trying to make sense of his place in the world. “There are plenty of places i’d like to be rather than Ostend” Gaye once said “but this where I need to be”.

It’s easy to be cynical or dismissive of Cousaert and Ostend’s role in the Marvin Gaye story, but it earns the its place with some justification. Cousaert was no Berry Gordy, but he did hook his new friend up with local musicians, recording time and business contacts, ultimately helping to extract Gaye from the Motown contract he’d been tied into since the mid 60s and inspiring a burst of creativity and credibility many felt were behind him. It was in this unlikely exile that Rolling Stone writer David Ritz tracked the now elusive Gaye down for an interview, and noticing the soul legends prestigious porn collection commented that he needed “Sexual Healing”. Ritz was then temporarily blinded by the light bulb that appeared over the soul legend’s head. The entire Midnight Love album (listen via the Spotify player below), Gaye’s final and something of a last hurrah, was written and recorded in Belgium. Indeed, it was only visa issues that eventually forced the cleaned-up Marvin back to the USA.

The story of course, has something of a downbeat ending. The cast of characters that helped the star back to creative health in Europe remained largely underappreciated, the Belgian musicians whose jams had been the genesis of Midnight Love were replaced on the record by seasoned session pros flown over from the states. Despite his work Freddy Cousaert received little in the way of financial kick-back from his association with the soul legend, outside of the gigs he’d promoted. Gaye never returned to Belgium, or really acknowledged his time there.

Once back on the road, with a successful record and one final stone cold classic in ‘Sexual Healing’ under his belt the singer would fall back into a severe coke habit, growing increasingly paranoid during a grueling tour schedule. A mere 18 months after leaving Ostend Marvin Gaye would goad his own father into shooting him in the chest with the pistol he’d given him as a Christmas present. His final words, whispered to his brother Frankie as he lay dying were reportedly “I’ve run my race... there’s no more left in me”. Arguably the greatest male voice of the Motown era died at just 44.

When you look back on the life of Marvin Gaye, soul superstar, it’s obviously not Belgium you think of first. Most people don’t even know of the connection, but It’s a connection the town of Ostend is justifiably proud of. Before he came here Gaye was in the gutter, and when he left it was the gutter found him all over again. Ostend gave him his last respite, the creative breathing space to make one more gem, to let that voice work it’s magic a final time. It’s appropriate enough that his final classic track was birthed here- sexual or not, what Marvin Gaye found in Belgium was healing all the same.

For more info visit marvingaye.be/en and visitoostende.be/en. You can get to Ostend by train via Eurostar.