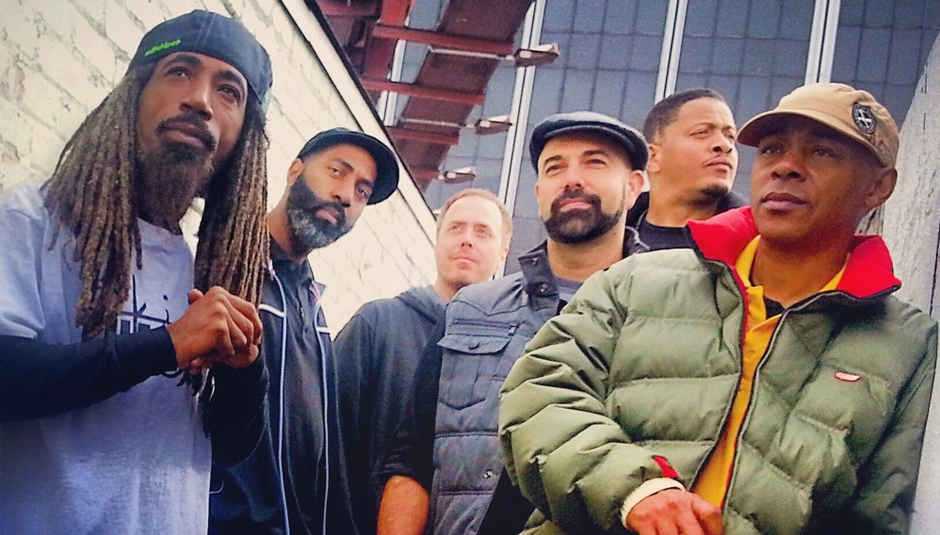 Jurassic 5 formed 19 years ago, releasing their eponymous debut in 1998. It shone on the radio waves as the now famous duo of Cut Chemist (Lucas Macfadden) and DJ Nu-Mark (Mark Potsic), fronted by the MC troupe of Chali 2na, Mark 7even, Akil and Zaakir, cut and sampled funk loops from the past into a sound that stood like rainbows over the dominant gangsta’ rap landscape of the time. With four MC’s chanting in unison, it was the sound of hip-hop as peacemaker and historian.

With their leftfield approach, more akin to The Pharcyde, pre-Fergie Black Eyed Peas and with an East Coast De La Soul and Digable Planets tinge, initially Europe picked them up as a hot ticket. A fantasy swallowing US public was happy to watch gangsta’ rap talk shop, enthralled by the garish theatre of T & A, bling and bullets. In eight years the band released four albums that momentarily moved hip-hop out of the ghetto before the band imploded.

Having created a public and critical crescendo with their third album, Power In Numbers, the band lost the Cut Chemist before their final album, Feedback, dropped in 2006. An album with a more electronic sound, the band decided to call it a day after internal feelings prevented a full touring schedule for the release. In retrospect it’s as fresh and addictive an album as they’ve released, but it was unable to pull them through a period of uncertainty and frustration.

Seven years and numerous solo projects on and the band have returned, not to provide new music but to perform together. Huddled in the production office of the Brixton Academy before a sold out show, the Cut Chemist - tired and hunched over a pair of too-small blue shorts that he’s later to wear on stage in an Angus Young tribute - and DJ Nu-Mark take some time to discuss their reformation and asses if there’s a desire for them to establish their place in music once more.

DiS – Seven years on since your step away from music as J5, it’s great to have you back. Have things changed for you all in that time? Have you been either surprised by how different things are between you or oppositely, how similar they are from you last performances together?

Nu-Mark – Really, it’s like nothing has changed. That’s surprising in its own way. It was like stepping back together with no time having really passed. We’re obviously different people and I, hesitantly, say more grown up, but performance wise we’ve really connected as well as ever and, if anything, the MC’s are even better. The show we did in Birmingham, I think it was, whoah - they were really on fire.

DiS – How much time did it take to get the J5 machine back up and running?

Cut Chemist – Not very long, we only had a few rehearsals.

Nu-Mark – Six rehearsals, that was all. Six rehearsals as a whole band. Marcus and I saw each other something like every day for a month to work on putting the music together, getting the songs straight before we rehearsed as band.

Cut Chemist – The music took time. So when we said we rehearsed six times… we actually put everything together very meticulously and precisely in advance.

DiS – The story is well known that the requests for you guys to play never really stopped. Was there anything beyond a sense of giving in to this demand that got you together this time, something more personal?

Cut Chemist – No, not really. There isn’t really anything profound to it. We’d always taken the asks as a good thing, something positive. More people wanted to do it this time round. That’s all there was to it really.

Nu-Mark – The idea of performing again as J5 was exciting. That’s enough.

DiS – And Coachella seemed like a good place to reform. What informed the decision to play there and how was it on stage, were you nervous, did it go smoothly?

Cut Chemist – We knew we’d need a platform to make a comeback from and Coachella seemed like the right one. It’s a big thing and that works for us to get a good amount of attention. We knew we wanted a launch pad. There were issues, but once we were on stage everything went great, it was a great show.

Nu-Mark – For a part of the show I wear a turntable around my neck, and it’s a vintage turntable. 10 minutes before stage time the deck gets dropped and the stylus breaks. That was a problem! Thankfully we were able to get a new stylus in there with super glue and it worked. At the same time as this is happening Paul McCartney’s side stage so I shout to him asking if I can have my photo taken with him, he winks at me. You gotta’ have your priorities. It all worked out. I had a great time, 60,000 people were there and they all seemed to have a good time, so we were happy.

DiS – A slew of shows in and everything’s going well, is it encouraging you to get back in the studio, do you have any sounds in your head for what a next record might sound like if you were to consider one?

Cut Chemist – We’re not there yet. We’re not thinking about more music. We’re happy to be playing shows and with the responses we’ve been getting. The shows are selling out so we know that there’s a fan base; 60,000 people turn up to Coachella and they don’t leave halfway through, so that’s promising. If we were to consider more music or a product, it feels like there would be a fanbase that would be there for us, that’s encouraging. We’re very nearly at 20 years, so there should be a proper 20 year anniversary, there should be a product for that, a musical release or merchandise. We’ll have to do this all again.

DiS – The way music is consumed, and the taste of today is very different from when ‘Feedback’ dropped and before then. Do you like what you hear now and would a J5 release work the current download culture?

Cut Chemist – What I like is that genres of music seem to be disappearing or merging. I guess that people are shuffling through songs, so their ears are blending things together in new ways. That’s exciting.

Cut Chemist – Music doesn’t seem to be made using samples any more. Everything is written on synthesisers and computers. When I first got into music it was because because of sampling and scratching so for me… it’s interesting as I have to think a lot about how I can remain relevant, or where my place is as I’m from a turntable and sample background.

DiS – And if there were any J5 music, how would you get it to the fans?

Nu-Mark – With my last solo album I also put out a steady series of tracks for download or 10” - the Sunlight Series. That had a drip approach of regular monthly content and was exciting to be involved in releasing music that way. I was happy with how that went. That could be something we could consider.

DiS – How are you getting on as a group of individual spending time together?

Cut Chemist – Great. We’ve had time away to do our own thing. We’re older, I won’t say how old but when you’re in your Twenties you’re hot headed, so disagreements start quicker. Now there isn’t that quickness to react, we talk more, it’s cool.

Nu-Mark – You cold say we’re all more refined. You could say that.

Cut Chemist – For now. After these shows we’ll take some time off, concentrate on our own stuff, which helps support the J5 brand and see what happens. We want to connect with our fans live. There could be product in the future, which might be a regular download or release, but for now we’re happy with the J5 experience being the shows and time on the road. It’s great to be performing for fans again.

Nu-Mark – Nothing to add. Well said!