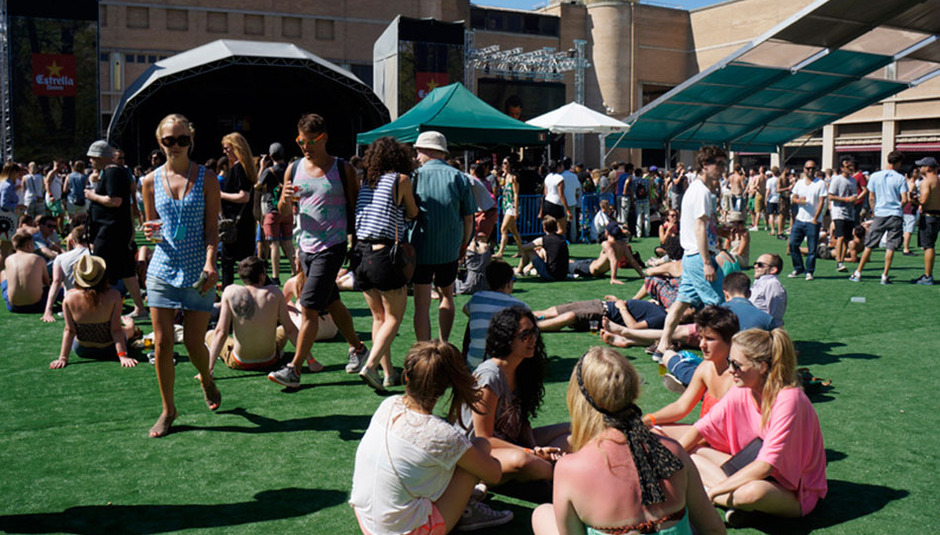 Maybe it’s because most of what I already knew about Barcelona was based on a level of Tony Hawk’s..., but I was impressed by Sónar’s host city. Despite their crippled economy, staggeringly high unemployment, and increasingly fierce campaign for Catalonian independence (or perhaps because of it - Sónar apparently brings in around €52 million), Barcelona was evidently embracing the festival's twentieth anniversary festivities.

This year, Sónar by Day debuted its new location by Montjuïc magic fountains and the Palau Nacional (leaving both holidaying families and monged festival-goers confused by each other’s presence in the surrounding streets), with fewer queues and crowding than ever before.

Closing out Thursday’s music, Lindstrom and Todd Terje impressed with a live set of scorching, irresistible disco as the sun set. Of course ‘Inspector Norse’ brought the house down, but ‘Snooze 4 Love’ and ‘Lanzarote’ stood out too, and their rework of Whitney Houston’s ‘I Wanna Dance With Somebody’ was an infectious, perfectly absurd, end to the day.

The best of Friday came from Elektro Guzzi and Diamond Version; the former creating devastating soulful techno from nothing more than the unlikely tools of a three-piece rock band, whilst the latter sent dark glitch and minimal loops throbbing through the crowd’s ears and chests.

Chromatics, in one of the Day line-up’s most anticipated appearances, put on an absolute masterclass during their Saturday afternoon slot, with most of the crowd looking as though they’d dragged themselves to the show after mere minutes of sleep, determined to catch a band who were arguably slightly out of place amongst all the house and techno, let alone the glaring sunshine. Kill For Love songs dominated, alongside a delicious cover of Kate Bush's ‘Running Up That Hill’. A sultry, majestic end to their European tour.

Finally, closing Sónar by Day, and following on from the Friday night’s EDM onslaught, came the gurgling trap of TNGHT. Hudson Mohawk and Lunice doled out the drops as they danced beneath a fairly conservative light show and an onslaught of bass. Earworm ‘Goooo’ was colossal, and closer ‘Higher Ground’ gave the soundsystem the most strenuous workout of the weekend.

Whilst Sónar’s daytime incarnation retains a classic festival vibe (sunshine, fake grass), Sónar by Night has a completely different atmosphere. More a rave than a festival, it takes place in a series of enormous aircraft hangers and the roofless, walled spaces that link them. There were massive empty spaces, which came to act as chill out zones, and, if you were feeling more recklessly fucked, there were dodgems.

First then, the rather controversial presence of some of the US’s biggest EDM acts. Though there had been some pre-emptive complaints regarding Skillex’s headlining slot, he had a decent crowd, and many people seemed to be willing to give him a chance to prove them wrong. From atop his giant spaceship, Skrilly jumped around and kissed his Barça shirt, before firing off some pretty impressive lasers and 'dropping the bass'. The music didn’t stand up to the visuals. I went with an open mind, but it was repetitive and dull, despite the aggression. Earlier, Baauer put in a fun, fast DJ set (though it was rather more commercial than Sónar aficionados would have liked), but it was Diplo’s Major Lazer who triumphed, battering down any resistance with a joyously energetic performance. With confetti canons, a Wayne Coyne hamster ball, and manically gyrating dancers on stage, most of the crowd were close to drowning in their own sweat as much of the second album and the rapturously greeted ‘Get Free’ boomed out – it was a long way from typical Sónar fare, but they pulled it off with aplomb.

Next, the abundance of disco influences. Breakbot’s live bass and electric guitar brought slinky Saturday Night Fever struts to the dancefloor, whilst Justice’s DJ set, though somewhat predictable, packed the punch of ‘We Are Your Friends’, a raft of hits from †, and even the Ronettes and Diana Ross. Of course, the disco scene was ruled by the Pet Shop Boys who dominated the mainstage with the festival’s strongest visuals (sorry, Skrillex) and their high-camp power-pop. With suitably Spanish bull dancers and an array of costume changes (including an amazing disco-ball helmet for Chris Lowe), their newer records were followed by an encore that boasted more hits than anyone else on the bill: ‘It’s A Sin’, ‘Rent’, and ‘Always on My Mind’ have lost none of their irreverence and none of their hooks.

Of course, opening proceedings amid widespread excitement, were Kraftwerk, bringing the same show that a select few saw at the Tate Modern to a crowd of 10,000+. Everyone was childishly excited about the (much-photographed, suitably Eighties) 3D glasses, but the robotic Düsseldorfers opened big with a goosebump-inducing ‘We Are The Robots’, and everyone remembered quite how phenomenal it was to be watching the genre’s godfathers, more than 40 years into their career. A full length ‘Autobahn’ proved slightly inaccessible, but ‘Radioactivity’, ‘Tour de France’ and ‘Radioactivity’ were amongst other highlights, all paired with simplistic, iconic 3D images.

Despite the mutterings about EDM and the slightly poppier fare on offer, there remained a very strong 'traditional Sónar' line-up of outstanding techno. Richie Hawtin’s ENTER provided hypnotic pulsing techno, with Hawtin showering the 6am crowd in black confetti and a surprise Skrillex appearance. 2ManyDJs’ mashup set, littered with huge hits from Kavinsky to MGMT, demonstrated incredible live mixing and allowed everyone to finally lose their shit to ‘Get Lucky’.

Inevitably though, the absolute best sets came from Sónar’s core sound - veteran European techno and house producers. Paul Kalkbrenner blended new tracks with classics and dropped a phenomenal set, laden with touchstone Berlin techno. As ‘Sky and Sand’ blasted out, everyone hugged anyone within reach – a perfect conclusion and amongst Sónar 2013’s best moments. Equally impressive was Laurent Garnier’s French house, which like Hawtin, enjoyed the euphoria of the closing, sunrise slot. ‘Jacques in the Box’ is always fantastic, and closing with Prodigy’s ‘Out Of Space’ was inspired. As Garnier had played the first ever Sónar, it was a neat full-circle.

Amongst the Guadí and the rollerbladers, the lost tourists and the omnipresent Catalonian flags, lurks an utterly incredible festival. Festivals are always about euphoria; but Sónar does it best.