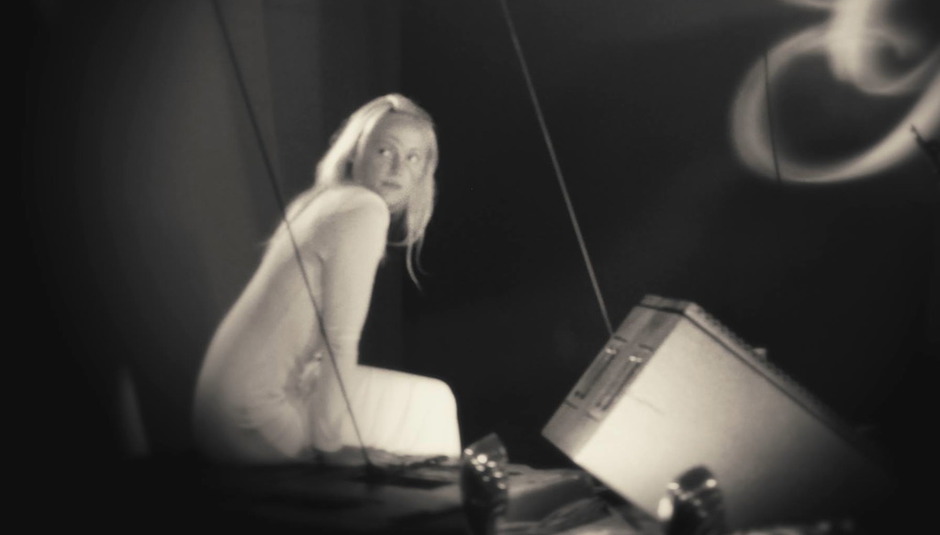 “In a world you can't get lost in”: The Escapism of Laura Marling's Grand Eagle Ball

“In a world you can't get lost in”: The Escapism of Laura Marling's Grand Eagle Ball

In a field somewhere, Mick Jagger is warming up for a headline slot on the Pyramid Stage, fervently rooster-strutting around his dressing room. Earlier in the day, Laura Robson had become the first British woman in 15 years to reach the fourth round at Wimbledon. Back home, housemates continue to lock horns. But where we are, that's all meaningless.

In truth we're only in Hackney, but from inside The Grand Eagle Hotel, nothing about the outside world seems to matter at all. Our phones have been confiscated and left on the door (along with any sense of familiarity), and we've stepped through a portal into something that's half 1920s soirée, half IRL-Cluedo. Actors playing bellboys, maids and a variety of other characters — there's a deranged woman wondering the halls, and later, I think I spot a circus muscle man—parade around the building. But we've no way of documenting it on Instagram, and certainly no way of telling Twitter. Without asking somebody sensible enough to have worn a watch, we don't even have any idea of the time. It's all very peculiar.

This, for those still in the dark, is Secret Music, Secret Cinema's excursion into the world of gig promotion. The audience is invited to a ‘secret’ location (an old schoolhouse that's been transformed into a ‘hotel’ for the purposes of this evening), to conform to a fancy-dress-code (hey, we've given ‘1920s Black Tie’ half a go), and it's requested that they bring a selection of items that will become props placed around the venue (‘flowers for Mrs Undine,’ ‘a photo of an old lover’). When they arrive, they're propelled into a promenade theatre piece - seemingly, there's something fascinating behind every single door of each of this three-floor venue. Eventually, after the audience have been given time to explore this Neverland, but before they've felt like they've understood it completely, they're ushered off to a gig.

The attention to detail is perfect. There's bars selling period cocktails, one room in which the audience is invited to draw a self-portrait, another full of working typewriters, a few more with silent film projections running on a loop. Somewhere in the building, a cellist and double-bassist play the gently cycling ‘Interlude’ from Marling's latest record, Once I Was An Eagle. A bit later, legendary producer Ethan Johns plays a few songs in an old chapel.

What's even more astounding is the level of commitment to this whole facade. While waiting for a toilet to become vacant, I assertively push my way into a small, unmarked room. My inquisitiveness keeps getting the better of me — every time I see a closed door it's the only thing I can do not to go straight over there and try opening it. Inside, I find a lone maid, fluffing a pillow. “Have you seen Mr Rodean?” she asks. I'm a little taken aback. “Err. Ah, no. Sorry.”

Soon after, and without so much as an announcement, Laura Marling swiftly appears on a balcony with Eddie Berman. They perform just a single song — Springsteen's ‘Dancing In The Dark.’ It's remarkable how quickly the commotion disintegrates to silence. An actor appears on the balcony and picks petals from a flower, sprinkling them on the assembled audience below. Maybe you're reading this on your lunch-break, and you're thinking ‘Christ, that's a bit heavy-handed’ — at least I know I would. But on the night, everybody seems so committed to this masquerade that it hardly seems to matter.

Eventually, we're led downstairs, outside, and into an adjacent building, where musicians continue to play the ‘Interlude’ theme we've heard drifting through the building all night. Before long, Marling joins them, and suddenly we find ourselves in the all-to-familiar format of a gig as we know it.


But there's still one striking thing: at no point do I find myself watching the performers through the dim glow of somebody's damn phone screen. They're still on the door where we left them, and it's fantastic. There's no record of these performances at all. Aside from the pictures taken by the organisers, it's near impossible to tell what the whole event even looked like.

It's something that's been bought to attention quite recently. Back in May, Alt-J trail-ran an app that encouraged gig-goers to do away with their mobiles by live-streaming the gig, and making a full recording available for download as soon as it was over. A month earlier, Yeah Yeah Yeahs had posted notices on the door at their gigs that simply read: “Please do not watch the show through a screen on your smart device/camera. Put that shit away as a courtesy to the person behind you and to Nick, Karen and Brian.”

And that makes perfect sense. With the amount of effort that's gone into this evening, the amount of weird and wonderful things happening, it ran the risk of becoming overrun with knee-jerk internet commentators and amateur photographers. If we all had phones, we might have simply pixelated it all and saved it for later viewing, instead of really appreciating it while it was there. The absence of any technology tore that wall down. Rather naturally, we wanted to tap away in a room full of typewriters, we wanted to explore behind closed doors, and we wanted to absorb fully — if only for a while — rather than immortalise on our mobiles and on YouTube indefinitely. It really was, to borrow some oft-heard sales terminology, an ‘immersive experience.’ And, as Ian Brown once pointed out, that's worth a lot more than “a memory of something [we've] never lived.”