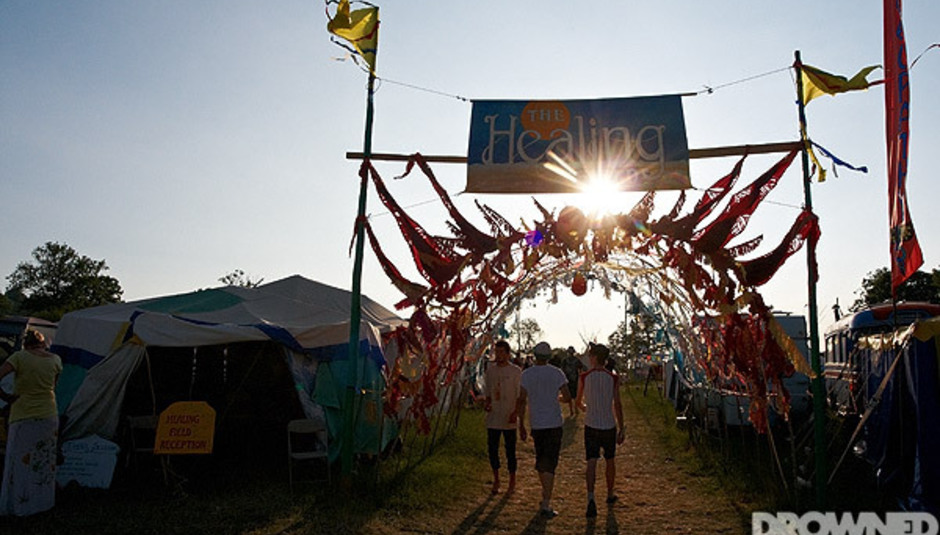 Later this week, DiS will be packing waterproofs and wellies sunglasses once more and heading along the M5 to Somerset. After 2012's fallow year, the daddy of them all Glastonbury Festival returns with a mouthwatering line-up packed with big name exclusives. As if finally persuading Mick Jagger, Keith Richards et al to play the event wasn't enough, they've also obtained UK festival exclusives from the likes of Portishead, Vampire Weekend, Smashing Pumpkins and Tom Tom Club. Not to mention the as-yet unannounced special guests that have sparked the rumour mill into overdrive.

Set to open its doors on Wednesday 26th June through to the early hours of Monday 1st July, it promises to be one of this summer's undisputed highlights come rain or shine. While some have accused Michael Eavis of playing it safe as far as the other two headliners are concerned; not that we are complaining about Arctic Monkeys being selected to close Friday's Pyramid Stage other than the fact they clash with three of the festival's most anticipated sets (Chic, The Horrors and Portishead). There is a school of thought suggesting that Eavis may have blown his budget on The Rolling Stones booking? However, love them or loathe them, Mumford & Sons have been one of the UK's most successful musical exports in recent years, and it's fair to say there'll be no shortage of love cast in their direction come Sunday evening.

This Glastonbury playlist is also available on RDIO

Of course, Glastonbury has so much more to offer than just music. The legendary Shangri-La area acts as the festival's own secret village. Constructed amidst a path of tunnels and alleyways, this year's theme is dubbed The Afterlife. Described as "A Blade Runner style pleasure city dedicated to non-stop 24 hour fun...", it's become one of Glastonbury's main attractions in recent years, particularly for those considering losing their marbles as it were. If that sounds a little too dark and dangerous for your liking, head over to The Common and seek out the Bearded Kitten's music and paint fest. And then head to the South East corner of the site and check out Arcadia, a dazzling audio-visual spectacle of lights, lasers and DJs complete with a 30 feet high stage in the form of a giant spider. Finally, no Glastonbury is complete without a wander around The Park. In previous years the home of surprise secret sets by Pulp and Radiohead, it's another of the festival's treasure troves where the likes of The Rabbit Hole - an underground cocktail bar - and Esmeralda's Emporium Of Vanity provide a plethora of alternative means to entertainment other than standing in a field watching bands.

Nevertheless, the main focus is undoubtedly on the music, and with nearly 500 acts playing over the course of the weekend, rightly so. Having intently studied this year's line-up, here's twelve artists Drowned In Sound are most looking forward to seeing.

With fifty years in the business, The Rolling Stones need no introduction. Three of the band's original members - Mick Jagger, Keith Richards and Charlie Watts - are still going strong at the ages of 69, 69 and 72 respectively. And while footage of their show at London's 02 Arena last December bordered on the pedestrian at times, expect a hit-packed two hours featuring many of rock and roll's greatest compositions.

Enigmatic yet so utterly beguiling at their best, Glastonbury represents Portishead's only UK festival appearance of the summer and for that reason alone, is not to be missed.

Revitalised since 2009's comeback, last year's This Is PiL long player suggested they're anything but a spent force creatively too. Expect antagonism, confrontation and fifty epic minutes of (mostly) groundbreaking genius.

Another band on the comeback trail; albeit in a far less understated manner; are Nottingham's Six By Seven. New album Love And Peace And Sympathy, their first in six years, is due to be released next month. With a set expected to feature a mix of both old and new material, don't miss this rare opportunity to catch one of the previous decade's most unique guitar bands in all their glory.

Aussie duo Jagwar Ma are one of the hottest properties doing the rounds at the minute. In demand both as musicians and from a production angle, debut album Howlin' justifies the attention. What's more, they're playing twice so there's no excuse for missing them!

Birmingham's Swim Deep stand out like a sore thumb as by far the most polished and accomplished of their native city's current crop. With debut long player Where The Heaven Are We? set to drop in August and a sound that owes as much to the post-rave comedown of the early 90s as anything else, they're a welcome breath of fresh air. Find out why in Friday's midday sun.

Named after a well-documented marriage ceremony in an Australian soap opera they may be, but any references to Kylie Minogue and Jason Donovan definitely end there. Coming on like a three-way punch up between Pavement, Beat Happening and Mission Of Burma, Scott And Charlene's Wedding provide the perfect Saturday morning wake up call for those still hung over from the previous night's excesses.

As one of the most inventive outfits to emerge from the new wave scene in 1980, Department S left a very short legacy spanning just three singles. Sadly, singer Vaughn Toulouse passed away over twenty years ago. However, the other original members of the band reformed in 2007 with keyboard player Eddie Roxy taking on vocal duties. For those too young to catch them first time, this should be an unmissable experience.

Having released one of 2012's finest debuts with the excellent All Our Favourite Stories, the Nottingham quintet have been busy writing material for the follow-up. Expect to hear a taste of what's to come alongside a few familiar favourites here.

Bobby Gillespie and Primal Scream are on fire and on form, as his recent interview with DiS in April suggested. New album More Light is arguably their finest body of work since 2000's XTRMNTR, while their live shows are never normally anything short of explosive. A potent combination, all things considered.

Songwriter, musician, DJ and producer Ulrich Schnauss isn't so much a jack of all trades, but more a master instead. Although largely revered by the shoegaze scene, its his ambient soundscapes and recent forays into swoonful techno on January's A Long Way To Fall that set him out from the crowd. Monday morning will never feel the same again.

Described by some as Sweden's answer to The Brian Jonestown Massacre. Korpilombolo collective Goat are a law unto themselves, fusing twisted psychedelia with krautrock inspired grooves and the occasional Sabbath riff to boot. 2012's World Music was one of last year's finest long players, while their live shows often give a whole new meaning to the words "improvised" and "experimental".

For live blogs, photo galleries and a full review from this year's Glastonbury Festival check out Drowned In Sound over the next week.