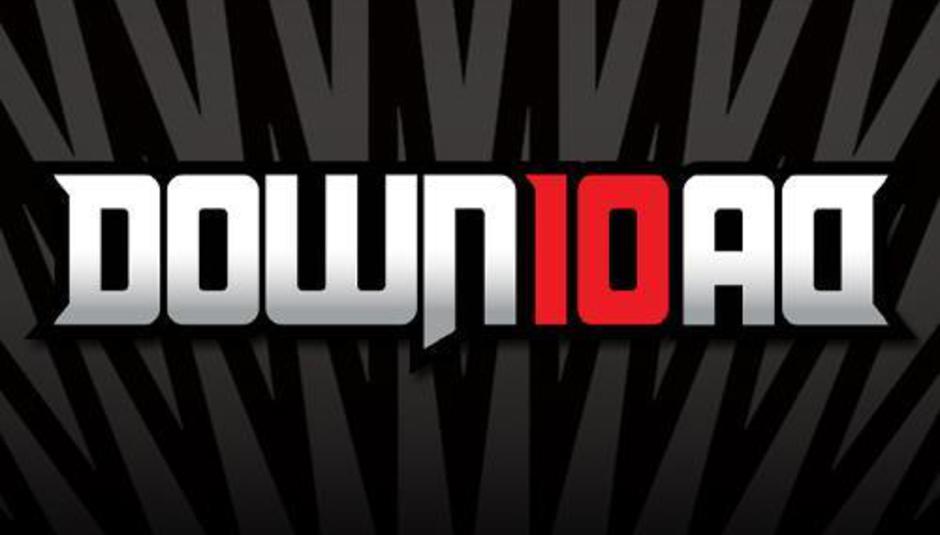 It's June, which can mean only one thing; festival season is well and truly upon us. One of those we've been looking forward to for months is Download, the UK's; if not Europe's; Premier heavy metal festival. Set in the rural surroundings of Donington Park on the Nottinghamshire, Derbyshire and Leicestershire border, it's traditionally been seen as the home of metal since the legendary Monsters Of Rock festival was launched there in 1980.

While Monsters Of Rock held its final event there in 1996 (returning briefly to Milton Keynes Bowl for a one-off event a decade later), the subsequent popularity of nu metal reignited the scene's flame and in the summer of 2003, Download was born. Originally a two-day event, it's fitting that a decade on from that inaugural weekend Download's first ever headliners Iron Maiden will make a welcome return this year.

While 2012's event will be remembered by many as Drownload thanks to the atrocious weather conditions culminating in the whole site becoming a giant mudpit by Friday evening, let's not forget some of the dazzling performances that lit up the festival too. From Black Sabbath's titanic headline set to Refused's show stopping return, Metallica reminding all those present why The Black Album is held with such reverence and veterans The Mission, Anti-Nowhere League and the Cockney Rejects all turning the clock back with stunning performances. This year's line-up also boasts a wealth of impressive talent from every segment of the rock spectrum. So without further ado, here are Drowned In Sound's ten "must see" acts at Download 2013. See you in the moshpit!

There's very little to say about Iron Maiden that hasn't been said before other than they've become the archetypal metal band that epitomizes the whole genre. Now in their thirty-eighth year of existence having initially formed at the back end of 1975. Iron Maiden have gone on to record fifteen albums with all but two attaining at least gold status in terms of worldwide sales. It's difficult to pick out a definitive song or era as they have such an incredible back catalogue to choose from, but we're going with this blistering statement of intent from 1983's Piece Of Mind.

Uncle Acid And The Deadbeats

Cambridge four-piece Uncle Acid & The Deadbeats mix psychedelia with doom-laden riffs like a Grateful Dead infused Black Sabbath. Having spent the past four years honing their sound while picking up a burgeoning fanbase along the way, it was this year's third long player Mind Control that brought them a much deserved wealth of nationwide attention. Their Saturday teatime slot is not for the fainthearted. Expect this to be loud. Very loud in fact...

Internationally renowned for 1986's huge number one hit single 'The Final Countdown', Swedish five-piece Europe are one of heavy rock's most commercially successful acts. Having initially split in 1992, the band got back together seven years later for what was originally only meant to be a one-off show, reforming as a serious concern in 2003. While the current line-up only features two original members; singer Joey Tempest and guitarist John Norum, they're sure to be one of this year's highlights, particularly as their scheduled show at 2012's event had to be cancelled as the band could not get on site due to traffic congestion.

Norwegian black metal outfit Kvelertak have been making a name for themselves since 2010's self-titled debut announced their arrival on the scene. Combining a range of influences from Mortiis and Metallica to The Misfits and The Meteors, they've emerged as one of the genre's most exciting bands of late. Recent long player Meir came out in March to a wave of critical acclaim, and even though they're going head-to-head with some of the biggest names in rock here, expect one of the busiest and most enthusiastic crowds of the weekend.

Supergroup-of-sorts Down could be one of this year's surprise packages. Formed in 1991 by Phil Anselmo - best known for his work with Pantera - and guitarist Pepper Keenan, also in Corrosion Of Conformity. Down have released three albums since their conception along with a string of singles and EPs. Their most recent offering, last year's Purple EP, is possibly their most raw and heavy collection of songs to date.

Coming from the glammier side of the genre, LA's Buckcherry have been causing a stir on both sides of the Atlantic since forming eighteen years ago. Seen by some as the natural heirs to Guns'n'Roses sleaze rock throne, Josh Todd and co. have put out half-a-dozen albums in that time, most notably 2001's Time Bomb which is still heralded as a classic artefact of the scene today. Playing in the lunchtime slot on Saturday, this is one alarm call nobody should want to miss.

Fellow LA combo Fidlar are relatively new kids on the block compared to most of the company here. Having formed four years ago out of sheer boredom, they've established themselves as one of the local punk scene's liveliest outfits. Coming on like a bratty fusion of The Ramones, Black Lips and early Beastie Boys respectively, their schtick - mostly consisting of songs about getting laid, wasted and stoned in no particular order - should come endorsed in a brown paper bag with the words P A R T Y emblazoned in bold black type across it. Here to kickstart Friday night and the weekend into action. You better believe it!

Legendary German six-piece Rammstein might just be the most perfect way to end a festival ever. Mixing king sized riffs, gregorian chants, theatrical stage shows and countless pyrotechnics, they're undoubtedly one of the most unique collectives to emerge from metal or any other scene in recent years. Having released six albums in total, 2001's third long player Mutter heavily regarded as one of the greatest heavy metal records ever made, their headline set here could go down in history as one of Download's most explosive and controversial shows in the festival's ten-year history.

One band that should no introduction to DiS readers are Queens Of The Stone Age. Lauded in just about every music circle since 2000's second album Rated R launched their incredulous brand of rock and roll to a worldwide audience, their set here ranks as one of Download 2013's most eagerly anticipated shows. With new album Like Clockwork having landed last week to mainly positive reviews, expect Josh Homme and the gang to be in top form during their hour-long performance. And maybe even the odd guest appearance from one of the band's many collaborators too? Whatever happens, this is one set that definitely should not be missed.

With a sound heavily indebted to Bruce Springsteen and The Replacements, albeit at its most intense and hard rocking, New Jersey four-piece The Gaslight Anthem represent Download's more melodic, and occasionally introspective side. Most recent long player - last year's Handwritten - saw a return to the anthemic, heartfelt sound of breakthrough LP The '59 Sound. As a Sunday teatime break from the thunderous metal, or an appetiser for the evening's headliners, there's no one better that fits the bill.

DiS will have a full review and photo galleries from this year's Download next week.