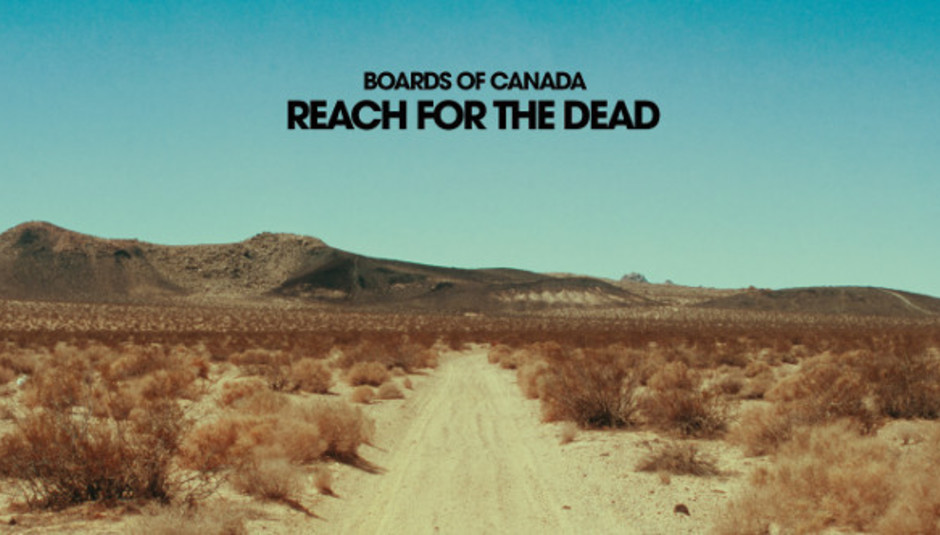 Hello. It's time for another DiS Does Singles and we've got some old friends to welcome back into the fold. That's right, Boards of Canada (a.k.a. the muso Daft Punk) have returned from the ether to treat us to a brand new song that you can listen to upon the Soundcloud.

We'll give 'Reach For The Dead' a celebratory once over and tap into the Scottish duo's school of cosmic singularity by charting the six degrees of separation between its original and reversed incarnations. Find out how The Watchmen, Coca-Cola and Noel Gallagher link them both together.

Plus, Hookworms, Splashh and Andrew Cedarmark have some songs we couldn't bear to leave out. It's a feast for your eyes and ears. Go on, get cracking with it.

Boards of Canada - Reach For The Dead (Warp) BoC are back and it's as though they never went away. As with My Bloody Valentine's return from the musical wilderness, 'Reach For The Dead' is no grand departure from the formula Michael Sandison and Marcus Eoin built a rapturous following off. Since no one has figured out how to successfully ape them in the years they've been gone, it's only fair enough that they show us all how it's done once more.

In truth, 'Reach For The Dead' is a tease to rival both Andy Murray's quest for a Wimbledon title and the finale of Lost combined. It caresses your senses with a mirage of spectral synth that promises future euphoria but eeks out every drop of feverish expectation. First comes the kick drum, then a strictly rhythmic cascade of bleeps. They're both building to something... hopefully more drums. We're almost three minutes in and there's no proper drum pattern!

There was no need to panic, of course. For when 'Reach For The Dead' reveals its majestic charms, you'll breath out a squeal of relief. All those disparate threads weave together into an elegant quilt of dazed electronica. Trouble is, this moment in the sun only lasts 99 seconds and Tomorrow's Harvest is out on 10th June.

Anticipation. It's a fickle beast.

On Friday, Warp Records tweeted a reversed version of 'Reach For The Dead'. This got me thinking about Boards of Canada's classic tendency towards hidden messages and oblique reference points. So I decided to link the two tracks via the six degrees of separation theory, according to which everything can intertwined together. Even Noel Gallagher and the California State Assembly...

‘Reach For The Dead’ was Boards of Canada’s first dose of new material to be released in 2,552 days. Their Trans Canada Highway EP was unleashed into all good record stores aeons ago on 29 May 2006.

This was the same day that Gnarls Barkley deleted their psychotic hit single ‘Crazy’ from public existence after it spent nine weeks at Number 1 in the UK charts. Danger Mouse and Cee Lo Green wanted people to "remember the song fondly and not get sick of it." The decision had nothing to do with getting radio to move on and play their ‘other’ singles.

‘Crazy’s video was based on the Rorschach test, in which a patient’s psychological condition is analysed by asking them to interpret a series of inkblots.

3) Bob Dylan - The Times They Are a-Changin’ (Columbia)

Rorschach is one of the lead character’s Alan Moore’s iconic graphic novel, The Watchmen. Bob Dylan’s ‘The Times They Are a-Changin’’ was used to soundtrack its movie adaptation’s opening montage, during which the idealism of post-World War II America slowly disintegrates allowing Richard Nixon to win a previously unconstitutional third term as US President. The fiend.

Despite his early penchant for protest songs like ‘Blowin’ In The Wind’, Bob Dylan has frequently allowed his songs to be used in TV advertisements. One of the first instances of this came in 1994 when a cover of ‘The Times They Are a-Changin'’, performed by Richie Havens, was licensed for use by the auditing and accountancy firm Coopers & Lybrand.

Noel Gallagher had a passionate distaste for artists using their songs in TV advertisements. Speaking to the NME in 2005 he commented, “Jack White has just written a song for Coca-Cola. End of. He ceases to be in the club. And he looks like Zorro on doughnuts, I don't believe in adverts. He's meant to be the posterboy for the alternative way of thinking.” These qualms had subsided by 2011, when a cover of ‘Whatever’ was used by Coca-Cola for a Mexican TV advertising campaign.

The studio version of ‘Whatever’ ends in a smug round of applause, presumably to congratulate Liam Gallagher on his innovative rhyming of “choose” and “blues”.

Such success can largely be attributed to a Daily Mirror front page story titled ‘Ban This Sick Stunt’. This took objection to ‘Sorted’s cover art, which offered instructions on how to fold a speed wrap. To the uphold the moral integrity of the Top 40, the Mirror supported its story with quotes from a father whose son had recently died from an adverse ecstasy reaction and a reader poll with 2,112 responses calling to ban the song.

One song that has been banned from many guitar stores is Led Zeppelin’s ‘Stairway To Heaven’. This is because the obnoxious staff in these shops found their endless reservoirs of patience tested by customers playing the eight minute epic’s opening riff over and over again. Hence the classic Wayne’s World quote, “No stairway, denied.”

It’s not just high street shop owners who’ve been known to hate on ‘Stairway’. In 1982, a program on the Trinity Broadcasting Network accused Robert Plant of praising the devil by hiding messages like “here's to my sweet Satan” in the track. This sinful behaviour was alleged to have been achieved by backmasking, where vocals are recorded backwards onto a track that’s meant to be played forward, and sparked an investigation into the practice by the California State Assembly.

7) Boards of Canada - Reach For The Dead (Reversed) (Warp)

Boards of Canada have employed backmasking throughout their discography. Most notably on ‘Happy Cycling’ where they went completely meta and reversed an interview with ELO frontman Jeff Lynne on the practice of backmasking. Hence the commencement of a grand tradition that lead to a reserved edition of ‘Reach For The Dead’ being created.

Not content to rest on the plaudits that were thrust upon Pearl Mystic, Hookworms have crashed their debut album's own victory parade with 'Radio Tokyo'. A caterwauling rush of frenzied organ and echo-laden vocals, it's cacophonous proof the Leeds-based five piece are set to terrorise unsuspecting ears for years to come. If this came booming over the PA midway through a carnvial ghost train, I would be petrified that the gremlins were out to get me.

Splashh - All I Wanna Do (Luv Luv Luv)

I’ve always taken ‘psychedelic’ as a byword for boring, which is odd because Splashh seem like they’ve dabbled with LSD and avoided transforming into a band my dad might enjoy listening to. It’s as though they’ve listened to Cream, the Grateful Dead and Jefferson Airplane while thinking, ‘How do we make this good?’ As it turns out, the answer is to play your guitars fast and scrappy.

In Photos: The Beards @ The Leadmill,...