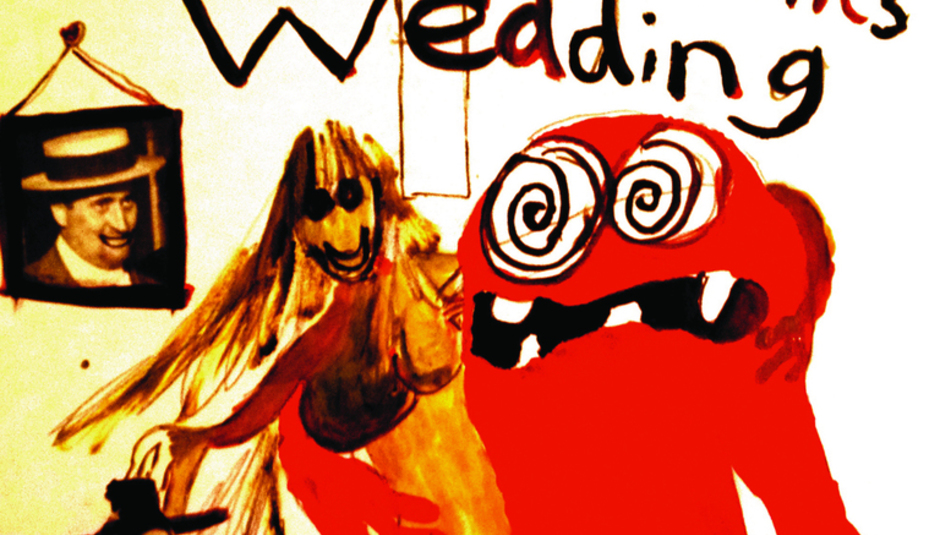 With Daft Punk’s disco-lounge-prog-sex-odyssey brazenly writhing all over The Interweb like an apoplectic anthill of Chromeo B-sides/frothing yacht rock upsurge, poe-faced slackers and fiery-eyed punks have barely had a look in of late. We still love those Gallic robots though, OK? And Georgio Moroder is a marvel.

But guitar-pop is in fine fettle too, with albums and reissues from Parquet Courts, Bleached, No Joy, Merchandise, Milk Music, Vision Fortune, Mikal Cronin, The Thermals, White Fence, The Pastels, Half Japanese; the beat goes on and on and so does the list..

The rough-hewn jewel in the crown has to be Scott & Charlene's Wedding's 'Two Weeks' EP (out now on Critical Heights) which you can listen to – in its wondrous four-track entirety – here.

The EP's romantically troubled title track explores the pitfalls and pleasures of enduring a long-distance relationship and excavates the minutiae of The Daily Grind with deadpan charm. Mel-born, NY dweller Craig Dermody's slack-jawed, sleeve-worn confessionals are delivered with that kind of lo-fi guitar jangle which taps into our longstanding love for Antipodean indie (from The Chills, The Clean and Toy Love to DZ Deathrays, Boomgates, Eddy Current, Twerps et al). Because although Australia may be a haven for electro-pop, scratch beneath the surface (just a little) and there's a lot more going on.

Sydney's R.I.P Society Records has put out releases by the likes of Boomgates, Constant Mongre and Royal Headache and Melbourne's Chapter Music has notched up some of our absolute favourites; Dick Diver, Twerps Beaches and The Stevens.

There's also Aarght! Records for high voltage, nimble-fingered punk-rock riffing - Total Control, Eddy Current Suppression Ring and UV Race - and check out snot-nosed Sydney punks Housewives who released their debut 7” 'Lick The Pip' at the weekend. We're saving our £££ to go Down Under.

Craig Dermody may have upped sticks and moved to New York but he has yet to cut the apron strings and his musical roots sound firmly tied to that wistful Southern Australian sound. With this in mind we asked him to give us his comparative snapshot of his two cities. Note Craig's repeated use of the word “bangin”...

Melbourne vs NY: Under the watchful gaze of Craig Dermody...

Melbourne: “The Tote - It's a tradition! Everybody who plays in Melbourne has played at The Tote; it's a good size room, they give you heaps of beer and it's proper dirty. When this place was closed because of crappy liquor laws, 10,000 people marched on parliament to change the law. True.”

NY: “285 Kent - It has crazy sound and I've seen the power black out mid-set there but the place has a bangin' party vibe. It's dirty as, and it's a DIY space so I'm sure it'll be shut down any day but for now it's the best place to go to shows.”

Melbourne: “Bedroom Suck (Brisbane) - I'm biased because they were the first label to give us a go but they put out some the best bands like Kitchen's Floor, Boomgates, Bitch Prefectand soon to be world conquering Peak Twins. Joe Alexander runs the label in between working at a fruit shop and and a bar at night and picking up every touring band from the airport and is the sweetest guy in rock 'n' roll.”

NY: “Woodsist (honourable mention-Underwater Peoples) Created by the fella from Woods and put amazing bands like The Babies, White Fence and Alex Bleeker along with a back catalogue of everyone bangin' including Kurt Vile and real Estate. They also put on a bangin' festival in Big Sir featuring all they're bands and Pierced Arrows. So much love.”

Melbourne: “Early Woman - proper rock 'n' roll with so much heart. Massive choruses referencing bands like Fleetwood Mac with amazing vocal lines that make me so proud of my mate Hannah Brooks.”

NY: “Spectre Folk are not so new but seem to be a secret even though they are a super band. They have amazing jam outs in a crazy horse fashion and are one of the best bands I've seen.”

Melbourne: “So many! I reckon Beaches! They take a million years to make a record but it sure was worth it. Just great girls jammin', what else can I say?”

NY: “Woods - They play pop songs from the heart and are super weird amazing musicians. Seeing Woods for the first time made me feel like I had found like I was looking for in NY. They make me so inspired and motivated to write songs.”

Best and worst thing for music re living in each city?

NY: “Best - Jonah Maurer - He plays in heaps of bangin' bands and has had a cameo in S&CW. He comes to every show and smokes weed and coughs till he cries. I love him. Worst - It's hard. Finding time, getting people to shows, distractions, work. That kind of boredom that creates the slacker vibe doesn't exist so much.”

Melbourne: “Best - Everyone who's in bands goes to every show, everyone feeds off each other. So many people go to shows! Worst - Everyone plays in bands so when you try and impress a girl with that, she don't care.”

Scott & Charlene's Wedding release new album 'Any Port in a Storm', July 22nd on Fire Records – for an initial taste of the honey check out new track 'Fakin' NYC' here:

1. Methodist Centre – 'Hugged By A Racist'

Slapping down a huge, meaty slab of homoerotic oi! punk on the counter to the despair of a blushing Aunt Edna, we bow at the feet of London “street punks” Methodist Centre. With their admission “we're so underground, we're fuckin buried mate,” this track is taken from their 7” 'Thumb in Bum and Mind In Neutral' which is out on Invisible Spies Records. Now go punch a racist.

Who needs words when you've got bass lines and the folly of youth? Taking the existential drag of being a loser and channelling it from head-to-toe and marrow-to-skin into a soaring, textured, slacker coo, Oxford's Poledo have clearly shunned the city's naval gazing lineage in favour of something a little more...exuberant.

A huge, lackadaisical, snare-you-like-it jangle-psych yawn from Calgary's Lab Coast, who have been touring these parts of late. Lab Coast's debut LP of 2011 – 'Pictures On The Wall' - is a beautifully fuzzy, melancholic trip and go here to hear more -

Warbling, perky sunshine-pop from Sacramento's English Singles – we heart you Slumberland – which sounds a bit like Another Sunny Day shooting the breeze with Elvis Costello and a tambourine. Maybe. No, it's not lo-fi surf-pop but...Californian Anglophile pop!

Peace out and take a Ride with Wavy Gravy whose chiming reverb-drenched shoegaze brings to mind those Oxford trailblazers. They're a band who surely hold that tie-dye wearing hippie activist in great esteem but we've seen nothing 'cept this trippy video

Grrrl fronted, sharp-elbowed, atonal no wave alterna-pop from Glasgow's North American War. The flip side to their debut 7” is called 'Geraniums On A Spit' and it's a pillowy art-pop beauty, with vocals that remind us a bit of Drugstore's Isabel Monteiro.

7. Traumahelikoptor – 'Down In The City'

Burger Records can do no wrong in our eyes. This sleazy garage-led rock 'n' roll spasm from Netherlands three-piece Traumahelikptor is even better than a kick in the shins.

“I will eat everything that you love” say South London's neighbours from hell, Bitches, who have been over in the US causing quite the Transatlantic shitstorm on their recent tour. This power-surge of confrontational two-person ASBO noise is a lean, mean, shark-toothed killing machine - throw this brick through your neighbour's window and reap the benefits.

We came across this song a few months back and we can't get enough. Slicing up caustic, acid-tongued wit alongside hooky guitars and subservient male backing vocals, Portland's Karen Harrington repeatedly opines; “she's no friend of mine” but we still really want to be her friend. The band's first release was put out by K Records and here's their Bandcamp:

This track from Brighton's embryonic Royal Limp drips with big time sensuality, is cloaked in narcotic doom and gloom and bolstered by percussive taps. Pull back the heavy purple velvet curtains for a barbiturate soaked trip. The band's debut 7” comes out this summer on Italian Beach Babes, there's an LP on the way (on an as-yet-undisclosed label) and they're supporting Bleached on Wednesday night at London's Corsica Studios.

This wound-down, slow-mo dreamscape is filtered through a Phil Spector lens but hooked onto the kind of melody that demonstrates a keen ear for songcraft. It's taken from the Brighton trio's 'Topshop' EP, which is out now on Faux Discx.

Marshmallow-fed, mathematically inclined indie-pop from London two-piece Cosines. The band met on the tube after a Stereo Totale show and this life-affirming piano stomp is off [their new 7” single](http://shop.fikarecordings.com/album/hey-sailor-boy which comes out today on Fika Recordings..

We've been preparing ourselves mentally and physically for our fourth ever Primavera this week...

After salivating over our Clash Finder all afternoon, we've created The Ultimate Line-Up, which is physically impossible to adhere to but we've always got bags of ambition. I'll be the one on the beach with the Bob Marley scarf and the Catalan donkey henna tattoo: avoid me at all costs...