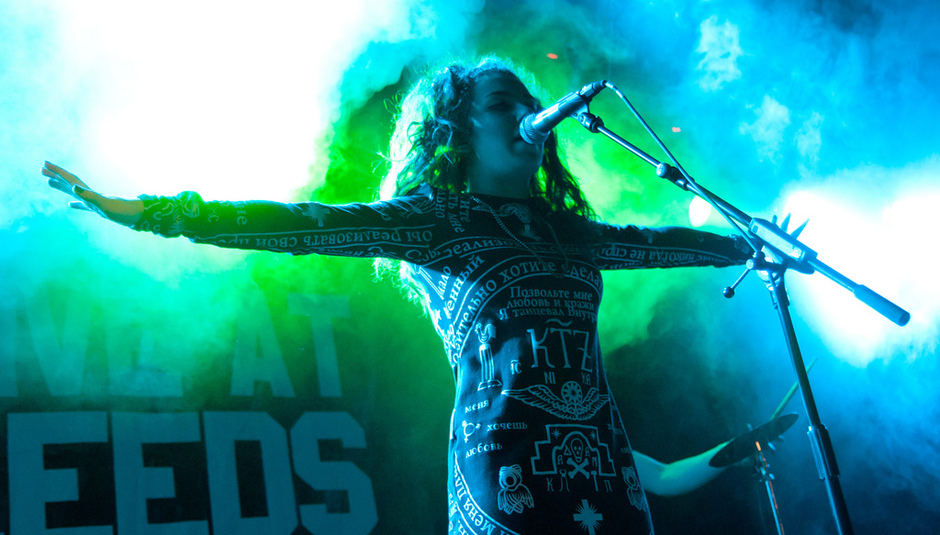 The Live at Leeds venue-hopping alldayer is nearly upon us again, taking place on the bank holiday weekend across a staggering 15 city centre venues over a 12 hour period means that this year's attendees have an overwhelming amount of choice. The line-up is noticeably stronger than previous years, which could be partly down to the Camden Crawl organisers’ decision to move their annual event from May to October, meaning that it no longer clashes with its northern opponent. After some careful consideration and over excitable use of a highlighter pen, here’s how my route is shaping up...

Here’s a playlist featuring many of the below, and plenty of other bands performing across the weekend:

The first pick of the day is the easiest of the bunch, you just need to make sure you are in town with your wrist band in good time as the early bird catches the wolf - Lone Wolf to be exact! His last proper Leeds gig was to a packed Brudenell Social Club back in January, where his lush, soaring earworms went down magnificently. His 30 minute set is sure to set the benchmark high for the rest of the day’s acts to follow.

Next, a short walk across the city centre will be required for local newcomers Menace Beach who were the first name to get circled on my timetable. They’ve been described as a supergroup, but to mention their many other projects here would be of discredit to the songwriting pairing of duel vocalists Ryan and Liza, who have crafted an exciting set of rock songs and pulled together a ferocious live band. Expect sub three minute blasts of fuzz-rock peppered with delicious hooks.

The next act will require another short walk to Holy Trinity Church for Bristol’s George Ezra to ease down the tempo a notch. I caught him opening for Adam Green on his UK tour a few weeks ago, and was pleasantly surprised by his deep, emotive and soulful voice that belies his youthful stage presence. It wouldn’t be absurd to suggest that his is a name that’ll be much higher up the bill come next May.

This venue shift might require a bit of motorised assistance in order to make it in time, but I will be heading to the University’s cavernous Stylus. This is definitely a good place to get settled for the mid-afternoon slots (try sneaking into the Old Bar for a decent ale between bands), as it plays host to a triple volley of promising local acts, beginning with one-man electro ensemble Swimming Lessons. Armed with more electronic gadgetry than Maplins, he has been enthralling crowds at recent shows supporting the likes of Tune-Yards and Hookworms, as he sets about constructing swirly clouds of reverb drenched vocals and propulsive beats which soundtrack an evolving back drop of alluring visuals.

They will be followed by Department M, the new project of Owen Brinley, former frontman of DiS favourites Grammatics. The songwriting remains as equally inventive and refreshing, but is a wholly different prospect musically as it sees Owen takes an experimental foray into a world of synth-driven melancholic pop. Their second single will be out this Summer via the consistently brilliant Too Pure Singles Club, who have already championed several other great Leeds this year.

Department M - 'I'll Fax You An Apology' - Live at Leeds Sessions 2013 from Moin Hussain on Vimeo.

Completing the hat-trick will be Post War Glamour Girls, one of the most exhilarating bands to emerge from Leeds in recent times both on record and live, and I would expect them to be previewing new material from their recently recorded and much-anticipated debut album. There are many facets to PWGG's sound, and and recent single 'Jazz Funerals' (below) does a grand job at representing a lot of these, seeing them dynamically shift between sultry and vulnerable to fierce and twisted, and right back again.

Next requires a shift in universities down the road to 'The Stage' at Leeds Met for London Grammar. There isn’t much material from the London three-piece around, but both ‘Hey Now’ and ‘Metal & Dust’ from their debut EP would have topped the charts had all the bloggers that poured over it backed up the adoration with a purchase. Both tracks demonstrate an easy-listening pattern of moulded melancholy, evocative of slowly building dark clouds threatening to burst under their own pressure as they advance overhead. Whether their full set will sustain the atmospheric force remains to be see, but if you're into the likes of Massive Attack or The XX it's worth taking a chance on them.

Yeah, yeah, another wolf-titled band, although by this point in the evening it'll probably sound like I'm encouraging people to watch 'Rolf Harris' with me anyway. Happily no change in venue is required (might be a good point to find some grub to help soak up all that booze) for the North London four-piece, who make sharp melodic rock numbers that have been heavily produced under the influence of a lot of 90s grunge rock.

Time for a dash back to the church for Dancing Years, who after completing filling every pocket of Cockpit 3’s limited space space with bodies and graceful sounds last year, have this time been upgraded to a venue more suited to their stirring majesty.

This could be the first of the big clashes as the BBC's Sound of '13 runner-up (AlunaGeorge) and fourth place (Laura Mvula) overlap. Both of the pop starlets have lived up to their billing by being fairly ubiquitous in their mainstream press and radio coverage so far. Laura Mvula is likely to deliver a soulful, rhythmic affair sprinkled with moments of the mystic beauty that adorn her album. Meanwhile, AlunaGeorge are likely to deliver a more high energy set including radio hits ‘Attracting Flies’ and ‘You Know You Like It’, which are bound to spark sing-alongs in the day’s biggest venue just across the road. I think Laura Mvula may edge the decision for me based on the fact that I’m not very keen on the O2 Academy as a venue, plus her close proximity to the band that will follow her in the room next door immediately afterwards...

Travelling from across the Pennines, Pins are one of the most exciting bands to have emerged recently from the currently burgeoning Manchester scene. They introduced themselves to the world early last year with a short runtape release featuring the track ‘Shoot You’ (below), which was instantly well received and attracted the attention of Bella Union, who later released their ‘LUVU4LYF’ EP. Pins' stylised rock inhabits the dark and eerie - all husky and brooding, but they are also capable of stamping on their pedals to summon a squall of spiky guitars and ferocious vocals.

Naturally, a lot of the biggest names on the bill clash to avoid venue overcrowding in the headline slots, and for me this throws up the toughest choice of the lot - whether to end my day with either The Walkmen or Still Corners. Stylus offers the opportunity to see the New York band make a very rare appearance in Leeds – I’ve checked recent setlists and they do still play 'The Rat', which is now approaching its 10th anniversary as an indie clubnight staple. It’s far from being all about their bratty earlier work though, with last year’s heartfelt album Heaven demonstrating that they now have more in common with the likes of Wilco and The Shins than they do their NYC brethren of Casablancas and co.

However, Still Corners will always be an attractive proposition, and their atmospheric live show be well suited to The Wardrobe’s dark and intimate surroundings. Their greatly acclaimed debut was full of perfectly executed sweet dream-pop, but the singles from of the forthcoming album Strange Pleasures (released the following week) suggests at a band intent on evolving their sound. With both ‘Berlin Lovers’ and ‘Fireflies’ indicating at blending 80s synth-pop into their floaty kaleidoscopic landscape, the signs are there that this album could be another gem. I think I’ll have to throw some alcohol at the situation on the day and hope that the indecisiveness clears.

In recent years the festival has continued to grow, and this year is no exception as it now takes place across the whole bank holiday weekend. The all-dayer is preceded on the Friday by an educational day of seminars, talks and networking known as the 'The Unconference', which will be followed by an accompany gig at The Wardrobe featuring Wet Nuns and Black Moth. Whereas Sunday sees The Vaccines play a large open air show on Millennium Square with support from TOY and Temples. The weekend finishes with a 5-a-side tournament at Goals featuring many local bands, venues, labels and promoters all sweating off the weekend’s hangovers on the pitch, plus there’ll be live music courtesy of ELFM.

Live at Leeds takes place 3-6 May 2013. Tickets for the Saturday are still available here.