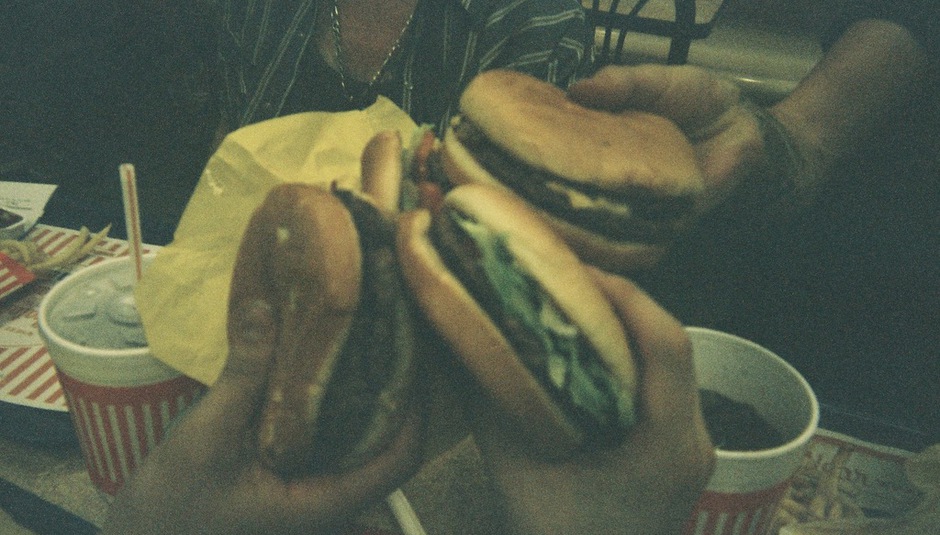 After playing nine shows at SXSW this year, Portlandian psych-poppers Wampire walked away with a lot of "woulda-shoulda-coulda's". Here's a few that might hopefully save some lives at upcoming city-based multi-venue festivals such as The Great Escape, Live At Leeds, Camden Crawl Dublin, etc... although most of this advice is for those acts lucky enough to play SXSW 2014...

I know this sounds really stupid but every show is extremely militant about not letting you bring in your own bottle and most venues don't have free water around. Just beer. Or some weird sugary thing that may or may not have booze in it. The last thing we wanted to do was complain about free beer left and right but we could also just feel our guts rotting after a couple hours.

This was my happy place at SXSW. Air conditioning and silence. Shout out to HUF for the free weed socks. 2) Get food from somewhere out of the small downtown radius you'll get stuck in.

If you're like us and filled your schedule with a bunch of shows, you should consider waking up early and getting food outside of downtown, and even hitting a grocery and picking up a bunch of snack foods and a cold lunch. The food in the SXSW radius is ridiculously over priced, yet the portions are way small (much smaller than a meal you should be eating on your big day). These food carts and restaurants are performing miracles with how much they are stretching out their food, and it sucks.

Burger cheers at Whataburger. Such a simple burger. So delicious. I want one right now. If you've ever been to SXSW you know this Wendy's. It stands literally in the middle of all the action. This picture didn't turn out well enough to show it but there's at least 50-100 kids hanging out eating cheeseburgers in the parking lot. My friend Emily wolfing down a giant cheesesteak. Definitely the best thing I ate at SXSW. Most of the food carts would give you ridiculously small portions but these things were huge and amazing. I know these are all no-brainers but we really goofed this year. If you're like us and have what I like to refer to as "mayonnaise skin" you should be applying liberally. We got pretty toasted the first day and it made everything worse; sleeping, the hang overs, being out in the sun the following days, it's not a lot of fun.

So a lot of people complain about SXSW, and there are plenty of legitimate reasons to do so. The sound guys are overworked, the bands too for that matter. Turn-around time is really short between sets, the venues are often outside and not properly set up to be loud enough for how big the space is, some shows are really poorly publicized. So it makes it hard sometimes to put on a good show, but if that's what you're there for than you have to keep your wits about you and stay positive. Which brings me to my next pointer...

5) Be nice to the staff, including door guys, stage managers, and yes even sound guys.

I found myself tempted to be mean to a lot of door guys for not letting me bring in a water bottle, or wanting to tell a sound guy off for having a bad attitude from the moment we get there (or for just being dumb), but I noticed that whenever we were super posi to the staff it helped a lot. Like A LOT. I have a theory that not being a cock can help take your band a lot further too. Surprising concept huh? I don't think a lot of people want to get behind really douchey band guys that think their shit don't stink.

6) Do some drugs, whatever your flavour.

You're at a pretty intense music festival. You gotta throw in an element of crazy to combat the crazy. (for legal reasons, DiS can't condone this)

7) Keep in mind that girls there are "Southern Belles".

We have girlfriends so this wasn't an issue, but I remember this from the first time I went to SXSW and saw this happen to a lot of people around me (which was always hilarious). Girls there are not trying to give it up on the first night. They'll hang out all night but have more class than that. I'm not saying don't try, just keep it in mind.

If you've been you know what I mean. West 6th is a cluster fuck and it's where all the baby-dubstepper-bullshit-fest kids go. East 6th is way more tame and that's where the majority of good shows are anyway. Either way you'll end up on both and that's all in good fun, just get the fuck off West 6th!

9) Don't be afraid to walk away from your mates.

I always get freaked out about losing track of one of my band mates so it's backwards that I of all people would recommend this but some of the most fun I had was wandering away when I could. We were all stuck with each other for so long, which is awesome and all because we became a total boys club, it's just very refreshing to hang out with some people outside of the bubble. Just be smart about it and show up to your shit on time and let your peoples know where you are and where you'll be.

The dudes from Swim Deep! Hanging with Jennifer from Bleached and Blaque Chris, a fixture in the LA show going scene. We all look like Muppets. 10) Forget everything I just said and do whatever the fuck you end up doing, it's whats going to happen anyway.

Do your own thing, find your own way. Just don't be a dick, and take care of yourself while being nice to the people around you. That's probably some of the best advice I could give you. Here's a photo from our set at the Austin Psych Fest. On the left is a man named RB Leslie that we met on the street. He was trying to sell us Vietnamese jaw harps, but instead of buying any we just had him play our set with us. It was pretty psychedelic.

Watching Black Lips play outside at Hotel Vegas. This was my favorite thing at SXSW. Cole from Black Lips crowd surfing and playing a guitar solo at the same time. Amaze. Here is a poker tournament that was going on at the house we stayed at. We had no idea until we got there that this house is an underground poker circuit. $100 buy in. There was a cocktail waitress and everything. It was weird but they were pretty nice so it made for a good time. There were tournaments two out of the four nights we were there. Getting a little R n' R in the Polyvinyl guys hotel room before our SPIN Magazine showcase. Pulling out of Austin. Although Austin is one of my favorite places in the world it felt like a million bucks to leave this time. All that alcohol/sunshine/not enough food/not enough water/playing nine times was starting to kill us. Later that night we had a hotel party with the Foxygen boys. You can see the toll the sunshine took on Cole! Yet he wore a beanie the entire time... Wampire's debut album, Curiosity, is out May 14th.