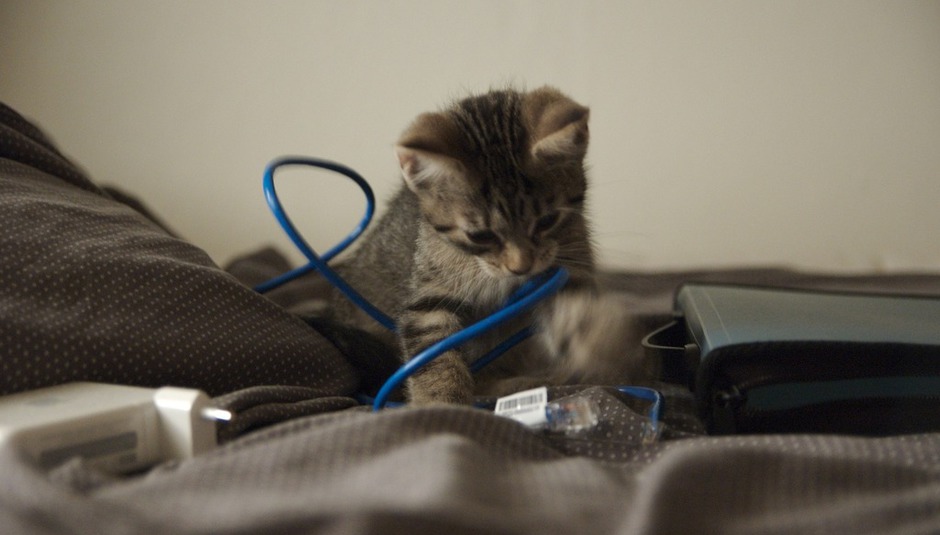 Modem Life Is Rubbish: Unplug To Save Your Love Of Music

Modem Life Is Rubbish: Unplug To Save Your Love Of Music

Music blogger Joe Sparrow, who edits ANewBandaDay has found the a solution to a problem you probably didn't even realise you had...

The last time I lived in a home with an internet connection was 12 months ago. When I tell people this, eyebrows involuntarily rise and the phrase, “but... how do you cope?” often pops out of their slack, incredulous jaws.

Truth is, it's pretty easy to live a life without the internet at home. And in regards to listening to music, it's - and I feel odd typing this - preferable. Maybe it's important to point out that I haven't voluntarily chosen to live without the internet as some sort of tiresome experiment with an eye on a magazine column, or something. It just happened that way: my girlfriend and I spent a long time on the road, living from place to place; and then when we settled again, I just never got re-connected.

As a consequence, I've begged, borrowed or stolen wi-fi for twelve months. During work hours, I get online via shared wi-fi. But the mornings and evenings are a barren, connection-less void. I can't get lost down Youtube rabbit-holes; I can't spool through zillions of tedious holiday snaps taken by vaguely-known 'friends'; I've had to start reading again. Urgh.

Mainly, what I missed was always-on, always-there, always-endless music. I say “was”, because during the first few months of Music Streaming Cold Turkey, I was wide-eyed and furious every time I had the sudden urge to listen to any particular song that popped into my head. Turns out that I was an addict used to the idea of having whatever I wanted, whenever I desired. And why not? The modern music consumption landscape is, on the whole, shaped to provide all the music, all the time.

It's hard to describe the cognitive confusion that arose when the need to listen to - oh, I dunno - Young MC's Bust A Move or the second disc of Goldie's Timeless (or whatever - music I love but do not physically own) bumped up against the cold reality of not being able to listen to it immediately.

Eventually, I worked through this frustration. And much like how the benefits of meditation arise from the act of releasing your mind from the onward rush of life, releasing yourself from instantly-available-everything actually frees you from the agony of unlimited choice. The result was that I dove back into my record collection - the music I actually 'owned', or simply had physical, offline access too. I discovered that I had, without realising, got into the habit of 'skimming' – hopping quickly from one song or artist to the next, and never delving deeper. Breadth of consumption had triumphed over depth.

Now, instead of flickering from one song to another, I was giving albums from which I'd previously cherry-picked, longer, repeated chances. I gave Nick Drake's Five Leaves Left another go – an album that I knew I 'liked', but never really listened to at all. And guess what? It's excellent (although not as good as Bryter Layter – but, hey, what is?), and I was as thrilled to 'discover' an album I'd owned for years as I was to discover someone new via the whirlwind of online music discovery.

My life improved in a small, but measurable way. The pace had slowed, but the - yikes! - richness was there in a way it wasn't before. This applied across the board for all forms of consumption: my reading became more focussed (I began reading books and magazines again), I began watching DVDs of classic movies rather than the admittedly brilliant Baby Monkey Riding Backwards on a Pig for the nth time on Youtube.

Even more oddly, I began buying CDs – CDs! – to rip onto my laptop. I've put in more listener-hours to BBC 6 Music than ever before.

Obviously, some things were missed: music discovery had to be scheduled during the daytime hours of connection – Hype Machine usage was more structured, and listening to tracks emailed from new bands was part of my work routine now. Scheduling is a bore.

I still want to be back online. I want an always-on connection, but I'd like to approach my use of it differently. I realised I had accidentally fostered a horrendous sense of entitlement: always-endless music/content/whatever, always available, on whatever whim. This entitlement and its resulting mindset isn't sustainable for anyone: for me and my mental calm; for the producers of music, whose output becomes just another thing to flit to and from; for the long-term health of any art that you consume at all, in fact. But the improvements in my life were from the act of unhooking from the stream; from being forced to reject the temptation of everything. Maybe it's just me, too weak to resist this temptation. I guess it might not just be me, though.

Imagine how much more music you might buy, or re-listen to, or invest emotion in, or pour time into. Imagine how that would change your feeling towards the music you think you love, and the music you didn't realise you loved. Unplug and find out. It won't hurt a bit.

This article originally featured on ANewBandaDay.