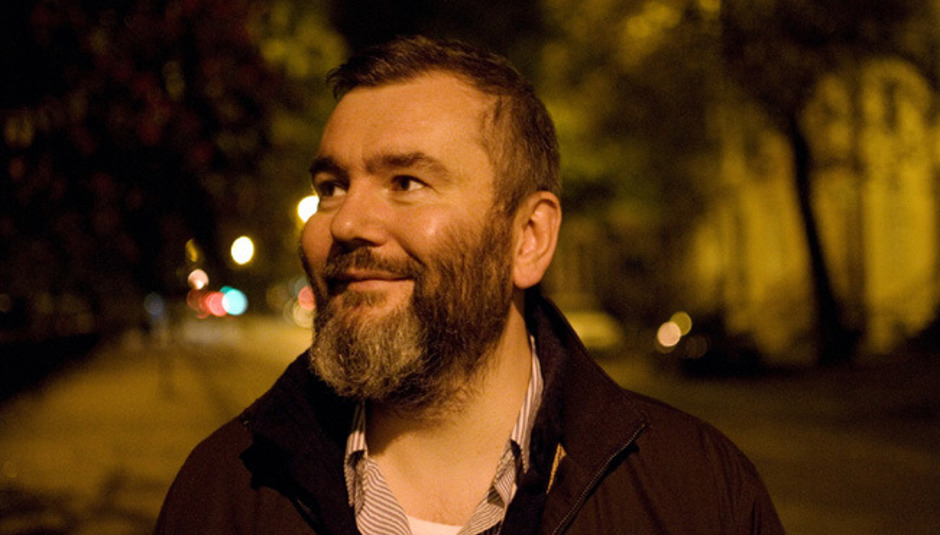 A smash hit: DiS delves inside the mind of Aidan Moffat...

A smash hit: DiS delves inside the mind of Aidan Moffat...

On the release of the fourth L. Pierre outing, The Island Come True, we opened our 8/10 review with a question: “Who exactly is Aidan John Moffat?”. At the time it felt pertinent, yet in hindsight it was always likely to come across rhetorical. In many ways, the review’s leading line was an inquest without an inquiry; a probe without a push; a fumble without a.... you see where we’re going here.

In our heart of hearts, we knew there was no answer. Remember, we’re talking about someone with the ability to swing effortlessly between verb-spouting poet, boorish musician, Twitter-glued deviant and, Christ, even relationship-fixing agony uncle. On any given day the man who made his name as the frontman for Arab Strap, can be anyone or anything he likes.

But here at Drowned in Sound we’re a persistent bunch. And some of us also grew up in awe of the probing – if slightly irreverent- interview style of 80s pop rag Smash Hits. So, in an attempt to finally nail an answer to our unrequited question, we tracked down Aidan and put a few personal posers his way, Smash Hits style...

Aidan, how would you describe yourself in three words?

What have you got in your pockets?

I'm presently wearing pyjama trousers, so all I've got is a torch to see where I'm going because I'm not allowed to turn the lights on in the bedroom after midnight.

As a play on one of our favourite ‘Strap albums, would you rather have a hug or a pint on a Monday?

A hug, probably from my son at three in the morning after I've had to take him back to his own bed.

Which pop star did you used to pretend to be in front of the mirror as a teenager?

Leroy from Fame. I'd lay the couch cushions on the floor in front of the telly and do somersaults and stuff. I wanted to be a dancer but it didn't quite work out.

Who do you think the most annoying person in music is?

I presently find Olly Murs' success irritating – he's the embodiment of desperate, talent-show mediocrity – but he is but a tiny tear in a vast, sad sea.

Money, i.e. don't spend it all on drugs, booze, comics and toys because no-one's buying records in the future.

If you could change places with anyone in the world, who would you like to be?

Olly Murs - I envy his mass appeal and common touch.

What is the most embarrassing lyric you have ever written?

I don't really get embarrassed, but there's a secret Arab Strap song called 'Don't Cry, It's Only A Penis' which will never be heard. I hope.

If you were called up to fight in a war, would you (a) shave your head and join up, (c) get the next flight out of the UK, or (d) be a conscientious objector?

If we're talking early 1940s then I'd be off already, but these days I'd entertain the troops. I'm too old to fight now anyway!

Which of these activities are you most likely to be found doing: (a) making a Jamie Oliver 15 minute meal, (b) tweeting about what colour of socks you’re wearing, (c) doing the ironing, (d) putting up shelves?

Definitely tweeting, but certainly not about socks. Rhymes with it, though.

Of all the musicians you’ve worked with who would you want to have on your side in a bar room brawl?

And which one would be useless in that brawl?

Me, definitely. I'd be the one hiding under the table pretending to have lost something. Dignity, I expect.

What’s your favourite record of all time?

Santo & Johnny's 'Sleepwalk' is the most beautiful piece of music in history, and it means many different things from day to day.

Who would you rather duet with: (a) Rhianna (b) Gaga (c) That girl who used to be in Pussy Cat dolls (d) Ke$ha?

Ke$ha! She'd probably be the most fun, too much baggage with the first two and Nicole Scherzinwhatever's fucking horrible.

If you were an animal what animal would you be?

I'd be a cat so I could sit about licking my cat parts, doing fuck all until I demanded some affection from the gullible tit that feeds me.

If you weren’t a pop star what would you be doing?

If I wasn't a POP STAR?! Flattery's always welcome, cheers. If you mean if I wasn't a 'little known indie moanist', then I'd probably still be at my mum's and on the dole. Qualifications and me didn't mix well, and I'm fundamentally lazy.

How many instruments can you play?

I can only play the drums with any degree of prowess, and even then I'm woefully out of practice. Anything else is just me dicking about.

What is the best thing about being Aidan Moffat?

Having a massive penis.

What's the worst thing about being Aidan Moffat?

Being a terrible liar. (Boom tiss!)

If you could have a telephone conversation with David Cameron, what would you say to him?

"David, I'd just like to start by saying I have an enormous amount of respect for you and the tough decisions you have to make every… AYE RIGHT CUNT FUCKING DIE NOBODY WANTS YOU HA HA."

What’s the best chat up line you’ve ever been on the receiving end of?

"None of the rest of the band want to shag me."

What are you most scared of?

In ten years time what are you most likely to be doing?

And with that, he’s gone. Away to do whatever it is someone like Aidan Moffat does. So what did we learn? Well, this is a man who doesn’t take himself too seriously; a man who loves his kid more than a pint; a man who’s probably never going to get an invite to an open house at number 10.

But did we get to the heart of who Aidan Moffat really is? Were any of these ripostes a key to unlocking what’s inside his soul. Unlikely. In fact, amongst all cussing and celebrity chitter chatter, we’re probably further away from pinning down an answer than ever before.

With questions like these, it’s no wonder Smash Hits went to the dogs.

"I wouldn't mind doing a record with ...