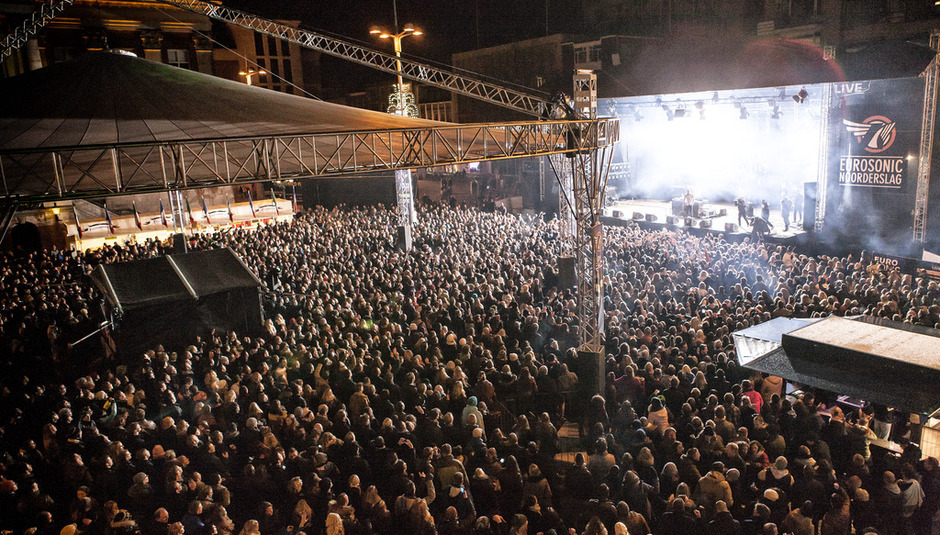 Once a year the European music industry decamps to the pretty Dutch town of Groningen to load their expense accounts with beer and fancy dinners, attend increasingly panicky conference panels about illegal downloads, have endless meetings and, eventually, go and see which ever band has the most effective PR and claim they're checking out the 'buzz'. Although in this case 'see' actually means stand at the back of the room talking to someone else.

Fortunately the annual Eurosonic Noorderslag festival isn't JUST a label love in, and if you can manage to avoid anyone moaning they can't find decent drugs and always asking for the receipt you'll find one of the best new music discovery opportunities in the world. Like Texas's SXSW, the event attracts the brightest hopes from across the continent, covering everything from Dutch surf rock to ambient Scandinavian experimentalism via British indie kids. What makes it work is a local population, mostly students, who are utterly open to new music- almost every show you see will be healthily attended by actual music fans with a refreshing desire to see bands they've never heard of. The culture of live music in this small city punches well above its weight, and it's a warren of legendary gig venues ("I saw Talking Heads open for the Ramones at Vera" says organiser Peter Smidt, greeting the press) and record stores. You can probably pin Jack White's entire career trajectory on the fact John Peel took a punt on a White Stripes album in a Groningen record shop. If you open your ears, dive in and embrace it there's a pretty brilliant time to be had.

SEVEN THINGS WE LEARNED AT EUROSONIC 2013

1>) Next year you will lose your shit to C2C at every festival you go to.

French 4-piece turntable champions C2C put on a show geared almost entirely at a festival audience. Musically they're of the same lineage as countrymen Daft Punk and JUSTICE with added scratching, all whop-whop basslines and chka-chka-chka samples. Live, they're consummate dancepop showmen. For what is essentially four blokes firing off samples in the right order this lot know how to create off-your-tits spectacle, swapping decks, baiting the audience and delivering an ace graphics and light show. Just when you think you've got the measure of them all four emerge from behind their decks, hit the front of the stage with mics and do a faultless run through of the Beastie's 'Intergalactic' complete with breakneck rhyming. Coming to a field near you this summer.

2) For other-worldly beauty call the Scandinavians.

More specifically call the Finns. Finland is the 'focus country' for this years event, and there's some wonderful stuff to be discovered. The intense, gloomy instrumentals of Siinai closed Friday night at Vera, looking and sounding like they've fallen through wormhole from an alternate 1992 where vocals are outlawed and all indie bands are forced to reinterpret the Aphex Twin with the sonic palette of the Cure. Hotly-tipped Rubik do a passable Guillemots-meets-Arcade Fire take on epic, percussive indie rock, but the really interesting stuff was happening an hour prior to their packed Saturday night Grande Theatre slot. Lau Nau, playing the theatre’s smaller upstairs room distills the essence of Finland's long, cold winters into ambient, warped art-folk, her constantly double-tracked voice merging with beds of odd percussion and strings to create something experimental and often genuinely stunning. “That was a song about the rider of the horses of the darkness” notes Laura Naukkarinen, “this is a song about the killer of the death of death”. Amazing.

3) Alunageorge aren't quite there yet.

One of the great white hopes for British pop, the duo of Aluna Francis and George Reid - here backed by a slick live band of session types- underwhelm at Simplon on Saturday, playing a set that when it hit its stride of thick, bassy pop R&B can be satisfying, but is just as often disappointingly tepid. There's good stuff here, and a cloud-pleasing take on the classic 'This Is How We Do It' breaks through the audience reserve, however it's clear that as sophisticated as they are on record the pair don't yet have the live chops to translate. Recent single ‘Your Drums, Your Love’ is still good fun though.

4) No-one has fixed the music industry yet

While the nights are for music the De Oosterport venue is given over to industry panels by day. They’re mostly spent stepping round the universal truth that the culture of illegal downloading and a public that have got used to getting what they want, when they want for free hasn’t gone away, and probably won’t anytime soon. It culminated on Friday afternoon in a presentation by Google in which Pink Floyd manager Peter Jenner and Tunecore’s Jeff Price had a stand up row over artists' rights. It was brilliant, and further proof that we’re probably all doomed.

DiS-approved Andy Burrows pushed his underappreciated 2012 record Company, while Dis favourites Villagers were showcasing their much-lauded and freshly launched {awayland} to a massive (in the case of the latter) and a rammed (the former) crowd. Burrows especially deserves credit for turning in an energetic and engaging performance in a museum foyer, while Conor O’Brein’s men held the beautiful Staddschouwburgh theatre rapt. It’s easy to see these two as the next big MOR crossover artists, even if both are doing something more interesting than that suggests- though in fairness so have Snow Patrol and Coldplay in the past. What they do have is a knack for translating quite complex moods into universal musical moments, in Burrows’ case with earworm melody, in O’Breins as one of the best lyricists working today.

The Dutch aren’t usually your go-to nation for new music, and 2Unlimited aside, there’s been a baffling lack of cross-over Netherlands artists in UK venues. It’s a shame, because as you imagine when you consider an entire country's musical output there’s plenty to discover. The final night here is given over to the Noorderslag bit of the festival - a showcase of Holland’s brightest hopes. Earlier in the weekend Groningen natives Dope D.O.D bust out their shamelessly old-school hip hop to a rapturous welcome, while Saturday night had the likes Moses and the First Born, essentially the Dutch Vaccines complete with that bands nagging choruses and 2 minute razor pop songs, and the wide-screen mainstage rock of Kensington.

7) You can see a lot here, but you can never see it all

Showcase events like this are always an exercise in what you end up missing- with clashing artists appearing in venues across the town you can dash around all you like, you’ll always miss something: We have it on good authority that Frightened Rabbit and Chvrches did the UK proud, Spanish mentallists Za had the show of the weekend and you couldn’t get near Palma Violets if you wanted to. But that’s the risk you take, and for every big name act that’s one-in-one-out there’s always the chance that the most beautiful sound of the year is in a basement just down the road, and stumbling over those gems is exactly what makes Eurosonic Noorderslag brilliant.