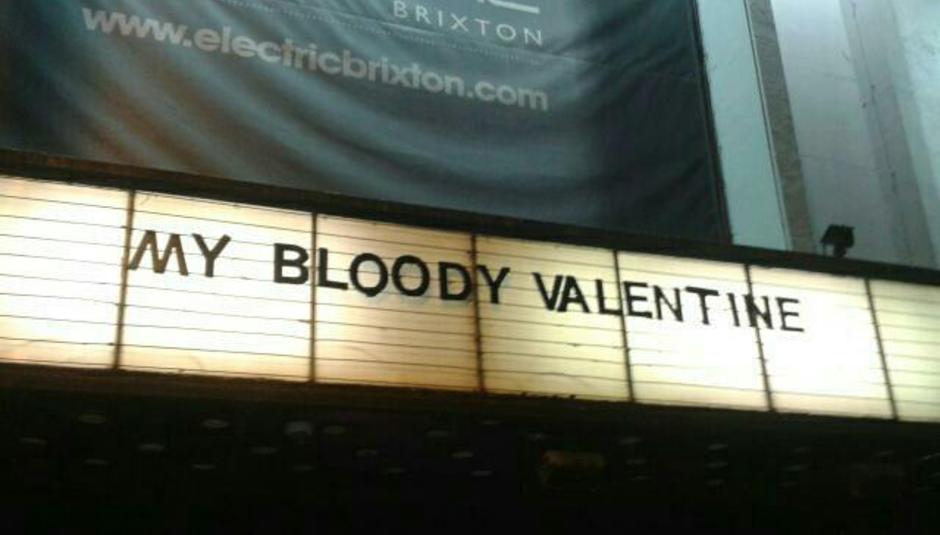 To kick off Dom Gourlay's regular series of Gourlay Files reports from the UK's best gigs, and some of the world's finest festivals, DiS sent Dom along to see My Bloody Valentine for the 17th time...

It's fair to say that no other record has influenced music in the same way as Loveless since landing at the tail end of 1991, so when Kevin Shields responds to a heckler asking when the new album's likely to appear with the words "Maybe in two or three days" - and whether he was joking or not - there's little wonder why each of the 1500 fortunate souls crammed into this venue, as well as every social networked music fan in the cyberworld immediately goes into meltdown. While the past twenty-one years worth of inactivity suggest the new My Bloody Valentine won't be with us by close of play this Wednesday, stranger things have happened. Such as the airing of a brand new song.

Yes, it takes literally seconds for the band to open tonight's set with their first brand new composition in two decades. Tentatively given what is assumed to be the working title of 'Rough Song', it's built around a lolloping groove - not that dissimilar to 'Soon' or 'To Here Knows When' via Primal Scream's XTRMNTR (of whom various members are here this evening along with Sonic Youth's Thurston Moore and J Mascis of Dinosaur Jr). Seeming to all intents and purposes to be an instrumental; it's only afterwards when viewing one of the many mobile phone recordings that appear on You Tube (before being subsequently removed within hours) it seems Bilinda Butcher takes lead vocals. Unfortunately we're none the wiser standing just halfway back, Butcher's vocal on this are rendered completely inaudible. Which brings us on to those well-documented "technical issues" attributed to the poor sound quality throughout tonight's show.

Aside from the vocals, Kevin Shields guitar sounded too high in the mix and some songs were completely indecipherable until the latter stages ('You Never Should' and 'Honey Power' being two that spring to mind). However, let's not forget that by the nature of what they set out to achieve, the sound at a My Bloody Valentine gig tends to be temperamental more often than not. Putting Shields' so-called reputation as a perfectionist to one side, the band's pre-Isn't Anything shows had a knack for being shambolic to say the least. Indeed my first live experience of the band some twenty-five years ago wouldn't go down as one of the most technically competent gigs I've ever attended, and while one imagines several terse exchanges being uttered between Shields and the sound engineers afterwards, surely the whole purpose of tonight's show was to iron out such issues now rather than wait until the tour commences for real next week.

After all, this evening's show was always billed as a "warm-up"; a rehearsal; an opportunity for their admittedly rabid fanbase to witness a historical event, the aforementioned debut of 'Rough Song'. Which makes some of the post-gig criticism, particularly on internet message boards nothing short of laughable. What did people seriously expect? Maybe in hindsight the venue (previously known as The Fridge; a cavernous old theatre, now used primarily as a night club. Although it does have a pedigree as a venue, as I saw The Wonderstuff here many moons ago) itself wasn't best suited to a band of their stature. Perhaps there was a communication breakdown between those on stage and those behind the mixing desk? Whatever. If anything, they've become victims of their own myth. For all the minor irritants; and they really are just that - minor - tonight's performance demonstrated on more than one occasion why My Bloody Valentine have been held in such high esteem for a quarter of a century. The swirling dalliance of 'To Here Knows When' lusciously executed, 'Thorn' and 'Feed Me With Your Kiss' both devastatingly brutal. A rare outing for 'Cigarette In Your Bed' off the You Made Me Realise EP drawing possibly the most enthusiastic response of the evening. While 'You Made Me Realise' itself and its infamous "holocaust" section were more subdued than normal - we clocked it at to be little over five minutes in total compared to the thirty-minutes plus of their initial reunion shows five years ago - it didn't detract from the most important aspect of tonight's endeavours; that My Bloody Valentine are back, and boy have we missed them.

My Top 10 My Bloody Valentine shows...

"Everybody’s had one person die; I ca...