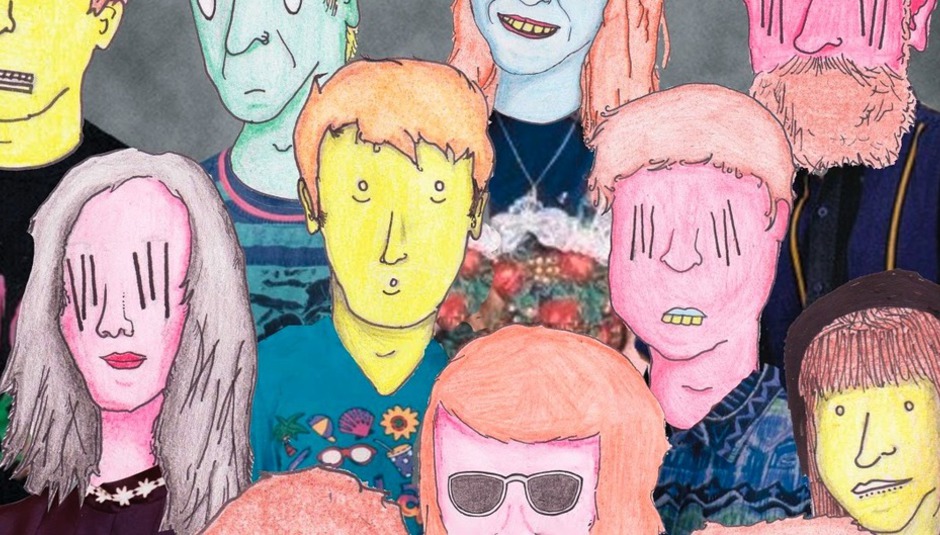 Here's the first of a new monthly column celebrating the sunny delights of DIY fuzz-pop, noise-pop, post-punk and straight down the line, knitwear endorsed indie-pop. We'll be taking the bittersweet, the shambling, the fey, the angular, the adrenalin fuelled, the rough around the edges, the anarcho, the slacker, the young at heart and the jangle all the way and waving them emphatically in your face, should you care to listen.

Bands, labels, festivals, events, radio shows, promoters – anyone who performs a public service to this most youthful sounding and self-motivated of guitar-led sounds - plucked from UK and US environs - will be hung out in the sun and laid out to dry. It’s a long and winding list but here are just some of the wonderful people who will no doubt pop up along the way; Upset The Rhythm , Sexbeat, Comfortable On A Tightrope, Tuff Enuff Records, Nightschool Records, Suplex Cassettes, Tye Die Tapes, Norman Records, Milk Records, Paradise Vendors inc, Art is hard, Faux Discx, Bratwell Recordings, Kristina Records, Slumberland, Underwater Peoples, Captured Tracks, Italian Beach Babes, Sound Savers, Gringo Records, Tough Love Records, Fortuna Pop! and many, many, many more.

Because, contrary to popular, commercially viable, chart obsessed belief, guitar music hasn't slipped off this mortal coil; it's very much alive and kicking, so let's put two fingers up to the doubters and unbelievers!

Our album of 2012 was Cold Pumas’ portentous post-punk debut Persistent Malaise (- hop over to their Bandcamp here). The yelping no wave of Roseanne Barrr’s Repulsion’ (Primative Records/Tuff Enuff) came in at a close second and third was Sauna Youth’s poetic garage punk tome Dreamlands (Gringo Records) but to set the wheels in motion we're kicking off proceedings with a mixtape of our top ten tracks of 2012 (in no particular order);

The 'sweater' – the sartorial subject of this powerpop juggernaut – is no stranger to the indie canon, Yo La Tengo seasoned it, Weezer undid it, Don Caballero put a belt round it and more recently, Trophy Wife demonised it. Self-styled teenage twee five-piece Cardiff based Joanna Gruesome - who just this month announced their signing to Fortuna Pop! - tear through three and a half minutes of bittersweet male-female vocal sparring, crashing drums and thrashing hi-hat, picking up melodic guitar lines as they go. More please.

Pure, unabashed, adrenalin fuelled, high velocity melodic noise-pop from Leeds laced with ice breaking, jaw dropping clouds of distortion. Frontwoman Heather unleashes lung blasting cries and it’s high-kicks and high-fives all the way. Taken from their 6-track EP of the same name – which came out on Tye Die Tapes in the spring – when they play live, they really get the indie kids dancing.

On hearing that a new Veronica Falls single was ripe for the picking, we started salivating about the second album. ‘Teenage’ is yet another moreish, honey drenched gem from the four-piece who exact the perfect transatlantic label union (Bella Union over here, Slumberland in the US) and who produced one of our favourite debuts of the past twenty years in 2011. We know we won’t be disappointed by round two...

Another saccharine sweet 'n' sour male-female duet from a band affiliated with the prolific Elephant 6 collective. They sound a little like a jangle-pop Apples in Stereo which is funny because their drummer so happens to be in said band. This time they’re swapping teenage kicks for the aristocracy on a song which immortalises French monarch Pippin the Younger in wonderfully melodic fashion.

A Cherry Carmex laced smacker from the shabby chic Newcastle based girl group who prove that there’s a lot more to the north east than Geordie Shore. Sweet and noisy in equal measure, this is taken from the 7” they released earlier on in the year on Milk Records; we’re just biding our time till the full length...

The floppy haired licks of Ride and the slacker vibes of Dinosaur Jr make for a neo-grunge whirlwind of the spacious, echoe-y kind. Wichita’s Cheatahs are a multi-continental four-piece hailing from the US, the UK, Germany and Canada, but currently residing in London. We’ll be revisiting these lost next year when they unleash their debut LP.

After setting our sights on this Belfast band last year, we welcomed their second LP with open arms. The side project of Girls Names’ drummer Neil Brogan, ‘Freak Waves’ teeters on the the kind jiving uptown groove that’s not heard enough in indie-pop. Jangle-jazz.

Guitar lines that wind around your person like a giant strawberry lace, beats from heaven and the most delicious baritone this side of the Atlantic: that’s London four-piece Omi Palone. ‘A Reason’ was released on the Marshall Teller Records compilation back in September and continues to delight us on a thrice weekly basis. They locked down some pretty gnarly wig-outs at The Lexington recently so we’re looking forward to hearing what’s next.

9. This Many Boyfriends – 'Tina Weymouth'

Any song about Tina Weymouth is a certified hit in our books but on its own merits, this low-end hit of orange flavoured pop could pass for a Calvin Johnson offcut. It’s pretty nice and at one point even boasts a kind of lyrical indie-pop pastiche “you can’t hide your love forever // come and feel The Lemonheads // searching for the Young Soul Rebel.” Oh yes.

Purveyors of elevator funk Level 42 released a song in 1986 called ‘Something About You’, but thankfully this sounds absolutely nothing like that. Supersonic slacker punk from the San Francisco three-piece who released one of the unsung album heroes of 2012 in ‘Killing Time. We can’t stand still.