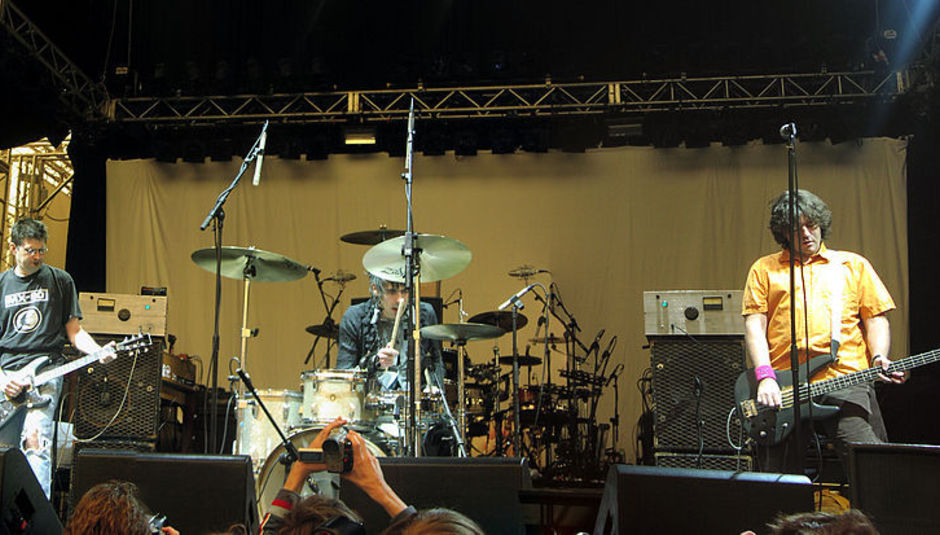 ATP Nightmare Before Christmas curated by Shellac: the DiS Review

ATP Nightmare Before Christmas curated by Shellac: the DiS Review

Two years later they were selecting the bands they listened to, and for the following decade the trio returned to play, again and again, and to listen to yet more bands. First they returned to that shithole at Camber Sands, then to the marginally more salubrious Minehead Butlins, on to ATP events in London and Birmingham, New York and New Jersey, Barcelona and Porto, and now, as curators once again, they’ve come back to ATP’s ‘spiritual home’: that shithole on England’s south coast. Shellac have played ATP so often that festival regulars find their reputation for rarely playing live merely confusing, and the incongruity of these three jaded Americans, hardened by three decades of hardcore, having become part of the furniture at a such a curious, quintessentially English locale is barely noted.

Shellac’s love of ATP has often lead them to turn in multiple performances over a single event, and so it was this time round, when they chose to be both the first and the last band to take the stage over the weekend. Just after 4pm on Friday evening, with hour-long queues for wristbands still wending outside the arena in freezing conditions, Steve Albini, Todd Trainer and Bob Weston launched into the harsh metronomic pulse of an elongated ‘The End of Radio’. The song could well be their finest achievement: Weston’s three bass chords repeating four times each with motorik precision, Trainer’s stuttering drum patterns and Albini’s guttural howls, hilarious satires on radio clichés and skewed and straining guitar solos evoke an ear-splitting intensity few can master. It’s a beautiful song, filled with nostalgia and hatred, violence and delight. Here Trainer’s drum work becomes the focus, his spluttering snare hits bouncing off Weston’s precision-blasted basswork like a pinball battered between the bumpers and kickers. Trainer has a wild and hypnotic stage presence which Shellac have always made good use of by sticking his kit front and centre. During a drum solo later in the set, Albini and Weston seek to focus attention more astringently upon him, retreating off the sides of the stage – the effect is only slightly ruined by the fact that the stage is pretty small, and the guitarist and bassist end up closer and clearer to those on the sides of the crowd than before.

This opening set is a lean affair, clocking in around three quarters of an hour – a taster for the closing show that will be big enough for everyone onsite to get into. There is time for a coruscating ‘Canada’, a buoyant ‘Steady As She Goes’ and the bloodletting singalong closing ‘Prayer To God’. In between the Steve and Bob say some genuinely heartfelt things, oh and introduce (at some length) new song ‘You Came In Me’ – a fully flexed work out for the three piece before the brief snatch of lyric: Steve: “You came in me!” Bob: “He came in you!” Steve: “What d’ya think I was gonna do? That’s why I’m fucking you.” Before 5pm on the opening day, the gauntlet has been less thrown down, more slapped in the face of every other band on the bill.

Shellac, of course, have been wise enough to pick a bill that can rise to the occasion. A couple of hours later, Oxbow’s Eugene Robinson is mesmerising as he strips down to bark and hiss his tortured vocals in front of a band augmented by eight of the Birmingham-based ‘orchestra’ convened for the Oxbow’s performance at Supersonic back in October. This slimmed version of the string section allows the band, whose song structures are always stretched to breaking across the face of the lyric, to take greater control of the music, and the show is the better for it.

Like Neurosis will the next day, Mono tread the line between delicate ethereal melody and plundering rock behemoth. Where Mono have a detached feminine grace, Neurosis are all pent up, masculine anger and, well, neurosis. Both turn in bruising performances. As too do Prinzhorn Dance School, though these are the careening jabs of a flyweight rather than the slow draining slugs of the superheavyweight. The set bounces along aback Suzi Horn’s circuitous basslines, as do the crowd as they close out the first evening.

The next day Buke and Gase turn in a pitch perfect performance, aided by a guest slot from Bob Weston. The duo of Arone Dyer and Aron Sanchez play some unconventional homemade plucked-string instruments and Sanchez seemingly even manages to turn in some one-man-band action with a foot-pedal operated bass drum. The sound is rigorously held claustrophobic strum, layering and occasionally splintering across multiple frequencies of the sonic register. Weston needs that notoriously precise time-keeping just to keep up, although the duo don’t really need him: abetted by Dyer’s tense, tremulous vocals they turn in a nerve-wracking and impressive ATP debut.

Upstairs Arcwelder plot their monolithic grooves over some nifty fretwork, the driving rhythms of their songs hurtling on with frenzied force. Then Wire, a true legend in the line up, fail to fully ignite. ‘Two People in a Room’ has the necessary urgency early on, but they miss the shamanistic presence of Bruce Gilbert and the relatively weak sound upstairs doesn’t do justice to the intricacies of songs like ‘Map Ref. 41°N 93°W’, while Colin Newman’s mature growl is occasionally rendered as an irritating yap. More upsettingly they clash with Melt Banana, who play the small stage with queues running round the corner – what little that can be made out though the doorway seems as electrifying as ever.

As she intimates when she takes the stage, Kim Deal could probably do anything and get away with it, such is the goodwill felt towards the Breeder-Pixie. She earns that goodwill once again, as much with the joy emanating from her presence as with an enthusiastic set in which she alternates between acoustic and electric guitar, in which she evens sings some of the guitar lines to her two biggest songs, ‘Cannonball’ and ‘Gigantic’, to her own rhythm playing. There are some new songs which have a definite promise, but will need to some fleshing out.

Conversely the next day Nina Nastasia demonstrates how a lone voice and acoustic guitar can give the fullest dimensions to a song. Her set is an hour of beguiling intensity, and this in spite of being interspersed with lengthy chat about “snot-suckers” and Twinkies, and a moment of complete forgetfulness where she has to stop halfway through ‘I’ve Been Out Walking’. Nastasia’s voice buries its power beneath a carapace of fragility, and is all the more stunning when she suddenly hits those highs of emotional ferocity. Her guitar weaves solid patterns round minor chords and her words evoke a life of blisters and longing. She spends an hour making a disparate room fall in love with her, and once she’s done, on come some backing musicians – cellist Rachel Grimes and pianist Alison Chesley (aka Helen Money) – and the effect is overwhelming. Chesley’s piano takes grip on the melodies and Grimes provides adorning underbelly as Nastasia’s songs take flight, for a glorious highlight of the weekend.

After that some brittle rock is something of a release, and Bear Claw provide just that. Like many of the bands performing over the weekend’s event, they sound a little like Shellac, but that’s a damn fine sound, and Bear Claw do it damn well. Alix’s variant on the sound treads the line between kraut and math rock, unfurling lengthy streams of guitar with some verve and no small amount of tambourine chucked in for good measure.

The final run of acts on the upstairs stage is as impressive as any are ever likely to be. First Mission of Burma are on sparkling form. They open with a blunt, bludgeoning ‘This Is Not a Photograph’, and don’t shy from their early classics. Okay, there’s no ‘That’s When I Reach For My Revolver’, but ‘Trem Two’ is utterly immersive, and closer ‘Academy Fight Song’ leaves them nowhere to go anyway. Equally impressive is the newer material spread across the set. The group never quite look like they’re in the same band - Roger Miller is reminiscent of a latter-day Neil Young, hair of an acid casualty and guitar work even less predictable, Clint Conley could be a college lecturer, punctual and dapperly turned out, meanwhile behind the kit Peter Prescott’s bald pate gives him a thuggish air, and Bob Weston isn’t even onstage - he works tape-manipulation from the sound-desk. Yet the pieces slot together like a machine.

Next up The Ex appear with the quadruple brass attack of Brass Unbound (Mats Gustafsson substituted on this occasion). Their appearance comes on the back of a three night residency at London’s Café Oto, booked to celebrate their 33 and a third anniversary, but they have the energy of a band just starting out. All those years tell in the skill with which Katherina Bornefeld’s jagged percussion links with Terrie Hessels and Andy Moor’s intercutting guitars and Arnold de Boer’s vocal interventions. The set is actually pretty similar to the one they played in London on the Thursday before ATP as just ‘The Ex’, but with Brass Unbound there is a fiery blast of freeform noise appended to each track, taking it somewhere altogether other.

All of a sudden there’s just one act left: Shellac. This time round they’re in for a full fat show with all the trimmings: Q and A session, physical stunts, and, best of all, it’s double the length of Friday’s offering. Once again, they remind everyone else why they’re top of the bill, before ending, as they began, with ‘The End of Radio’. This time round Albini most fervently catches the eye – his soloing is nothing short of virtuosic, his lyrical improvisations (including lengthy musings about what exactly is going on between “snaredrum and I” and the naming of the great DJs past – John Peel included – whom the song is really about) hilarious. Trainer prowls the stage battering sticks into the crowd off the skin of his drum; Weston, of course, keeps perfect time. As is traditional, Albini and Weston remove the drum kit with Trainer still banging his rhythm – at the end there is nothing left onstage, and we could expect nothing more.

In Photos: The Hives @ The Roundhouse...