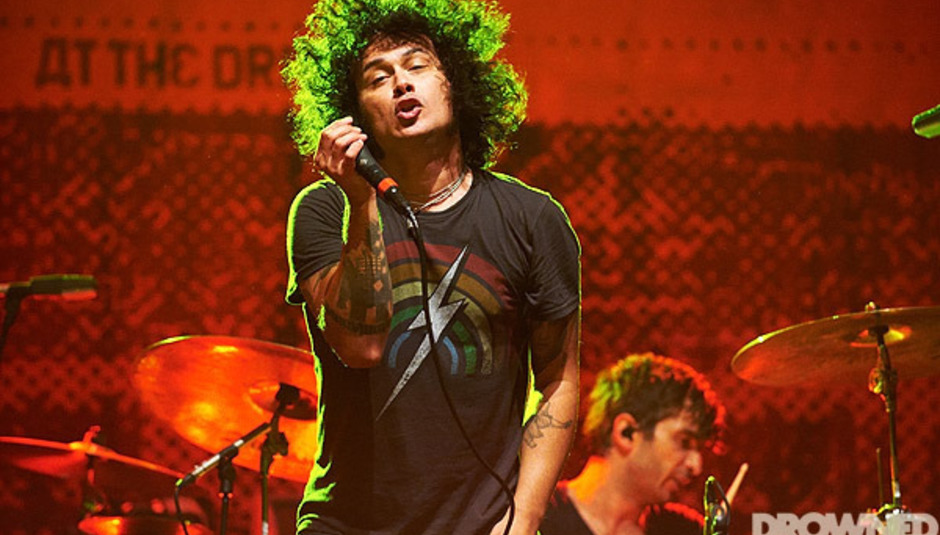 Jim Ward has screamed a lot, but said little, for the past hour or so. Yet as At the Drive-In stride back onto the Brixton Academy stage for an encore that will feature their signature song, the seemingly evergreen post-hardcore pile-driver ‘One Armed Scissor’, he approaches his microphone and addresses the sold-out audience.

“We consider this the last show of the Relationship of Command tour,” he says. A few lumps form in a few throats. “It’s taken us 12 years to get here, but…” He tails off. He says something about how much he loves these guys, these band mates, these brothers of his; these men who suffered through splintered affections since ATD-I’s dissolution in early 2001, only to rekindle friendships and announce a reformation in January 2012. These men who, it must be said, are in this for the money. That much has been clear since their first comeback show at Coachella. Few in this crowd give a fuck.

The “sold out” notice adorning this iconic London venue’s entrance could be read two ways. But to adopt a position of snobbery, holding dear outdated punk ideals over the pure joy of witnessing a loved band do what they used to only slightly less convincingly than over a decade ago, is to miss the point of ATD-I’s comeback specials.

These shows weren’t ever for you, granddad. Yes, you were there, you saw the band at Reading in 2000 (alongside approximately 500,000 others who claim to have been inside that tent), or before, even, touring In/Casino/Out around pub-sized venues. You bought the t-shirt and soaked it through, going giddy as Omar and Cedric snake-hipped their way through sets that combusted with a colour uncommon in hardcore. The ragged old thing now gets worn only when gardening or D.I.Y. calls. We get it. They were better before. They were 12 years younger before.

But get this. Cedric’s 37 years old. And he’s having a fucking party up there. He remembers being rather more mobile back when, when he could scale an amp at the first attempt and achieve greater altitude when leaping from it. Omar remembers what it was like to thrash violently and maintain control of his instrument of choice. Today, compromises need to be made to deliver a show that meets the demands of those who never saw the band before they separated. So there’s less movement up there. The fires have cooled somewhat. Cedric’s voice has developed – he’s a singer nowadays, less a shouter. The hair’s rather more manageable. The Later… clip is a riot, sure; but play that way for over an hour and people are going to leave. That next to nobody does until ‘One Armed Scissor’ brings the house lights up: well, that’s evidence enough that ATD-I have bowed out, assuming this is their very final gig, in no little style.

And proceedings begin as electrifyingly as they end: Relationship of Command’s ‘Arcarsenal’ and ‘Pattern Against User’ qualify as amongst the best opening braces of any album of the 00s, and here they’re served as songs one and two, sending the throng wild. Inevitably the atmosphere shifts down a notch of feverishness when the five-piece dip into their earlier material. ‘Lopsided’, from In/Casino/Out, is well-received by the vocal minority, but those turned onto the band by Relationship…’s legacy are reduced to tapping and clapping along, rather than bellowing back Cedric’s stream of head-spinning non-sequiturs.

‘Napoleon Solo’, the best-known cut from ATD-I’s 90s catalogue, receives the sing-along treatment; but a mid-set run of Casino’s ‘Chanbara’ and ‘Pickpocket’, beside three efforts from the Vaya EP – ‘Rascuache’, Metronome Arthritis’ and ‘198d’ – has some feet striding towards the bars rather than stamping out a beat. Such a reception is inevitable as ATD-I only connected with a wide(r) audience with Relationship…; but it’s fair to say that the sequence represents something of a sag in the momentum of the night’s entertainment, at least so far as audience participation goes. Extended jam sections test attentions, too; but when the band kicks back into the most brilliant life, the senses explode.

“Don’t be afraid to sing along,” says Cedric. Nearly 5,000 people do just that to ‘Cosmonaut’, which sounds heavier in 2012 than it did in 2000, the years imbuing it with greater weight at the expense of visual flair. Another Relationship… number, ‘Non-Zero Possibility’, is accompanied by a boiling kettle (surely a safety hazard amongst so many sockets and things?), Cedric sipping (presumably) tea between songs. As the set reaches its peak, with ‘One Armed Scissor’, it’s evident just how hard these musicians pushed themselves to deliver their final album. Its songs are so much bolder and brighter than those that came before, which tonight sound oddly staid and certainly stereotypical of so much other late-90s post-hardcore by comparison.

And then they’re gone. Twitter comes alive. It was brilliant. It was arse. Nobody thinks it was just okay. But that’s what At the Drive-In have been in 2012: just okay… decent… enjoyable, but never life-changing. A great band playing good songs to many a man, woman and then-child who never had the opportunity to see them before. Their comeback hasn’t been as successful as Pulp’s, but probably surpasses Pixies’ for thousand-miles-per-hour thrills. Their reputation hasn’t been tarnished. And they’ve all come away from the experience richer – not financially, although that surely helps; but as friends who finally got themselves in a position to play together again, to bring a chapter of their personal and professional lives to a very belated close.

Jim Ward may never scream these songs again. But on a Tuesday night in south London, almost 20 years after he co-founded this band, for just over an imperfect but welcomed hour, this station was so operational.