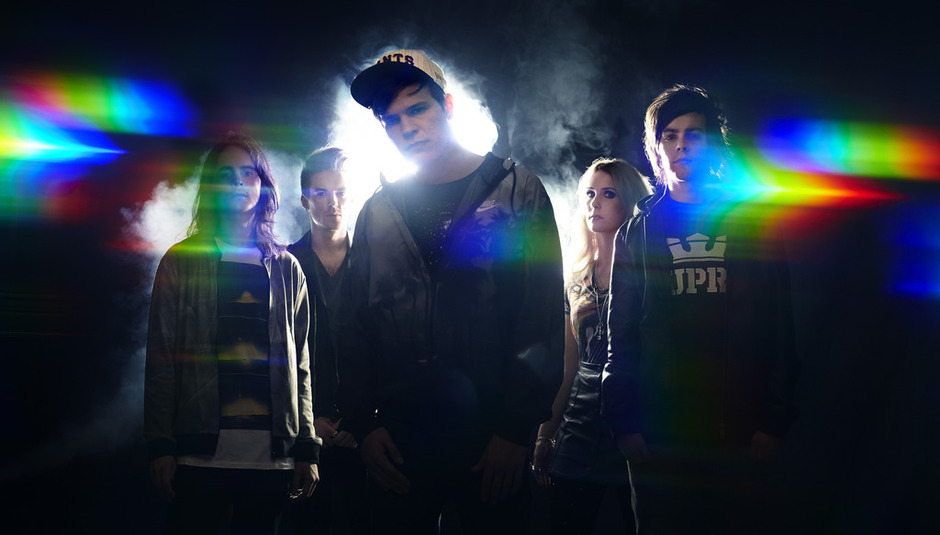 "Being apolitical is a political statement in itself": DiS meets Hadouken!

"Being apolitical is a political statement in itself": DiS meets Hadouken!

Now signed to Ministry of Sound and in the process of finishing record number three, it seems a touch unfair to continue attaching that (already jaded) tag to Hadouken!, though their sound continues to genre-blend in a way that's as reminiscent of Daft Punk or Beastie Boys as many of their contemporaries.

Frontman and lead yelper James Smith cuts a relaxed figure when I meet him, betraying just a hint of the wired, bristling mind present on the band's records. We chewed the cud about record number three, the rise of dubstep and the politics behind Hadouken!'s dance punk party.

Your third record is scheduled for next year – how far along with it are you?

"We've got our singles lined up – it's not completely finished but it's 90 percent there. We've pretty much got an album ready to roll."

I thought your second album showed you developing a more layered sound, bringing in influences from UK garage and similar genres – are you continuing to push in that direction with the new record?

"I think For The Masses, for us, was the album where we cemented who we were as a band and who we wanted to be. I think this album is building on that, moving forward but still retaining the essence of Hadouken! We're mindful of who we are, and we've been quite happy with the reactions to some of the songs we've played off [the new record] so far. They kind of seem to fit into that last album."

"They've influenced us from the word 'go'. My parents made me clear out some of my stuff from their loft and I was going through some old CDs...half the songs were me trying to be them when they'd just started, back in 2001. So I don't see them as our peers, I see them as a cut above us, even though we've toured with them and played next to them at festivals and stuff. They were producers that made me wanna make music, so that's always gonna be there. Since they've gone they're doing the Knife Party thing, which I think is still quite relevant. You're always going to have comparisons - that's inevitable – but if we had any quarter of the success they've had we'd be happy."

Who have you worked with on the new record?

"We've done a lot of work with Lodestar, and we've had a couple of sessions with Noisia who did the previous album. There are a few other people we've worked with – Bassline Smith, Blockhead and a guy called Ave who's a dubstep-style drum and bass producer. There's a whole bunch of people, and we were happy to work with anyone who was keen and had a sonic dexterity and sounded like they were at the forefront of the sound now really."

Speaking of dubstep, any influence on album three?

"I think there is a little bit, and that's going to be inevitable because that kind of sound has permeated all forms of dance music. But we also want to be mindful of not going too far down that road. 'Bad Signal' certainly is a dubstep beat, but we try to bring our own thing with the sample and the rap we're pinching. Everyone would hear that and say 'oh, that sounds dubstep', but there's a grime influence in the vocals and a soul influence in the chorus. But dubstep is the one everyone picks up as it's quite magnetic at the moment."

You're continuing to be musical magpies by the sound of it then, dabbling in lots of different genres and sounds…

"Yeah, we've done that our whole career and we will continue to do that. There have been a whole bunch of different sessions [for this record], and not much clarity in what the feel was in the studio, but we've had a lot of fun making it. We've literally been in the studio grafting for two years, and it's going to be a bit longer than that before it's finished…so it's been a long recording and right at this moment I'd be quite happy to see the back of it!"

You're renowned for your live shows – do you think about how your records translate to the stage?

"Yeah, we're mindful of whether it would work live, and I think actually the touring informs the writing of the records – we can tell what's gonna go down well, and how to structure a song so that it maximizes the impact of the drops and stuff. It's also about trying to still have a rock structure to it, so it's about having dance music within the rock format of the song. I think dance music can sometimes lack that in its songwriting – they've gone strictly for a DJ and it can drag a little bit. We try to keep your attention."

You've always had an observational element in your music, with a lot of lyrics considering youth culture in particular. There's been a lot going on in the last few years in terms of student protests, revolutions and riots – any of that in the new record?

"It's kind of loosely based around stories about the weekend, letting yourself go and things like that. I think mainly the lyrics people are going to hear are about losing yourself in the euphoria of the music, the rave reference of that. Coming together, being as one and having that rave, all-together mentality. Which is funny, because I think 'Bad Signal' and 'Parasite' don't have them whatsoever really – we've released the darker ones first because those tend to do more damage on the underground than the more mainstream ones."

So the more political ones get a better reception…?

"We don't want to have too much of a political message – I think being apolitical is a political statement in itself. There's so much shit going on in the world at the moment that you don't really need to ram it down people's throats in music. [Music] is a place where people can come to escape from all this shit – I think rave did that in the last recession in this country. It meant that people could drop a couple of Es and just lose themselves for the weekend because they've got shit going on in their lives elsewhere. It's probably the same as the hippies with Vietnam, stuff like that really."

So it's recession music?

"Yeah – this is the biggest one, isn't it? It's nice that people can find avenues and places to lose themselves a little bit more. I think there are a few bands among our peers doing a political message, and I do commend that; I think it's wicked they can talk about that. But for us, I think our fans want to come to the gig on Friday night and lose themselves, and that's what we give them."