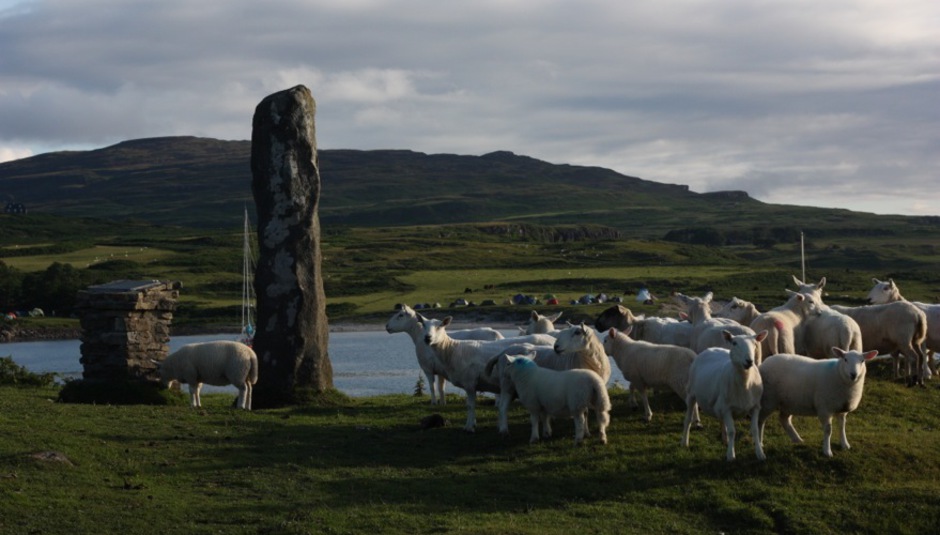 The Isle of Eigg. Six hours north-west of Glasgow by train and ferry. A good place for a festival? One of the best. There’s something about travelling just beyond the bounds of reason to get somewhere; about a place where the festival organisers greet you as you clamber onto the harbour, and where you tramp across the seashore at low tide to reach your campsite, a grassy green coastal bluff where sheep graze placidly. From the moment we set foot on it, it’s clear that Eigg is a magical place.

Johnny Lynch, aka The Pictish Trail – and label manager of Fence Records – is the man behind Away Game, the festival that’s taking over Eigg for the second time. In 2010, the first Away Game was here; in 2011, Home Game was in Fife, and this year, having moved here himself, Johnny has taken the festival back to the Hebrides. Already a little legendary, it sold out in minutes, despite the line-up not being revealed till months later.

We set up tents under the bright sun and troop through the woods to sit cross-legged in the grass for an unscheduled guitar performance from King Creosote. As he takes requests and we sing along, things begin to feel intimate; faces are becoming familiar; the dogs that roam through the crowd already seem to belong to everyone. A little later, we’re inside the main venue, the Céilidh Hall, where Edinburgh’s Meursault storm through a fantastic set, including several songs from this year’s Something for the Weakened. I haven’t seen a singer throw himself so ferociously into his performance for a while, but Neil Pennycook holds nothing back. After, we catch up with them on their way to the campsite and learn that they’d gone on stage moments after arriving on Eigg. Showing such passion straight after a long journey is impressive, and it sets a high bar.

Trundling to the nearby Marquee – the second stage – I watch a sparkling Slow Club set and the Pictish Trail treats us to some lo-fi beauties, and the means and ways of Away Game start to reveal themselves. The mix of musicians, festivalgoers and locals makes for a phenomenally convivial weekend; everyone knows everyone, and while I feel like a bit of an outsider, there’s not a soul who doesn’t have a ready smile and generous banter. I decide to watch The Massacre Cave on a whim; I like the fact there’s a local metal band and I like the bloody history of their name – back in 1577, 395 locals were asphyxiated in a cave in the south of the island during a feud with the Macleods of Skye. The band surprises me by being my favourite act of the festival. Their relentless, jagged guitars and guttural shouting are irresistible, and I join the raucous headbangers up front who keep pace with the songs’ breakneck speed. With the crowd in such a rabidly good mood, unselfconsciously thrashing about like crazy fuckers, the Massacre Cave’s set perfectly captures this weekend’s ebullient spirit.

Clear skies on Saturday mean a four-hour hike. Armed with the omnipresent rocket fuel of Jura whisky, we climb the Sgurr – at 390m, the great looming peak of Eigg. It’s a tough climb (and a far cry from my usual daytime festival activity – lying down staring stoned at the sky, listening to bands), but the view at the top is beyond beautiful. The sea shines into the distance, dotted with islands. In the afterglow of the hike we bask in a magnificent set from Gruff Rhys, including a slowed-down, impossibly sweet version of ‘Honey All Over’ and a heartfelt ‘Candylion’, sung to his toddler daughter, who shows her appreciation by attempting to mash herself into the speakers at the front of the stage.

François and the Atlas Mountains play songs that pulsate with underwater dreaminess, turning the end of their set into a euphoric techno knees-up. The fiddles and flutes of céilidh band Kan prove bewitching; jumpers are yanked off, drinks are downed and all manner of idiosyncratic jigs commence.

Jon Hopkins keeps the revelry going with his lush tones and textures, and the same people who I’ve seen throw their necks out to the Massacre Cave and do-si-do to Kan are right here now, dancing to Hopkins’ beats as though they’re born ravers. Outside in the rain, we huddle around the bonfire and talk of tents blowing over in the wind. I head to see longtime favourite Nathan Fake. Tonight he’s adventurous, barely settling into a groove before swerving off elsewhere. It’s brain-messing stuff, make no mistake, and I slip out just before dawn, neurons sufficiently haywire, and head through the silent forest and the mist rolling in from the sea to my wind-battered tent.

By Sunday, a sense of survival settles in alongside all the warmth and beauty. The sea and sky are bleak, the wind is relentless and sleep has been sparse. In response, we get a great indication of just how lovely this festival is – Johnny jumps on stage to let us know that if anyone’s tent has broken, he’ll find them somewhere to stay. My mind slips back to the chaos of Bloc a few weeks ago and its organisers’ invisibility. Away Game is different class, run by truly generous folk with the right priorities.

After more alcoholic fortification, we watch a stunning acoustic set from The Twilight Sad. Standing alone, wet, muddy and miles from home, listening to James Graham’s searing voice, I fall into some kind of profound melancholy catharsis. Of course I do. It’s the bloody Twilight Sad. The navel-gazing doesn’t last long though. After guzzling some delicious barbecued mackerel (thanks to the tireless work of the locals, we didn’t go hungry), we watch a fun solo set from Euros Childs, including a gorgeous version of ‘Spin That Girl Around’, though I feel a heretical pang for the lush instrumentation of the Gorky’s era.

After sunset, we hit the most incongruous rave-up in the world; up on Eigg, where the wide open sea meets beaches and forests, where the 90 residents are left alone most of the year, the sounds of Dr Dre and Talking Heads fill the island air. It’s the party at the end of the Earth – the place you can’t quite believe you’re at. Back to the tents we finally roll, waking at 7am to leave, feeling chilled by the weather and warmed by the people, the music and the magical atmosphere. Johnny is at the 8.30am ferry to wave off every last one of us, and as we sail back over the choppy sea to Arisaig the feeling is unanimous: it’s been amazing.