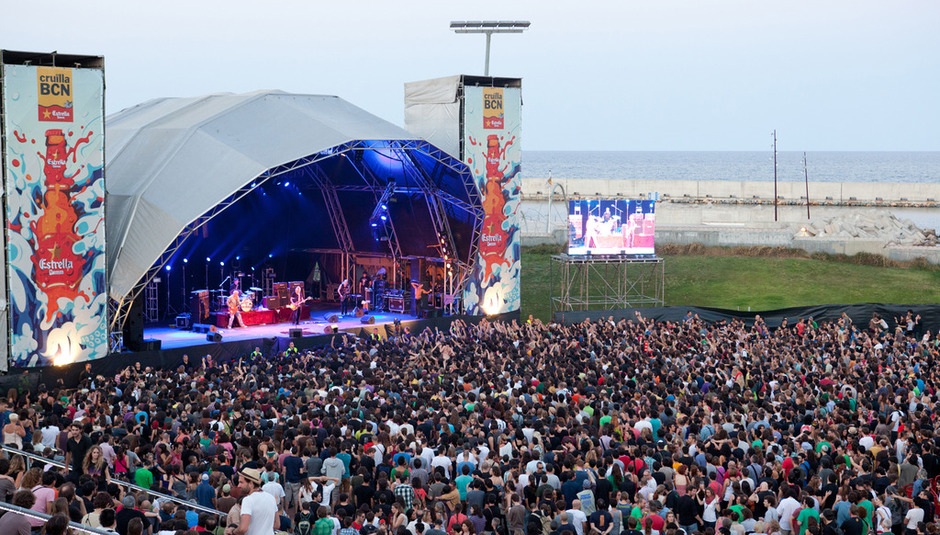 Welcome to the fourth in our irregular series of dispatches from Barcelona. Having just about recovered from simultaneously moving house and attending Primavera Sound just over a month ago, DiS returned to the Parc del Fòrum site refreshed in order to check out the fifth edition of the city’s Cruïlla (‘Crossing’) festival, which took place earlier this month.

Broadly speaking, Cruïlla falls somewhere between Barcelona’s two largest music festivals: if Primavera Sound is more about watching and Sónar geared more towards dancing, Cruïlla simply offers a fantastically diverse, genre-hopping line-up that encourages partying more than anything else. This year’s bill featured luminaries such as Iggy & the Stooges and the Specials alongside newer stars such as M.I.A. and Sharon Jones, propped up by an exceptional array of local and international talent.

Partying while listening to some brilliant music, then, and while it takes place at the same venue, the feeling and atmosphere at Cruïlla is markedly different to that of Primavera Sound. For a start, the festival operates on a smaller scale (and at a lower price), taking place over two nights and across four stages without dominating the entire Parc del Fòrum site (a massive concrete jungle situated on the coast to the north of the city). There are fewer people, too. This is the festival my friends here make a point of attending every year, and as such it isn’t beholden to any notions of what is particularly cool or current. It feels, basically, about as intimate and relaxed as you could expect a festival set in one of Europe’s most visited cities to feel, and it is all the better for it.

Friday is hot and sunny, and Mexican singer Julieta Venegas is trilling sweet, lilting pop songs from the Cruïlla stage. Backed by a large band and channelling numerous styles through a light, Latin filter, the effect is pleasing and well received by the crowd, but before long I head off to the Cases de la Música stage to witness Barcelona’s own Los Tiki Phantoms entertaining the masses. And entertain they certainly do: clad in gold waistcoats and fearsome masks (see below), they kick out a riotous storm of surf-rock guitar which soon finds one of their members down among the crowd, their set peaking with an implausibly brilliant cover of A-Ha’s ‘Take On Me’. Upon arriving at the festival earlier in the evening, the first music I hear is a bunch of young types cranking out the riff to Iggy & the Stooges’ ‘I Wanna Be Your Dog’ on a small stage set up with drums, bass and guitar for the public to try out. It makes for a welcome reminder of the cross-generational appeal someone like Iggy Pop (pictured) holds, as well as nicely setting up my first time in the presence of the punk icon. Neither he nor his band disappoint, getting things underway with a suitably sludgy ‘Raw Power’ and proceeding to rock harder than anything else I have seen or will see (save one particularly special show) over the weekend.

He gyrates, thrusts and howls his way through the band’s 90-minute set on the Estrella Damm stage, inviting audience members “to party with the band” and at one point bloodying his lip as he launches himself into them. If the set doesn’t quite maintain the intensity of its opening one-two (‘…Power’ and ‘Search and Destroy’), it doesn’t dip much either: “This ain’t no techno; this ain’t no fucking doosh-doosh-doosh-doosh,” Iggy tells the crowd, “we are the fucking Stooges, and we play the blues.” It feels a bit rote to say it, but at 65 years of age Iggy Pop is as much a sinewy, simmering force of nature as he ever has been, and I hope those kids playing ‘I Wanna Be Your Dog’ enjoyed seeing its maker blast through it tonight. Next up, my still-reeling friend and I head over to see Nigerian-German singer Nneka on the Cruïlla stage. A slight figure with a piercing voice, she wows onlookers before a crescendo that should, really, be absolutely terrible: soft-rock solos, rapidfire MCing, grinding riffs and all, yet her voice is that powerful – and her (Igbo) rapping that proficient – that it is actually something of a spectacle.

Later, in front of a massive banner that proclaims ‘Gypsy Punk’ to the world (or at least the amphitheatre that constitutes the Estrella Damm stage), Gogol Bordello rip through their unholy fusion with delirious abandon, frontman Eugene Hütz a superbly compelling figure, his Ukrainian/Lower East Side inflection a pleasure to listen to, whether speaking affably with the audience or careening through these charged, frantic songs. MC and percussionist Pedro Erazo is similarly energetic as he works the crowd in Spanish, while the frenzied fiddle playing of Sergey Ryabtsev is just unbelievable. The band go down a storm, Hütz making a point of shouting out Iggy Pop as they make their triumphant exit.

At about quarter past nine on Saturday my friends are yet to arrive, so after a pleasant set by Toumani Diabate and assorted collaborators I drift into the Ramon Llull tent to watch local duo ZA!, and it is unlike anything I have ever seen. Onstage there is a long-haired blond man hollering unintelligibly into a microphone, a strange, mechanised voice also making its presence felt. The one at the mic is Papa Dupau (pictured), and closer inspection finds the owner of that other voice to be drummer Spazzfrica EHD. Soon Dupau picks up a battered guitar and the pair get down to their instruments, and the result is something that defies – mocks, even – easy categorisation. The tricksiness of Dirty Projectors plays into Dupau’s ranging, blistering guitar lines, perhaps, and there is something of Battles’ John Stanier in EHD’s muscular, pin-sharp percussion, but this group quickly spin into new territory by way of their wildly inventive music. Incorporating myriad pedals, loops, and a trumpet into the remaining hour of the set, Dupau screams like a banshee while a sweaty, topless EHD makes circuits round the tent using anything in his path a percussive tool. The band are cheered back on for an encore which begins with chopped vocal loops the pair supply while stood at the mic together, holding onto each other lest the force of their cry separate them. EHD eventually returns to his drum-kit and the duo thrash out a massive, white-hot jam. It is incendiary stuff, but not without a sense of joy, either – this is not po-faced, ‘experimental’ music (their stage names might have given that away), rather, music to give yourself over to or simply gaze upon in awe. The end of the set sees Dupau hurl his guitar followed by his microphone into an obliging crowd, both of which find some welcoming suitors. But Dupau and EHD are the real stars of the show, and they embrace to huge, well-deserved applause. If you have any interest in weird, wonderful, willfully original music – if you have any interest in music whatsoever, really – visiting ZA!’s Bandcamp page will probably be the best thing you do all day.

The Specials on the Cruïlla stage, then, have a tough act to follow, but then, they are the Specials and ska is the best music to dance to in the world. Their set is fluid, tight, eminently skankable, and although they don’t play ‘Ghost Town’, ‘A Message to You, Rudy’ is fine, a tribute to Amy Winehouse is touching, and dancing, dancing, dancing. Onto M.I.A. then, and the only real disappointment of the festival, albeit one that is more or less salvaged by the end. Arulpragasam is due to appear at half past eleven and by this point the huge Amphitheatre is swelling with excitement, the stage adorned with colourful bunting and dry ice. But instead her DJ comes out and sticks on some weird shit and visuals, which ensue for about 15 minutes before the stage lights go down completely. They come back on after a while, and, nearly 25 minutes into her allotted 75-minute set, she takes the stage and offers a muddy ‘Bamboo Banga’.

Things don’t improve much to begin with: ‘Pull Up the People’ and other cuts from 2005’s Arular never really take off, and it becomes abundantly clear that, for all her grandiose statements and penchant for controversy, Arulpragasam isn’t much of a show(wo)man. She looks amazing – fashioning blond locks, an oversized red hoody and white denim shorts (as below) – but when she tells the crowd that she wants to “remember” the show it comes off more like an order than anything else, and lacks any real fervour on her part. As such, a stage invasion feels perfunctory as opposed to exciting, and only on a few songs does she really light up.

When she does, though, on ‘Story to Be Told’, ‘XR2’ or, brilliantly, ‘Galang’, the crowd does with her, and it saves everything. ‘Paper Planes’ sees her off, its shotgun/cash register motif ringing out with force and clarity, while the encore is even better, new song ‘Bad Girls’ hitting harder than anything else all night and a closing run through ‘Born Free’ suitably thunderous. Sharon Jones & the Dap Kings are next up over on the Cruïlla stage, and the band mercifully don’t keep their audience waiting long before their frontwoman emerges and proceeds to bellow her way through a slick, impressive set. I’ve been waiting to see Jones and her troupe since I came across the superlative Shuggie Otis cover they contributed to Aaron and Bryce Dessner’s Dark Was the Night charity compilation a few years back, and though that tune doesn’t get an outing tonight, the picks of their studio albums sound tremendous, and Jones herself is every bit the performer I had anticipated.

Things start to get a little hazy by the time the festival draws to a close with Cypress Hill in the Amphitheatre (pictured) followed by 2 Many DJs on Cruïlla, as I guess they should be with regards the former. ‘Insane in the Membrane’ and especially ‘How I Could Just Kill a Man’ still sound suitably full-on, B-Real and the crew certainly not lacking for energy, though a preview of some Rusko-produced new material towards the end of the set doesn’t do that much for me (“That’s not Cypress Hill,” my friend intones). But, finally, the Soulwax pair do what they do through the early hours, and, really, I don’t think there are many better ways to end a festival. Hip hop vs hip hop: Why we must defen...