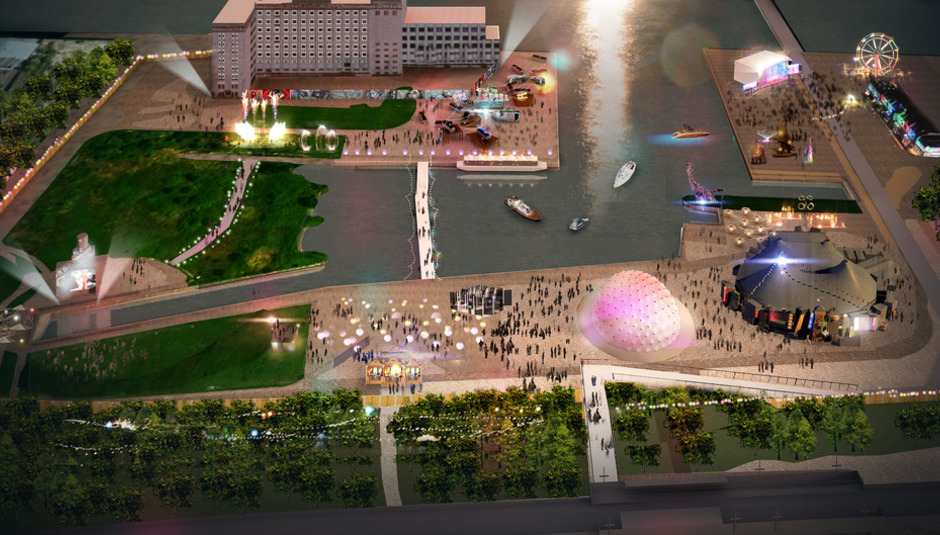 As you're possibly aware, London's docklands are now home to an exotic new venue called London Pleasure Gardens, where all sorts of fabulous things will be happening this summer. And foremost amongst them is the Bloc festival, which has been lured away from the angry bouncers and chilly chalets of Butlins Minehead and brought over for a mind boggling two days of electronic fun. Lauren Strain and John Thorp offer a preview.

This disgustingly young Brown University student makes unsettling, dysmorphic music that shares its sonics with house and dug up field recordings but its sensibility with a sort of mouldering, emptied-out soul. The languid, predatory pulse of debut album Space Is Only Noise (2011) becomes surprisingly urgent live, however; and the feeling that anything might be about to happen – as evidenced on Jaar’s genuinely fucked up Essential Mix – is chillingly tangible. (Lauren Strain)

A DJ set from veritable techno legend Carl Craig is usually lively enough in itself, but Craig’s sprawling, analogue live show has been impressing festival and lucky club audiences worldwide for the past few years. Craig’s ‘69’ alias (that’s ‘six-nine’, potential smut pedlars) has been going steady since 1991’s seminal 4 Jazz Funk Classics EP, and taking time from behind the decks, Detroit’s son is sure to impress with an hour or so of his own productions, straight from the vintage source. Failsafe, basically. (John Thorp)

The notoriously elusive Darren J Cunningham followed up his aqueous wash of dub and blubber, Splazsh (2010), with this year's R.I.P. to almost universal acclaim. Traversing everything from shy, sweetly keyed lullabies (N.E.W.) to a sort of regurgitated contemporary classical (Serpent) – yet still possessing enough thrust to satisfy a Funktion One (Shadow from Tartarus) – R.I.P. is a record of damaged, danceable delicacy, and not as challenging as many would have you believe. (LS)

Steve Reich w/Bang on a Can All-Stars

Two titans of the modern classical landscape, Steve Reich and the 25-year-old new music collective Bang on a Can All-Stars come together for an exclusive UK festival show. Reich’s influence on almost every other billing at Bloc is irrefutable, and his stature as a forefather of contemporary electronic music, from techno and its subgenres to dubstep in its more forward-thinking guise, seems to be more potent now, in his seventy-fifth year, than ever before. Meanwhile, the All-Stars – who earlier this year released an anniversary album, Big Beautiful Dark and Scary, featuring collaborations with a jamboree of artists including Dirty Projectors’ David Longstreth – are famed for their energetic, effervescent live shows. This is pretty much a once-in-a-lifetime opportunity to witness these giants collide. (LS)

Check out a fascinating interview with Reich here

A rave on an actual fairground.

Co-CEO of Manchester’s Hoya:Hoya, Mary Anne Hobbs-endorsed Illum Sphere has risen quickly from his 2009 debut, The Incoming EP, to remix duties for Kuedo, Martyn, and Radiohead. Tethered to a canny knack for contrasting light and shade, his sets are wildly wide-ranging – and occasionally revelatory. (LS)

Carefully curatorial yet crowdpleasing, Midland’s sets do all the right things without ever seeming obvious. Operating with a seamless ease that, in this Boiler Room mix, marshals us from Actress’ dazed Ascending to Joy Orbison and Boddika’s shuddering Dun Dun in under 10 minutes, his almost effortless sense of lift should provide a perfect Friday night build. His latest EP, Placement, on Will Saul’s Aus Music is one of the finest underground records this year. (LS)

Punters who’ve arrived early to a label showcase for Glasgow’s Numbers in the past year will have caught Redinho’s offbeat and charismatic live set. Hours before label boss Jackmaster is likely smashing it out, his latest release for the label, Stay Together, will have provided the first really memorable tune of the night. Feeding his voice through a Talkbox and manipulating a Juno every which way but remaining loose, Redinho has lots of tasty unreleased material that explores a sort of melancholic funk unique to club music at the moment. (JT)

The recent prominence of low end has left plenty of space for producers to flesh out the sparse atmospherics of house and techno, winningly exemplified on Cosmin TRG’s excellent 2011 album Simulat, a varied listen that’s often industrial-heavy in offset to a palette of warm, airy electronics. The sheer range of labels that have released his music pays testimony to its innovation – as well as recording for Ninja Tune and Modeselektor’s 50 Weapons, he also contributed the first release to Hessle Audio back in 2007 (without his ‘Cosmin’ prefix). Though his sound has evolved, the same personality and strength of innovation still bears fruit – and his current formulas are sure to be stretched further in the live context.