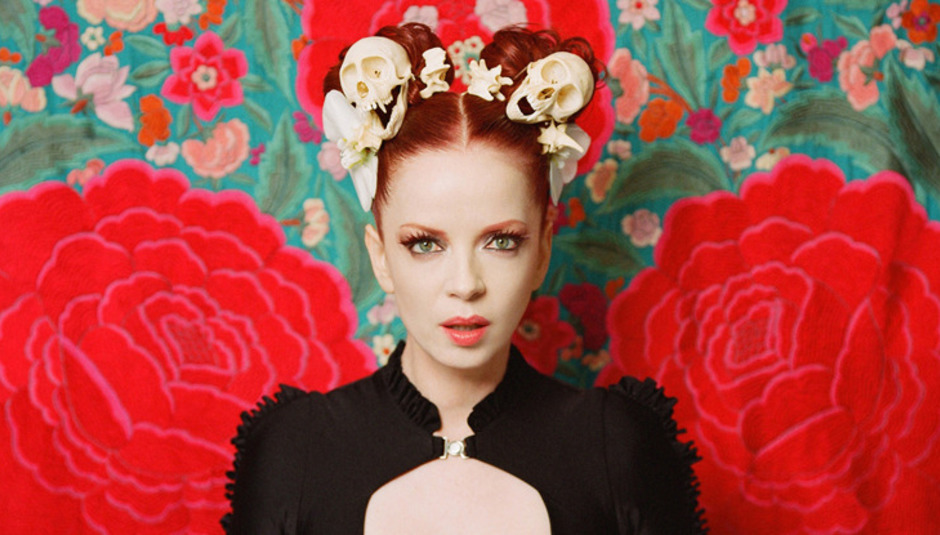 “To take seven years off and see all the bands who came up after us, I think there were times when I did sit at home and think: ‘I don’t understand why I never felt I was good enough because I could smoke 99.9% of this bunch.’”

Shirley and I are sat in some sort of ersatz library at The Langham, a grand, swanky hotel opposite BBC Broadcasting House in central London and thus a prime location for anyone wishing to launch an assault on the nation’s airwaves. Shirley is “fantastic” because she’s just drunk half a bottle of wine over lunch and apparently ate three or four contemporary pop acts for breakfast. She seems to be rather enjoying being back in the saddle of this record-promoting lark. She’s brilliant company, with a glint in her eye and her tongue in her cheek. The seven year gap since the last record doesn’t seem to have mellowed her.

The rest of Garbage: Duke Erikson, Steve Marker and Butch Vig are nowhere to be seen. It seems hard to believe now but there was a time when it was the trio of male producers, most notably Butch “That bloke who produced Nevermind” Vig who were perceived as running the show, with their red-headed front-woman cast as the eye-candy who should be grateful to have been plucked from the relative obscurity of goth-pop combo Goodbye Mr. Mackenzie. Hence Shirley’s aforementioned feelings of inadequacy:

“I spent my entire career feeling that I was coming from a position of lack. When you’re a young woman who gets into business with a renowned and revered producer, the way the world views that can be complicated and diminishing for a less experienced, younger, unproven talent. I constantly felt, because I would read it everyday in the press, that I wasn’t worthy of such a relationship. Even though I am a bolshie, feisty person it did eventually wear me down, if the truth be told.”

While she’s now more confident in herself than ever, she’s not even close to forgetting the struggle she went through as a woman to be taken seriously as an artist. When I bring up feminism, she raises her concern that the types of roles women are allowed to play in mainstream music have become increasing circumscribed: “I feel that in the Nineties when we first came out there were a lot of different types of women being heard in the mainstream. In the last ten years all it has been is women singing pretty ditties and showing their titties. There’s not been really many records that have been played on mainstream radio of any depth, or have indeed even been penned by women. That disturbs me a little. Plenty of pop music. Plenty of catchy, all-singing, all-dancing girls out there, but there’s not really many agitators or provocateurs or women in disagreement with what’s going on.”

There’s the odd exception, of course. Shirley’s a big fan of one particular filthy-mouthed New Yorker: “Azealia Banks blows me away. Fucking unbelievable. When I heard ‘212’ it was like hearing ‘Why D’ya Do It?’ by Marianne Faithfull for the first time. It blew me away, and I was jealous because that’s something I can’t do. She does it brilliantly and I’m so grateful that there’s somebody like her out there. But she’s the 1%. Azealia is a phenomenal, fantastic, welcomed force right now, but her challenge will be to have a career that lasts more than two years.”

With the music industry still softly imploding around all of us it’s a tough time for anyone to be thinking about career longevity, but her concerns come from a hard won sense of having climbed a mountain and found few compatriots at the top: “It’s tough for anyone to be in the music industry, but I think what has happened in the last decade is that a lot of women have forgotten what a struggle it was for previous generations to even get a foot in the door in the music scene and so have forgotten how tenuous their holding is. As a result I haven’t seen much effort into trying to redefine the way women have historically been viewed as solely visual treats and playthings. Make no mistake, there is still an incredible struggle for women to be treated as equal around the world and in the music industry. I’ve always felt a responsibility to conduct myself a certain way. Before I broke into the music scene there weren’t that many empowered women getting played on the radio. There are still very few women who have managed to navigate a career of any length or are considered of any worth and that bothers me.”

Seventeen years separate Garbage’s debut self-titled record and the spanking new aggression of Not Your Kind Of People. She thinks she’s better at her job now than she was back then: “I can’t speak for everyone else in the band but I definitely found it easier to make this record than the earlier ones. We’ve maybe stopped giving a shit about everything aside from making music together as a band and trying to ensure that we engineer our own happiness. That sounds really trite, but actually it’s harder than one might think.”

Needless to say, plenty has changed since Garbage were last treading the boards of publicity. Not least the advent of the age of social media. Shirley is relishing it. The band’s twitter account is staffed by: “Mostly me. Not always, but mostly. At first I railed against it and thought it was awful. Now I see it as remarkably effective tool to inform our following.” There are also new connections to be made: “There’s something really exciting for me to get a glimpse into our fans’ lives. I find it fascinating, and thrilling and sometimes touching. When you realise someone’s spent their entire wage to buy a ticket to your show and travel there and buy the T-shirt… that makes me want to burst into tears, quite frankly. I’ve railed against it, but now I realise that what once was is gone. The mysteriousness and the allure of rock’n’roll as we knew it when we were growing up is gone, but that doesn’t mean that other great things can’t move into its place.”

In some ways, she says, the things she’s proudest of herself for are the things she didn’t do. She was never lured by the carrot of a pop solo career. She “didn’t take my clothes off for a million dollars.” She’s still every inch her own woman, but knows now that the temptations of fame and fortune are “hard things to resist. It looks easier on paper.”

The greatest joy of having Garbage back together again is being back on stage. That’s where she’s happiest: “I didn’t have a flutter of nerves even on day one. I feel more comfortable onstage than I do anywhere else in the world in my life. I feel completely uninhibited. I just don’t feel self-conscious, in any way, shape or form, and yet in my day-to-day life even now I feel self-conscious.”

That sounds like the mirror image of stage fright, I venture.

“Exactly. I don’t know why that is and I’m sure it’s not healthy. I don’t feel that the audience is judging me in a negative way, at all. I feel that they’ve come because they love our music, and I’m just a vessel for that. I don’t feel that I’m being scrutinised and judged and criticised, whereas in the rest of my life I do. I feel that people are constantly looking at me and judging me and making assumptions about me. It’s nothing to do with being famous. My whole life I’ve felt that way….”

She pauses as she realises we’re drifting into the realm of therapy. She laughs at herself loudly and then pouts at me: “Can you explain it, doctor? Can you cure me?”

I appear to be accidentally trying it on with Shirley Manson. I’m saved from further embarrassing myself because she’s due any minute over at Broadcasting House. As we get up to leave I tell her that I hope the album does well.

Not Your Kind Of People is out now.