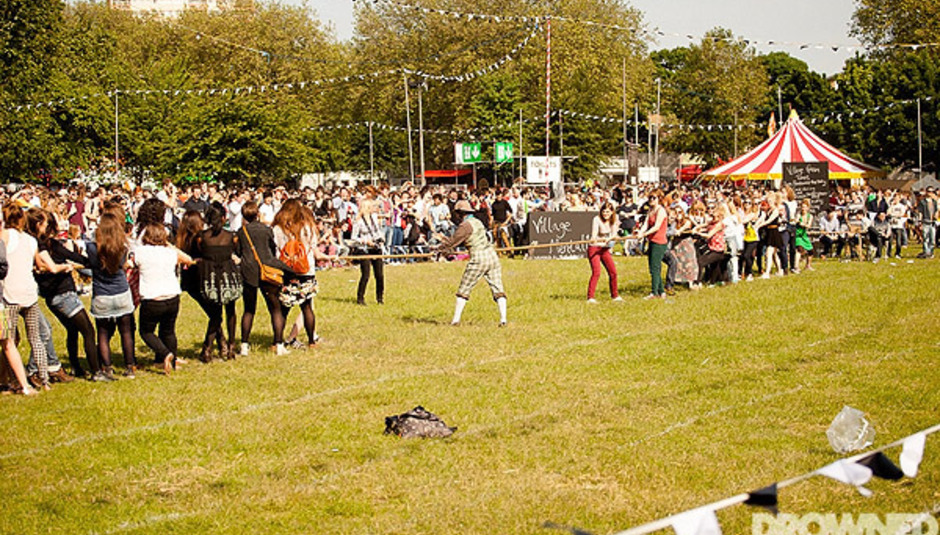 It may have moved back by two months, but Field Day wasn't going to fool DiS reviewers Andrzej Lukowski and Mark Ward - they caught up with its sixth edition the weekend before last and these were their thoughts. Photos by Minh Le.

To get the moans out of the way first: while I was lucky enough to be waved into the sixth edition of London’s most grumbled about festival in roughly 30 seconds flat, had I actually paid for a ticket it sounds like it might have been something closer to an hour, while being growled at by a sniffer dog. There’s no earthly justification for charging £4.30 for a tinny of San Miguel, let alone a fiver for some godawful fruits of the forest flavoured cider. Ordering Julia Holter offsite after her set had finished somebody wanted her parking spot is straight up cuntery. And blah blah, it’s full of the story of posh, loud students who’d consider Secret Garden Party a bit on the feral side.

But realistically, this was clearly the best edition to date in many ways: larger (and think fewer?) tents, much better spaced out meant that the sound bleed that always laid the festival low was nigh on eliminated. Not only that, I’d probably go so far as to say the sound was frequently good, with the main stage seemingly no longer constrained by such stringent volume restrictions as in previous years. So that was nice.

Kicking matters off at 12.30, soon to be persona non grata Julia Holter was pretty astounding. Sweet and shy but a more imposing physical presence than one might expect, her one drummer, one cellist band (with her manning a Korg) gave the songs a more tangible, organic feel than the gossamer electronics of Tragedy and Ekstasis, sometimes warm and joyous, sometimes achieving deep, roiling waves of sound that thrillingly counterpointed her high, powerful voice – ‘Goddess Eyes’ verged on operatic force.

Skipping forward a few hours, a time traveller from 2011 might have assumed Grimes was a bona fide celebrity, as opposed to somebody with a number 67 album and one appearance on Jools under her belt. The Village Mentality tent is so uncomfortably full of such incredibly loud people that I have no real idea if Claire Boucher’s set is any good or not – I suspect she’s have fared rather better on the main stage. By contrast Sleigh Bells draw roughly the same crowd, but their raucously unsubtle party jams are probably better sampled in these sorts of sweaty environs than, you know, some sort of situation where you’d require nuance and whatnot.

The reformed/back from hiatus Mazzy Star are probably not the band for Field Day: beautiful backing projections and the odd piecing passage of woozy country noir gorgeousness attest to what they might be like on home turf, but it’s just too hushed and intimate for last thing at a festival in a massive tend full of drunk people; Hope Sandoval is borderline inaudible, and the music is only fitfully clear. I suspect standing nearer the front would have solved most of these problems, but still, it doesn’t quite ‘work’. (AL) With his shaggy beard dyed a brilliant blue, R Stevie Moore bounded onto to the Quietus/Village Mentality stage with an energy belying his 60 years. A weedy opening guitar riff - bringing momentary fears Field Day would once again succumb to the sound problems that have dogged it in the past - reveals itself to be a deliberate feign before his young band amped it up to deliver a sucker brutal punch of dominating garage rock. Songs, occasional interludes of concrete poetry and a proclamation of himself as the 'Jubilee Jesus' are all delivered in a kind of staccato drawl - each syllable carefully enunciated in Moore’s deep Tennessee twang. Things turned from the sublime to the ridiculous when über-fan and recent Moore record boss Tim Burgess clambered onstage with a tambourine. That Burgess didn’t know the words when Moore tried to get him to share the mic proved funny if forgivable considering the older man’s catalogue of some 400 albums; that he continued playing the tambourine quite so badly for quite so long was hilarious.

Liars benefit from playing the big outdoor stage during the one prolonged patch of blazing sunshine in the afternoon. The weather fits their new material, which recalls an evening’s narcotic-enhanced revelry dragging out into the baking midday heat rather than their fuzz-drenched thunderstorms of previous records. It’s a feel that is intensified by the sight of the band, sleekly incongruous in their new black suits like wild-eyed, coked-up Patrick Batemans on the prowl. As with their albums, Liars onstage are constantly evolving. They’ve stripped back to a three-piece from the beefier quartet of recent live incarnations and are still finding the way to perfectly reproduce these latest rumbles. They are nonetheless spectacular rumbles - bass was so loud that the air appears to shake. The signs for their newest renewal are really rather good.

A combination of some of the finest musicians Mali has produced in the last few decades and a Cuban band led by one of the original members of Buena Vista Social Club, Afrocubism always promised exceptional musicianship. It delivered wholeheartedly, with the highlight set of the day. The hallucinatory rhythms woven with Bassekou Kouyate’s ngoni lute, Toumani Diabaté’s kora, Djelimady Tounkara’s guitar, Lassana Diabaté’s balafon and Kasse Mady Diabaté voice proved more memorable than Eliades Ochoa relaxed acoustic strumming, but the addiction to them of a mariachi trumpet section could only ever be a delight.

Pretty as his music is, by comparison Beirut was doomed to sound a little tame back on the main stage. Zach Condon can seem more engaged with the musicians around him than the crowd in front of him. His voice though continues to impress though, and songs like ‘A Sunday Smile’, ‘Nantes’ and ‘The Gulag Orkestar’ will always raise a smile, and, on this occasion, a very particular massed dance (MW)