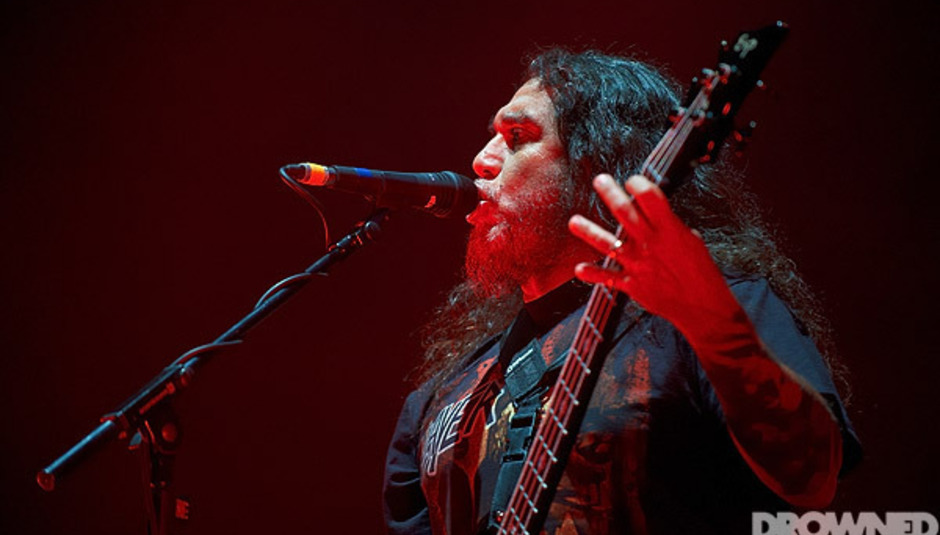 With ATP's London based-festival back for a second year and a much earlier slot in the calendar, the British festival season is GO, sort of. Adam Anonymous and Russell Warfield went to bear witness to the 2012 edition of I'll Be Your Mirror, held once more at sunny Alexandra Palace in London, England. Photos by Gary Wolstenholme.

We may as well get this out the way: attending the first night of I'll Be Your Mirror means one of two things. Either you've got the whole weekend's schedule balls around breasts or you're here for Slayer. Because while IBYM's second and third days conform to a format more readily identifiable to regular attendees of its big brother event, All Tomorrow's Parties, this is a glorified metal gig sent to raze your very molecules (read: cellular matter used for semi-crucial tasks such as hearing).

That's not to discredit the undercard as such, mind, even if Death Grips' disappointing cancellation leaves us faced with the less visceral prospect of A Storm Of Light kicking things off in the West Hall. In the same space, those claiming to occupy that hallowed area of arseholedom aka 'in the know' won't hear a bad word about Yob as a live proposition. Perhaps the excitable eulogising is an unfair starting point for us, as on tonight's evidence the grizzled Oregon wanderers have none of the crusty outer layer we're craving. In fact, at times it's all very reminiscent of post-metal overlords Neurosis's latter-day incarnation, minus crushingly weighty dam-break extremes hurtling forth with the impact of an express train using your eye sockets as impromptu tunnels-slash-orifices.

Which 100 per cent is not an allegation sludge legends the Melvins are ever likely to run into this side of passing into the great rock show in the sky. Visually, there's symmetry to keep even OCD sufferers breathing easy, King Buzzo and Jared Warren's twin shocks of electrified hair flanking muscular dual drumkit action. For all the neck-wreckingly heaviness, however, the unexpected high unfolds when 'The Water Glass' breaks down into drill sergeant call-and-response, proving that 20 albums deep, the Melvins are far from out of ideas yet.

Wolves In The Throne Room's cacophonous black metal tomfoolery is ever so slightly misaligned what comes before and the blastwave that follows in the shape of stoner rock blueprint layers Sleep. But by now, even Matt Pike's gobsmacking riffing is fading into the back reaches of our attention.

Half an hour later, you don't need to know more than this: it's fucking SLAYER, rolling back the years to play motherfucking REIGN IN BLOOD. If, by this point, you're aren't tipsy on a level that could qualify for a cameo on one of those Britain's Stupidest Drinking Binge Cities television exposes, something has gone awry. Well, that's our excuse. And by bringing together thousands of disparate metal fans in a manner more normally associated with religious mass hysteria, there's a definite creeping aura that this is rather a once-in-a-lifetime event. From the chilling banshee announcement of thrash metal's hands-down, flat-out finest five minutes, 'Angel Of Death', right through to the (sort of) title track 'Raining Blood', for half an hour, Slayer are utterly peerless. Sure, there's an encore, but it's a mere footnote. Better still, our vantage point doesn't burden us with a view of Kerry King's face, merely the mustang guitar squeal of an album that remains immovably immense a whole quarter of a century since it first bit big bloody chunks out of speakers. (AA) Even the day after Slayer, I arrive at Alexander Palace to find the clientèle are still a pleasantly uncommon mixture of metalheads and hipsters. And an early afternoon set from the brilliant Harvey Milk was just one of many rewards for the heavy music fans who decided to stick around until the weekend's completion. Grinding riffs and driving beats locked together into a devastating onslaught (for a three piece at that), with occasional passages of galloping tempos allowing Creston Spiers to explore more expressive and blistering lead guitar lines to wonderful effect. I entered the set as a member of the hipster demographic rather than the metalhead one (if either), but I left a willing convert.

ATP has quite a reputation for plying nostalgia – reuniting bands of a bygone era, or coercing acts to perform seminal albums back to back. Saturday afternoon sees two such moments in quick succession with sets from Codeine (their first London gig since the mid-Nineties) and Mudhoney. Truthfully – I 'wasn't there', as it were, when these acts were operating during their heydays, and, without the pre-invested excitement of people I overheard swooning over a massive box-set of the band's collected re-issues, I found it significantly more difficult to engage with Codiene having no prior experience of the lauded outfit – the dreary vocal feeling unequal to the expansive walls of guitar sound.

Mudhoney, on the other hand, put on a hell of an show for the relative novice – immediate refrains and blistering punk-blues riffs crackling with enough energy to invigorate even with unfamiliar material, while the more universally recognisable moments (seminal debut single 'Touch Me I'm Sick', for example) provided a tantalising taste of what the die-hards must have been experiencing – a set as electrifying in spirit as it was clinical in execution.

The night concludes with a phenomenal back to back from Dirty Three and Mogwai – two bands which complement each other superbly both in theory and in practice. Dirty Three, however, emerge as the unsurprising highlight of the weekend. Warren Ellis, straddling that uncommon duality of being both virtuoso violinist and genuinely funny comedian; offering long, rambling monologues which give rise to longer, meandering violin passages, their classic weepers and rockers sitting comfortably alongside newer material (featuring Ellis giving a couple of rare piano turns) from this year's LP. Following one of the most overwhelmingly affective live bands currently in existence, curators Mogwai have a lot to live up to – and in plying a form of post-rock which has arguably slightly left them behind since they shaped it 15 years ago, Mogwai ultimately fail to outperform their immediate support despite their mastery of the mode. But outperforming the Dirty Three is a tall order, and Mogwai's expansive sound is still of the highest calibre – filling the vast room and providing a range of towering, natural climaxes to punctuate Saturday with a graceful sense of closure. (RW) It's a treat to start a sweaty Sunday by diving into a darkened room of drone and ambience, spending some time recuperating in the semi-supine position. First treat of the day – and the weekend's foremost previously-unknown-to-me highlight – comes in the form of Blanck Mass: beginning his set with incredibly visceral drone before cleverly introducing rhythm, samples and soft melodic phrases after 20 minutes or so; it's rapturous in its revelatory, transcendental qualities. Demdike Stare, working in similar territory immediately afterwards, made more productive contact between their drone and eerie visuals made up of vintage VHS footage, but ultimately failed to take the ear on as much of a hypnotic journey as their predecessor.

Since I was spending a glorious day indoors in any case, I felt significantly less guilty about spending some time at the ATP cinema. First up was a screening of a rough-cut of What Is This Film Called Love?, Mark Cousins' charmingly self-indulgent love letter to travel, memory and Eisenstein filmed entirely on flip camera. (To justify my watching this on behalf of DiS, I should mention that it featured two brand new tracks from PJ Harvey – the first a swooping voice and piano number, the second a more menacing cut with a growling blues riff, both fabulous and potentially anticipating a more modestly organic direction following Let England Shake). Immediately afterwards, the room fills out to capacity to view an advance screening of Louis Therox's new rumination on porn – as ever, a pleasant mixture of humour and revulsion with no heavy handed conclusions (and, again with my DiS hat on, the man himself revealing a soft spot for Radiohead and Spoon during the subsequent Q&A).

Returning bleary eyed to the world of music, I entered the odd venue for the second stage (a weirdly laid out, conservatory type room which was anti-atmospherically sunny and empty at all times) in order to catch the darling Tennis. I champion this band as desperately underrated – their twee and deceptively simplistic pop throwbacks underselling Alaina Moore's truly spunky vocals and effortless hooks. Sure, the numbers which sport the more meandering and shapeless melodies fail to assert themselves, but the sharply sassy choruses of songs like 'Origins' and 'It All Feels The Same' see Moore truly soar – selling her melodies loudly and true without any need for support from her own studio backing vocals.

Finally, the West Hall anticipates the Afghan Whigs – a nice amalgamation of the general ATP propensity for feverish, loving nostalgia, as well as this particular ATP's disposition towards straight laced rock music. This is a band built for this sort of room: huge, driving beats, beyond-immediate radio choruses, stadium sized, crunching riffs and swooping strings combining to feed the expectations of a crowd who are clearly grateful to have these guys back – closing the weekend on a heartening note of fulfilled expectations and summery rock and roll. (RW)

In Photos: ATP I'll Be Your Mirror cu...