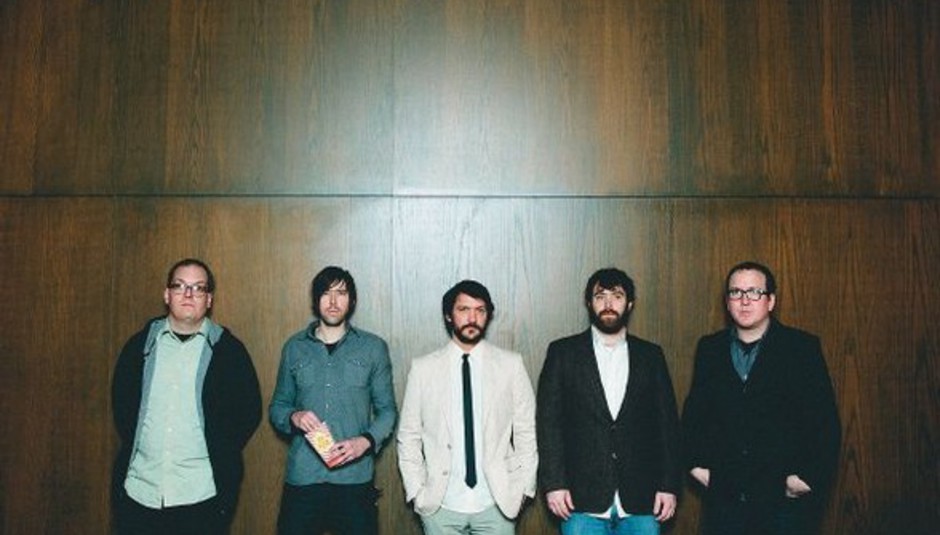 Cursive at Barcelona, Be Cool, Sat 26th May

Cursive at Barcelona, Be Cool, Sat 26th May

Tonight marks Cursive’s first show in Barcelona and only their second ever in Spain, and the timing is far from ideal. Across the city venues are opening their doors for free as part of the forthcoming 2012 edition of Primavera Sound. It is a bank holiday weekend, meaning half the Catalan capital have hightailed it to the coast, while many are perhaps still nursing sore heads following F.C. Barcelona’s Copa del Rey triumph of the previous evening, where Pep Guardiola added another trophy to the pile in a dream exit from the club. There are maybe 40 people in attendance, and the band itself, having just cleared the halfway point of a lengthy European tour, is understandably a little frazzled.

Yet, when they take to the stage and launch into new album opener ‘This House Alive’ it is to a healthy smattering of applause. Flanked by long-time bandmates Matt Maginn and Tim Stevens and backed by exceptional new(er) recruits Dylan Ryan (drums) and Patrick Newbery (keys and trumpet), Tim Kasher has always been a fantastic frontman, and while he doesn’t say much tonight, his is an electrifying presence nonetheless. My girlfriend agrees, qualifying her “really sexy” critique with the impression that Kasher seems to “come alive” when he sings.

And she’s right: Kasher hollers, screams, yelps and whispers his way through the set with rare abandon – no matter that it is a sticky, somewhat under-attended show – while the band kicks out some wonderfully intricate, muscular jams behind him. The audience responds in kind, and as the set accelerates the applause rises in volume considerably. Due to a strict curfew the band is unable to come out for a second encore later in the evening, but it is not for lack of trying on the crowd’s part. Cursive has been a going concern for 17 years now, and the band draws from a back catalogue rife with songs that deal with politics, sex and religion; songs that take inspiration from fairy tales, plays and classic literature. New album I Am Gemini is a rare accomplishment, too: a return, of sorts, to the themes and sounds of their earlier work that comes on with all the force and vigour of a band unequivocally not in the business of replicating past glories. It is conceptual, heavy – heavy, in places – produced by Matt Bayles (Isis, Mastodon), seeing tricksy song structures play out over a dense, almost mythological backdrop (the story of two twin brothers separated at birth). It is a bit mad, but compulsively listenable and quite brilliant; if it is a little ridiculous, it is ridiculously good, also, and following the often weary and disillusioned Mama, I’m Swollen, it finds Kasher and the band revitalised.

To that end, its crushing finale closes the set perfectly, as over around an hour the band blasts away any cobwebs and as said, gains in momentum almost by the second. From Cursive’s Domestica onwards the quintet mines its back catalogue for all its worth – I would say that ‘The Lament of Pretty Baby’, ‘A Gentleman Caller’, ‘Big Bang’ and ‘Retreat!’ are particularly exhilarating, but really, I could pick any song from a showing like this. The Mama material is a revelation onstage too – the encore consists of a rapturously received ‘Art Is Hard’ and unexpectedly massive ‘I Couldn’t Love You’.

Something else that strikes me during the show is how almost funky the band can be when it hits its stride. This is far from easy music. It winds and pushes itself into unexpected territory; it is dynamic, ranging and angular, but it is easy to enjoy, and the five members work as such a tight unit that watching them I often get that feeling you get at the very best rock shows, when you can tangibly sense all the hours this band has put in together, how much it cares about what it does, and how it pays off in performances like this one. As part of a long, foreign tour, it might not mean so much to the group, but will undoubtedly linger long in the memory of those who witnessed it.

The band eventually leaves the stage visibly enthused by its reception, a screen descending over its equipment, an audience whooping for more. Better than ever.

In Photos: ATP I'll Be Your Mirror cu...