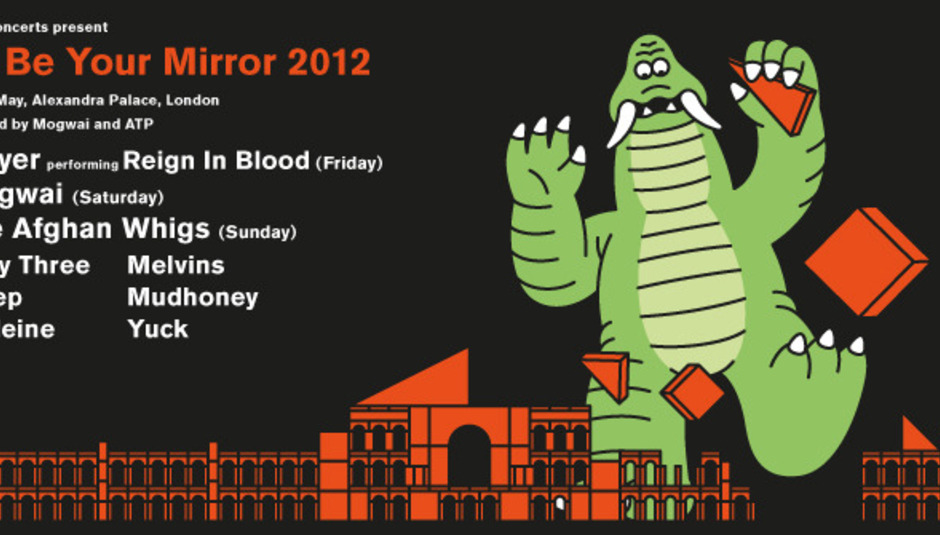 ATP's Mogwai-curated I'll Be Your Mirror event - named after the b-side to The Velvet Underground's original All Tomorrow's Parties 7" single - takes place 25th May 2012 to 27th May 2012 at London's Alexandra Palace.

As I'll Be Your Mirror is the 'b-side' to the main, full-on festival-type ATP event, we got a selection of the artists performing to tell us their favourite b-sides and 7" singles.

You can listen to the Spotify Playlist in full here

Favourite/First 7": 'Rock and Roll Part 1 and 2 'by Gary Glitter. My Uncle had it. Never heard anything so evil and predatory. Wore out my copy when I was 12. Also 'Johnny and Dee Dee' backed with Julie is a Junkie by The Eastern Dark.

Favourite B-side: 'The Warmth of the Sun' by the Beach Boys, which is the perfect distillation of everything brilliant about the band. The most insane vocals you'll ever hear, like they're piped in from another planet, and it makes me want to give up and move to Hawaii every time I hear it. It's pure bittersweet joy.

Favourite/First 7": When I was about 12 I bought my very first 7" from Tower Records in London for 50p in the sale box. It was tatty and sleeveless but something about it caught my eye. I took it home and studied the label - it turned out it was by a band called Milky Wimpshake, and delving into their own record label Slampt, and related bands, unearthed artists like Kenickie, The Yummy Fur, Bis, Pussycat Trash, Bikini Kill and Fugazi, who all led on to other artists. It was the nearest I've ever had to a notable 'gateway record', and opened my eyes to an entirely new world of music and art. I'm forever grateful.

Favourite B-Side: I would like to recommend the b-side 'Romantic' by Neurox that was on the 'A Raving Night' 7" from 1984.

Favourite B-Side: 'Wives of Farmers' by Grandaddy is one of our all-time favorite b-sides.

Favourite/First 7": I'm sorry to admit that I never really listened to 7"s until we released one of our own. For this reason, 7"s have a different sort of value to me. They are traded like currency between ourselves, other bands, and record labels. Sometimes a 7" will represent an entire tour full of memories, or a band we only met once but fell in love with. One of our most recently acquired and beloved 7"s is The Twerps 'Good Advice Little Guys'.

Josh Graham (A Storm Of Light)

Favourite B-Side: XTC, 'Dear God' obviously not that rare but an amazing song with poignant lyrics. Originally release on the Grass 7".

Favourite/First 7": I remember not buying, but listening to the Neurosis Aberration 7" right after it came out. My high school bandmate had traded it from a friend of ours. We'd never heard anything like that. It was a day that opened our minds a bit further than they'd been opened before.

Favourite B-Side: Both of us whole heartedly recommend the Elevation 7" by Orior on Crystal Groove Records from 1979, both tracks on the B-side, Tutankhamen and Quiet Sky are unbelievable for the time, and we stole the track title Quiet Sky for one of our own pieces on our Tryptych CD release.

Favourite/First 7": We wanted to go record shopping in Zurich, just looking for a very rare 7" by George Gruntz and Rolf Liebermann called L'echanges, which is a jazz composition, backed by the same symphony played by 156 machines, we had one hour to look for it, and the first shop we went in had 2 copies in great condition, and for a great price.

Favourite B-Side: 'Memories', the b-side of 'I'm a Believer' by Robert Wyatt, really beautiful song written by Hugh Hopper which originally appeared on 'Banana Moon' by Daevid Allen. I was amazed to just recently discover that Whitney Houston covered this on a recording also featuring Archie Shepp.

Favourite/First 7": I remember buying 'Boys Keep Swinging' by the Associates in Bruce's Record Shop in Edinburgh, I hadn't heard it and I only knew about it because I once played in a band with Alan Rankine. I didn't think much of it but I did have the feeling that they would be a band worth following. I was pleasantly surprised when it subsequently became a bit of a collector's item.

Favourite B-Side: I loved Mule, PW Long's old band on Quarterstick, and one of their 7"s had an astounding cover of the Bee Gees' 'To Love Somebody' that I still play loud as fuck today.

Favourite/First 7": I'm not sure if this is true, but in my mind the first 7" I ever bought was the 1982 Scottish World Cup Squad's 'We Have A Dream'. I think I was probably more into the fact it had Gregory from Gregory's Girl on it though, although I quite enjoyed the football too. The B-side was 'Wrap Up The Cup', a CLASSIC.

Favourite B-Side: 'Don't Let Me Down' by The Beatles, b-side to the 'Get Back' single.. featuring Billy Preston on keys. Also performed on a rooftop in the Let It Be film. Crazy that Phil Spector left this track off the album.

Favourite/First 7": First 7" was given to me by my grandmother. The Rolling Stones, "Paint it Black" b/w "Stupid Girl", original London Records pressing. The record has been played so many times, the needle will barely sit still.

Favourite/First 7": Best/coolest 7" record experience would definitely be when were asked by Jason Paige, after having only seen our first or second gig, if we wanted to record a 7" for his label, Dirge Records.

Favourite B-Side: I suppose the flip side to Queen's "We Will Rock You," WE ARE THE CHAMPIONS.....

Favourite B-Side: The song 'Even In His Youth' which was the b-side on Nirvana's Teen Spirit single is a really great tune. There's no such thing as a truly "deep cut" with that band, since everything they ever fucking did went triple platinum or whatever, but I think there are still a few people out there who haven't looked under the cats nose.

Favourite B-Side: Flipper 'Love Canal'. All the kids love to sing and dance along to "Ha Ha Ha", but it's during the b-side "Love Canal" that the chemicals really kick in.

Favourite/First 7": Rock 'n' Roll was banished from my house, not due to religious reasons, but because it was considered shitty music by my parents. At age 9 I bought my first single. I had to sneak it into the house and hide it in the bottom of a drawer. I only played it whenever I was alone; looking out the window waiting for my parents to pull up the driveway so I could stash it before they walked through the door. It's amazing to me in now that a record as wholesome as "Yo-Yo" by The Osmonds began my decent into a life of deception and lies.

Favourite B-Side: Siekiera 'Misiowie Puszyci'. Fantastic b-side. Both Luis and I are fans of this one. The outro is particularly interesting.

Favourite/First 7": Total Control 'Paranoid Video' 7". Great track. I recently picked it up at their show in SF.

Favourite/First 7": When I was tiny my parents gave both me and my brother a 7" single each. I was given 'You're In The Army Now" by Status Quo and my brother was given 'Popcorn' (i don't think it was the Gershon Kingsley version, must have been Hot Butter). Turns out that my brother became the fitness freak intent on joining the armed services and I became the synth music guy. Go figure.

Favourite B-Side: I really love 'Winterlong' by the Pixies, its a Neil Young cover, but I prefer this version. I found it quite inspirational when I heard it. The vocals flow together so smoothly, and the whole song sounds perfectly untidy. I discovered it when I bought their b-sides album, it just summarises why I fell in love with that band and why they were such a big part of my life.