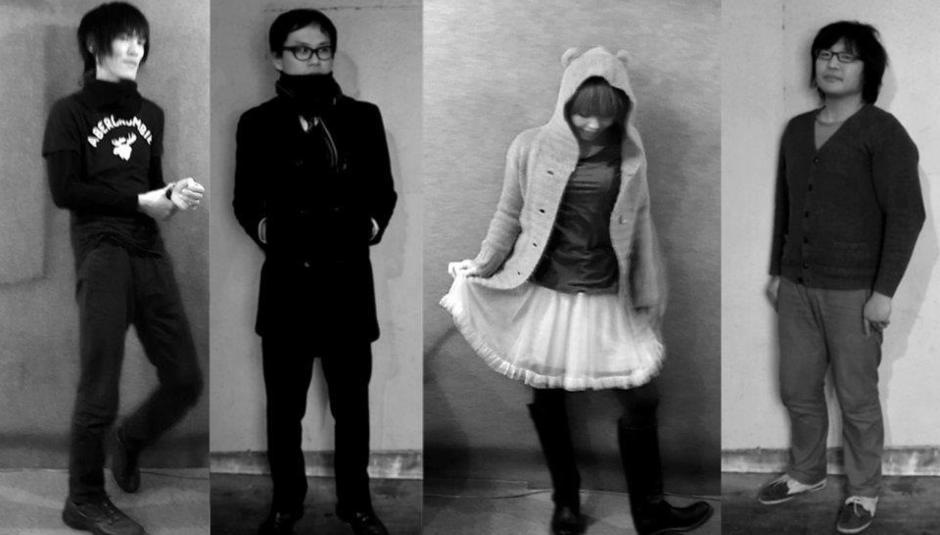 "A lot of Japanese bands seem to be obsessed with being the new Beatles or Nirvana": DiS meets Taffy

"A lot of Japanese bands seem to be obsessed with being the new Beatles or Nirvana": DiS meets Taffy

Tokyo based four-piece Taffy are something of a unique entity in being possibly the only Japanese band this past ten years to stir up any kind of interest in western territories. As sad a state of affairs as that may be, considering the wealth of talent that does exist in that part of the world, the main component of Taffy's sound that sets them apart is their seemingly unparalleled love affair with British underground pop. Pitching themselves somewhere between the hard candy of The Primitives, wistful experimentalism perfected by the Boo Radleys and elegant new wave of Echobelly and Elastica, Taffy's sophisticated blend of sweet and sour guitar orientated pop has attracted a spate of attention, particularly from the UK.

First to the post were London's Club AC30, who promptly signed them to their label late last year. Fast forward six months and debut LP Caramel Sunset is about to hit the shops in a matter of weeks, preceded by limited edition lead single 'So Long' on Record Store Day. Comprised of Iris (vocals/guitars), Koichin (bass), Asano (guitars) and Kensuke (drums), Taffy aren't exactly new kids on the block as it were. Iris and Koichin having initially formed their first band Salt Water Taffy several years prior, the line-up never really settling or taking shape until the more recent arrival of Asano and Kensuke and subsequent shortening of the band's name (Taffy is a type of sweet or candy for anyone still unsure as to the origin of their moniker).

Having watched them play a sold out show at Tokyo's Super Deluxe as part of their album launch, DiS finds itself sat backstage with the amiable foursome not taking things for granted. While they have every reason to be pleased with themselves, singer Iris in particular is critical of her own performance. Iris being the only fluent English speaking member of the band, manager Hiroaki Hayashi sits in as translator for the other three.

DiS: Do you see tonight's show as being an important turning point for the band?

Iris: I think it was one of the most special shows we've ever done. It's certainly one of the biggest crowds we've played to in a while. Thanks for coming! When we heard you English guys were gonna be here we decided to play a cover of The Cure song 'Boys Don't Cry'. Its probably quite strange to a lot of people here because although this was our release party, it's coming out here exactly the same time as the UK. Then again, in Japan we're not really seen as part of "the scene" so we weren't sure whether anyone would come!

DiS: Really? The audience seemed very enthusiastic and judging by the reaction to a lot of the songs, seemed quite familiar with most of your set.

Iris: Yeah, it was nice to see such a great response. Surprising, but nice!

DiS: You mentioned not being part of the scene. What do you make of the current Japanese music scene in general?

Hiroaki: We've never been involved with the scene.
Iris: There are a lot of guitar bands around Shibuya, but a lot of them seem to just cover other people's songs or sound like one another. I don't think there's anyone else around here that plays how we play, so whenever we do play live with most of them they tend to treat us differently.

DiS: Why do you think they treat you differently?

Iris: We often wonder why that happens too! I think one of the reasons is because I sing in English and that makes it sound too British, too boring to them. At the same time, we don't quite understand what they do either. I guess we must be doing something right if tonight is anything to go by. I mean, they were all dancing, all smiling, and all happy, so I don't know why people in other Japanese bands don't like us.

DiS: Some people have labelled you as a shoegaze band, which seems a little wide of the mark considering your sound contains such a wide range of influences.

Iris: We didn't intend to be recognised as a shoegaze band, although there are some obvious parts in the songs that come from that whole scene. We don't really intend to be anything, we just do our own thing.
Hiroaki: We like lots of music. None of us listen to the same thing except maybe The Beatles. Koichin listens to music from cartoons, Ken likes sixties pop. There's a good mix between all of us.

DiS: You've also been compared to some of the early Britpop bands of the 1990s like Elastica and Echobelly. Do you think they're a more accurate comparison?

Iris: I've never listened to any of those bands. One of the reasons I won't listen to them is that if we do sound like them, I don't really want to find out that we sound like them! I didn't intend it to be like that. I don't listen to certain types of music because I don't want to get into it too much. What I mean by that is I wouldn't want a particular sound to take over our music. A lot of Japanese bands seem to be obsessed with just being the new Beatles or new Nirvana or whatever. Whereas that's something we've never really thought about.

DiS: Going back to the release of your album, Caramel Sunset. You've taken a different approach to many Japanese bands by releasing it over here and in the UK at the same time. Do you consider the UK market to be more appreciative of and compatible with Taffy's music than back here in Japan?

Iris: Yes, definitely.
Hiroaki: I wouldn't say it's calculated or anything, but the response we've had from UK blogs and sections of the music press over there compared to back home suggests our sound has more in common with that audience for a start.
Iris: Even when we first became involved with Club AC30 and played our first UK show before Christmas last year, the reaction we got from the audience was extraordinary.

DiS: You're currently signed to Club AC30 in the UK. What made you choose them over other labels?

Iris: I knew of their existence from when their bands had toured over here in the past.
Hiroaki: I think the main reason is that Robin (Allport) and Duncan (Jones) are just so passionate about music in general. They don't just sign bands to make a profit, they sign bands whose music they genuinely like. They champion their bands and seem to have created this extended family of bands around them. When they expressed an interest in working with Taffy it seemed logical to go with them. Going back to that show at the Buffalo Bar in December, it was only a last minute thing where we got added to the bill. There was no pre-promotion, none of our songs were available in the UK, nothing, yet because of the interest generated by the label we had people screaming for an encore at the end of our set. It was such an exciting experience to feel part of such an enthusiastic set up.

DiS: I hear that you guys paid your own airfares and transport costs just to play that show. Was it quite a daunting challenge at first?

Hiroaki: I wouldn't say it was daunting. We were just honoured to be invited onto the bill, and because it was so unexpected we had to make sure we played the show whatever the cost.

DiS: One thing that struck me about tonight's show was the rapport you had with the audience. Is this something you consider to be an important part of playing live?

Iris: You know what, I don't normally say that much in between songs when we play live. Today, we had to change guitars a couple of times so I had to talk, but usually the most I'd say is "Hi!" or "Thankyou!"
Hiroaki: If you go to most Japanese indie gigs the bands do tend to talk between songs.
Iris: There are some bands that spend half of their set talking but for us we're like, "What's the point in talking? We came to play music!"

DiS: There seems to be a level of interest from the media in what you guys are up to. Do you think it is important for a Japanese band to have a fairly prominent media profile in order to succeed outside of your homeland?

Iris: I think times have changed so much over the past few years. There are so many tools to help our music reach out to other people. I think it's great that there is a lot of interest from the music press, particularly in the west, but we don't place too much emphasis on it either.
Hiroaki: In a way it's kind of irrelevant. If the songs aren't good enough then that's something we have to change not the media. What is important is that more people get to hear our music first hand and hopefully make a judgment based on that listening experience rather than someone else's opinion.

DiS: Why do you think there hasn't been much attention from the UK and Europe on Japan's music scene before now?

Hiroaki: I think it goes back to what we were saying earlier about many Japanese bands not taking risks and only singing in Japanese. It's become something of a stereotype. You know, that's what Japanese bands do; only play music for Japanese people. The only other band that seem to be trying something different at present are Sugardrop.

DiS: You played several new songs tonight that have yet to be released and aren't on Caramel Sunset. Does that mean the follow-up is already well on the way to being completed?

Iris: What usually happens is we're continually writing new songs, and then when we get to the stage where five or six are finished we'll start the recording process. I guess then we'll be ready to think about making another album! We haven't set a deadline to release the next record but hopefully it will be ready to go in the early part of next year.

DiS: Will there be any festival dates this summer and are you going to be touring the album later in the year?

Iris: I hope so!
Hiroaki: I guess a lot depends on how well Caramel Sunset does. If people like the record then hopefully we can play some shows off the back of it.

DiS: What are your hopes and expectations regarding Taffy for the foreseeable future?

Hiroaki: To become better at everything we do, not only as far as the recordings are concerned but also as a live band...
Iris: ...then hopefully more people will listen to our music, not only here or in the UK but wherever. I wish I could reach out to them!

The album Caramel Sunset is out on Monday 7th May.

A UK tour is planned for late October, full dates to be announced.