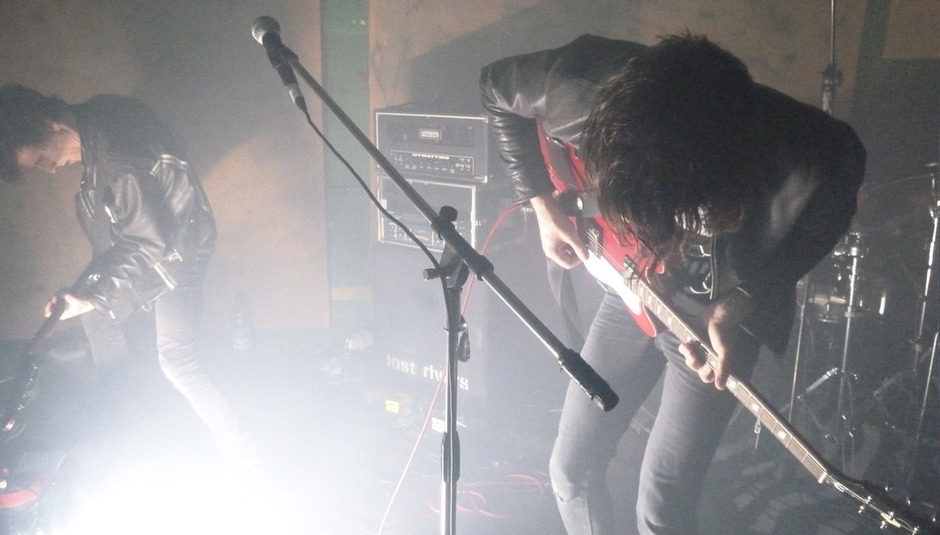 The Stuttgart town of Baden-Wurttemberg isn't exactly renowned for its musical heritage. Situated at the heart of the German motor industry, its reputation as a haven for tourists firmly established, its cultural template as far as the arts are concerned barely stretching beyond theatre and the opera. Until now.

Meet its one and only exports of visceral noise rock, The Lost Rivers. Their long awaited first album Sin & Lostness hit the shops this week, having scored an impressive 9/10 on this very site. The three-piece of Phil Wolkendorf (guitars, vocals), sister Izzy (drums) and Hell Pilot (bass) - or Hans Peter to his parents - have unleashed one of the most aggressively constructed debuts in recent years, mixing elements of the blueprint created by The Jesus & Mary Chain and continued by A Place To Bury Strangers with something more confrontational in its most darkest sense altogether.

Having spent the past few weeks driving around Europe in support of Sin & Lostness, DiS managed to catch up with them post-soundcheck at Brixton's Windmill, also the final night of the tour. Soon their acerbic brand of shoegaze inspired white noise will send tremors through the venue's foundations - literally. First though, there's the small matter of trying to avoid an oversized German Shepherd salivating down the side of the Windmill's roof, on which he's perched above our heads...

DiS: I guess it's best to start from the beginning. Where did The Lost Rovers originate from?

Phil: We started off as a punk rock band, but after a while it soon became clear that the kind of music we liked - loud, crazy fucked up noise - went way beyond the basic sound of punk. I guess the idea of being in a band came from watching rock stars on TV when we were kids. I started playing guitar and writing songs and Izzy learned to play the drums. I'd been in a couple of other bands and then we decided to form one of our own around five years ago. I asked Hans (Hell Pilot) if he wanted to join a punk rock band and that's how it began.

DiS: What were the songs like back then? Did any of them make it to the recording stage?

Phil: Very 1977-era punk rock.
Izzy: We love The Dead Boys, Sex Pistols, most of the bands from the first wave of punk.
Phil: Our roots will always be in punk rock, and then I kind of stumbled across The Jesus & Mary Chain by accident really. I listened to Psychocandy and it changed my life. From that I discovered My Bloody Valentine and all of those wall of sound type bands. I think that is the future of guitar music and pretty much sums up why we're all in a band. I still think there are many elements of punk rock in this band; the energy for example, but at the same time we like to create this huge sound. When I listen to many of those bands you can hear their influences were also obviously punk rock in the beginning and then over time they've completely developed into something else. That's how I see The Lost Rivers.

DiS: While most comparisons have been with the bands you mentioned and also A Place To Bury Strangers, I think there's a lot more density to your sound in a similar way to bands like Main, Godflesh or even Nine Inch Nails for example.

Phil: Wow! Nine Inch Nails is a massive compliment. We try to push ourselves when we're making music, especially live. We use a lot of different effects pedals; on the guitars, on the vocals, on the bass, even on Izzy's drums. There's only three of us, so for it to sound the way it does we like to enhance it in every way we can.

DiS: Do you prefer playing live to being in a recording studio?

Izzy: I much prefer playing live.
Phil: Honestly? I like both. It's always great being able to experiment with new ideas and effects in the studio, but then the best place to be able to try them out is in front of a live audience. I hate playing to no one, purely because it's boring. We do this to play live. We're not a band that just wants to lock ourselves away in a studio.

DiS: There are several other dimensions to your sound as well as the noise element. 'New Light' for example is based around the motorik beat that originates from a lot of experimental German bands of the 1970s like Neu! and Can. Do you see yourselves as being the next natural progression from krautrock in a perverse kind of way?

Phil: It's funny you say that because people have compared us to Kraftwerk and Neu!, and we do listen to them but they're not our favourite bands. Not at all. Our drum sound is totally influenced by The Jesus & Mary Chain. I like minimalistic drums but with the bass operating as a wall of sound, almost as if we're combining both.

DiS: Baden-Wurttemberg has no musical history as far as pop or rock music is concerned. Is there much of an underground scene in the town?

Izzy: What scene!
Phil: No, there's nothing other than awful techno. That's why they think we're crazy back home!

DiS: I read in a previous interview when asked why the band started you claimed it was due to boredom. Is that true?

Phil: Yeah, definitely. We've always been into music, but there aren't many cool bands that stop off and play in Baden-Wurttemberg simply because there is no music scene there. If we want to see any cool bands we have to travel to Munich or Berlin or Hamburg, which can be anywhere between a three or four hours drive. I guess that's one of the reasons why we play the type of music we do, so we can hear our favourite kind of music without having to travel! Baden-Wurttemberg's a really beautiful place, but it's also very, very boring. Stuttgart has its R & B and hip hop scene, and everywhere else around us is just techno.

DiS: It's the last night of the tour. How have the shows been so far, both from your point of view and from the way you've been received by different audiences?

Phil: They've been great. The first part of the tour where we were playing with Ceremony was amazing, and looking back over the last fourteen days it has been a fantastic experience playing to so many people. Returning to venues we'd first played a year ago when no one turned up and having 150 people queuing round the block is mindblowing. It's the same here. I mean, this will only be our second ever UK show yet the turnout is incredible. I'm overwhelmed so many people in England have even heard of our band, let alone actually want to come and see us play.

DiS: Has it been difficult to finance the tour?

Phil: Yeah, it has. I have a day job when I'm not on the road. I work in an office back home. We've all had to save up to be able to make this happen. We're careful about the shows we book and the promoters we play for. It's not just about the money but obviously we always try and get something off the promoters, even if it's only our expenses covered. We have a really good manager in Sandra Rech who will only organise shows where we at least get enough money to pay for gas.

DiS: A lot of the lyrics on Sin & Lostness seem quite dark and desolate, many with a common theme of death running through them.

Phil: You're right, I do tend to write from a pretty dark place. Most of the lyrics are about dealing with two opposites of life; good versus evil, love versus hate, good feelings bad feelings. Just duality in that it's something I find everywhere. Life and death. Everything is mixed up in this duality of life. Phobia and anti-fear. It's like the album's title, Sin & Lostness. They're what interest me in people's relationships for example. 'Your Looks' is primarily about how a relationship can change between two people overnight from one direction to the total opposite. It's never just "alright", you know. 'Death Drive' is another example. When you first listen to the lyrics it seems to be about someone who's just driving a car, and they want to crash so they end up dying. It's quite suicidal on the one hand, but on the other there's a lot more questions that the subject asks themselves. Is this your last chance to prove you're not losing your mind? Is this the last chance to get the control back by killing yourself? It's almost like the song is saying that you have to totally lose control in order to regain control.

DiS: You've produced all of the records yourselves so far. Is it something you see yourselves doing for the foreseeable future not only with The Lost Rivers, but also other artists as well?

Phil: Yeah, sure. I'd love to work with other bands. The reason we started producing our own stuff was because we didn't like what other people did to our work. We are control freaks. We had someone who worked on our stuff a while ago and it didn't sound right, so it ended up somewhere on the shelf. We never listened to it again, and that's why it makes sense for us to produce ourselves. There's nothing more frustrating than recording a song only for someone else to destroy it with their production. It's difficult explaining to producers what we want. We want it crazy and loud, not some guy telling us it maybe sounds better another way. It doesn't matter, that's how we like it. We had one guy who said he wouldn't put his name to something that was so loud, and we're like, "Great, we don't want your name on it!"

DiS: Are there any producers or engineers that you would like to work with in the future?

Phil: Yeah, I really like the Rude 66 remix of 'Death Of Eve'. We met him when we played in Amsterdam a couple of days ago. He's a cool guy. We've been talking with him about doing some stuff together.

DiS: What are your plans for the rest of the year? Are you doing any festivals this summer and will you be returning to the UK before the year's out?

Phil: If England wants us then maybe! We're going into the studio when we get home. We have some new songs that we want to record. I sang on a track for Teenage Sin Taste, who's this really awesome solo artist from Valence in France, so I'm hoping to do something with him again soon. We have some shows coming up later in the year with Ceremony and Screen Vinyl Image; November I think.

DiS: Finally, how would you describe the band's sound in five words?

There Are No Innocent Bystanders (or ...