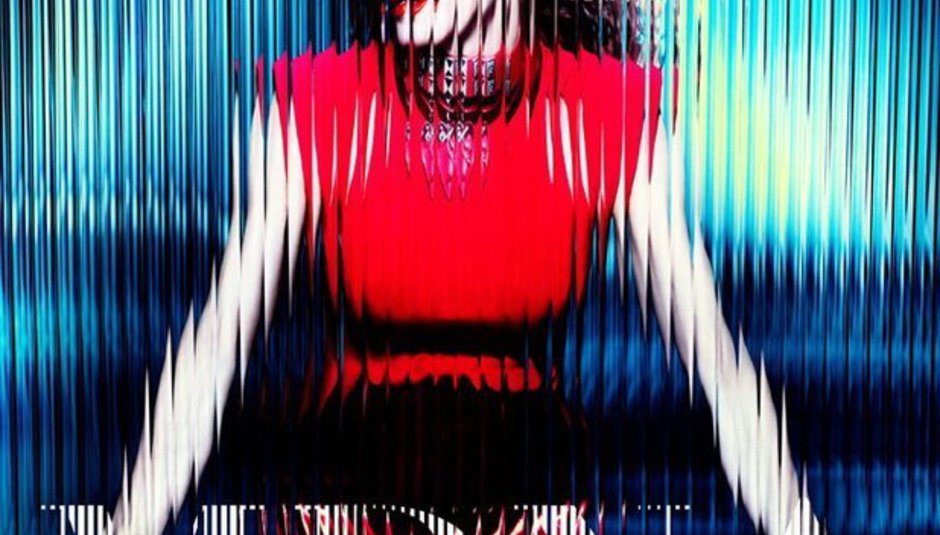 "I've been to a couple of playbacks," comments one journalist after hearing Madonna's MDNA in full for the first time. "The louder they play the album, the more worried the record label tend to be about it."

'How loud was this particular listening session in the bowels of Abbey Road?', you ask. In a word, earsplitting.

For those of you unfamiliar with the story of MDNA so far, this is Madge's 12th solo album in total, her first for Universal and it has spawned her lowest ever charting debut single in 'Give Me All Your Luvin''. Its follow-up 'Girl Gone Wild' has hasn't been rapturously received either, so there's a fair bit riding on this swanky event attended by pretty much every major media outlet in the country... and your humble reporter. Despite the obvious temptation to declare a phenomenal comeback after the disappointing Hard Candy or a continuation of that muddled slump, what follows is a guide to where the album is at. Not how good it is.

Opinions need time to fester and we wouldn't want to embarrass ourselves 12 months later for the sake of some easy hyperbole. This is simply our account of what happened when a 53-year-old singer's latest dance-pop record, primarily aimed at a market of teenage Radio 1 listeners, was played to a room of music critics in their early thirties.

The album's second single, revealed via a cringey lyric video, sets the mould for MDNA. That mould being a whole lot of synth and some frivolous good time lyrics. A modern on twist on the old school fun of 'Holiday' and 'Open Your Heart'.

Produced by Benny Benassi, 'I'm Addicted' is the track from which MDNA gets its name. You can pick this up quite easily because Madge takes to chanting her album's title repeatedly over some squelching electronic vibrations. A song with an irresistible chorus which comes pretty close to an instant favourite.

4) Turn Up The Radio

So far the Material Girl she hasn't pulled any punches in pushing for a club-friendly audience but 'Turn Up The Radio' feels more like one for the oldies. That is, the theatrics are toned down a bit in favour of a whopping chorus which goes something like this, "Turn up the the radio, turn up the radio. Don't ask me where I wanna go, we've gotta turn up the radio." Big but in no way clever.

For all its flaws, it's easy to see why 'Give Me All Your Luvin'' was selected as the lead single for MDNA. A likeable song with the guest vocals from two critically claimed and commercially successful rappers could have spelt chart gold. If only the whole affair didn't seem so half-hearted.

The first of five William Orbit tracks on the album, this is a disappointment for those expecting the blissed out vibes of Ray Of Light. These come a little later, so for now it's another slightly tired banger which goes heavy on the vocoder while pushing the vocals right to the back of the mix. Seems to be trying too hard to impress but will hopefully even out on repeated listens.

Not the first song to see Madonna name check Marlon Brando, this is decent enough mid-album album fare. "Ooh la la, you’re a superstar” goes the idiosyncratic chorus and we bob our head along obligingly. As another bassy wobble reigns in, the album is beginning to feel like a more refined version of Britney's Femme Fatale. We liked Femme Fatale, a lot.

Just when we were getting worried MDNA was too light on personality 'I Don't Gives A' arrives to allay our fears with lashings of brash sentiment. Tabloid hacks will no doubt have a field day with Guy Ritchie referencing lines like, “I tried to be a good girl. I tried to be your wife". The real scene stealer comes at the end of the track however, with Nicki Minaj proclaiming, "There’s only one Queen and that’s Madonna. Bitch!" On this form, it's hard to disagree with the 'Stupid Hoe' chanteuse.

Featuring a banjo-lead intro and a proper (auto-tune assisted) key change, 'Love Spent' is a silly little romp which we were rather fond of. Much like Confessions On A Dance Floor there's no real message to MDNA, just a series of four-to-the-floor tracks and more reflective numbers like this one.

The album's penultimate offering and its only straight up ballad, 'Masterpiece' is overwrought but underwhelming. Admittedly Madge isn't famed for her cracking pipes yet a sudden reach for the high notes would do well to distract from a humdrum acoustic backing track. It's no 'Crazy For You' that's for sure.

A complete contrast to the opening synthetics of 'Girl Gone Wild', 'Falling Free' is a sombre and string-drenched affair. After an avalanche of opening dramatics, it's pleasing to hear MDNA end on a reflective note. "We're both free, free to go," coos the world's best-selling female artist of all time.

In truth, we would leave but there's the small matter of some bonus tracks to skip through. Of this ramshackle bunch 'Beautfiful Killer' and 'I Fucked Up' reward our perseverance but 'B-Day Song' and 'Best Friend' feel a bit kitsch on first impressions at least.

Madonna has stepped back into the pop fray with a something for everyone. The first Demolition Crew and Benny Benasssi-produced half of MDNA sees her try and play to a synth-hungry 21st century audience. The second returns to the comforting fold of William Orbit's mellow ambient bliss.

What we'll be grappling with as we get down to our review is whether the record hangs to together well enough as a whole. In the opulent surroundings of a free bar and several bowls full of jelly beans, it's easy to get carried away with your own enthusiasm. Still, we arrived at Abbey Road with no little trepidation and left reassured that Madge hasn't succumbed to Top 40 drudgery yet. That will do for the meantime.

In Photos: DiS Presents A Hawk and a ...