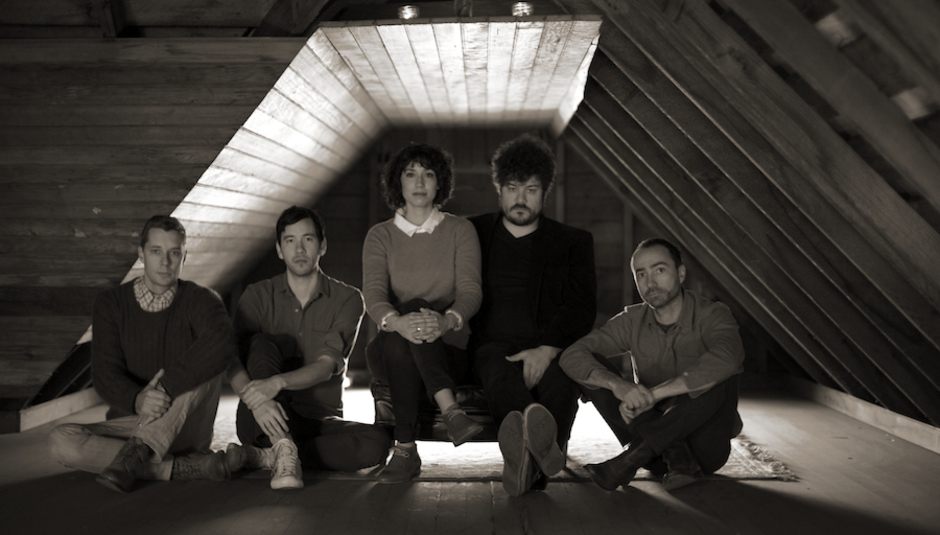 Since the promotion for the release of Wincing the Night Away ended, James Mercer took some time out to have kids with his wife. He also found the time to form Broken Bells with Danger Mouse and to act in a film. While he was doing all this, he disbanded his bunch of merry men who performed under the name of The Shins. I say 'merry' because with stories of one of the band beating up his girlfriend, all perhaps wasn't as glorious in Camp Shins as it seemed.

If you're really interested in the departures, read this but for the most part - in my mind at least - James Mercer is The Shins. After he wrote and recorded his/their new record Port of Morrow (which is streaming in full, here), he put together a new band to head out on the road with him. But who are these strangers lurking in the stage lights? We sent them each a questionnaire to answer one single question: Who are ya?

Yuuki Matthews. Bass Guitar/Keyboards/Vocals. I've lived in Seattle for the last 17 years but I grew up in Burbank, CA.

I've played in and recorded with many bands, most notably Pedro the Lion, Crystal Skulls, Richard Swift, and Sufjan Stevens.

Late blooming, tall, half Asian musician guy and his cats in a life long quest to move the California sun to Seattle.

My childhood was made more awesome because this song was a part of it. That rising synth line!! Still my favorite thing to hear in the summer.......time.

This music was a complete mystery to me when it came out. Hip Hop beats with no rapping over it? All samples? It's common place nowadays but to me this record is a masterclass in beat making. A classic.

I'm realizing that a lot of the music that informs what I do now all came out in the late 90s. I remember hearing this song for the first time in my friend Peter's bedroom. We were 16 years old and it set the bar for all other music for quite some time.

TNT was the first Tortoise track I ever heard. The drumming and simple yet thoughtful melodic lines really opened my mind to new possibilities in music making. One of my favorite bands. Soon after hearing this track I quickly grabbed anything I could find on Thrill Jockey. Highly influential.

This might be my favorite song period. I first heard it in the films of Wong Kar Wai and have since become a big Cugat fan. His arrangements are perfect.

He loves a good iceberg wedge with bleu cheese.

Joe Plummer, I play drums and percussion. I now hail from seattle. I had to move because portlandia was ridiculing my every move. I am also recently married.

I've mostly played in various rock bands (modest mouse, mister heavenly the black heart procession, magic magicians, replikants etc). I have done a few artier things with the henry art gallery and stanely zappa (years ago). I record loads of my own music that is a version of linear, dub, soundtrack/soundscape music. Though rock music is my bread and butter, I'm currently getting interested in the artier/performance/soundtrack type of situation. Ultimately, I love it all.

"Growing up on the west coast, Joe learned how to play through punk rock and skateboarding. He wound up in the northwest just in time for nirvana to replace his black flag. He practiced drums, played shows and studied psychology and ethomusicology through out the 90's. He chose rock over graduate school. Wound up touring and recording with a bunch of interesting bands through the 00's and is happy to continue his journey with the Shins."

With great difficulty, I have to limit to 7 songs. Here they are, in no particular order:

The ultimate rock BAND, both live and in the studio, you can debate it all you want, but each and every members' input was crucial. This is what bands should look to for in all inclusive magic.

Same can be said in the band dept. More importantly, these guys changed the definition of punk for me. Punk is in your instrument AND your heart.

You can feel Jah Thomas moving the faders. The art and performance of dub is in the live mix, and you can take it anywhere on the controls. Sonic space beauty.

My introduction to experimental/punk art music. Led by a drummer. Though artsy and jagged, Charles somehow always got a hook in there. Influential in my own music the same way PIL is.

Some of my favorite pop guitar playing. Simple single string hooks and well thought out sound. I love that guitar sound. Opened my ears to guitar playing.

This is the REAL heavy to me. Part black sabbath, part punk. Led me to a vast world of heavy music, both previous and post. I swear some of the seminal NW bands (Melvins et all) listended to this black flag, not the early stuff.

My current favorite soundtrack. I love the theme, but more importantly I love the thread of the theme throughout the film. At times, it seems to reference itself, which brings you deeper into the film. Perfect music to film relationship.

Recently I've learned that James has an equal fondness for both his Les Paul Junior (I believe that's what it is) and his Guild Starfire. Possibly troubling to him. He also has a peculiar particularity in song production that most often translates into an interesting, irresistible piece of music. James likes to work. He likes to create things, finish them and move on. He does not rest on his laurels. This is the main reason I enjoy working with him. If we're breathing, we should be making something.

I use to be called "Brian Setzer" Shhhhhh!

Oh Boy! - Lou Diamond Phillips - this blows every other version away!

Beyond Belief - Petra - WOW! these guys are sooooo cool. check out that keyboardist! True talent!

The Bad Touch - Bloodhound Gang - proof that the cream rises to the top. Always. Scientific Fact.

1. What's your name, instrument and where do you 'hail' from...? Jessica Dobson. Electric guitar , Seattle WA

I currently play in my own band Deep Sea Diver and I have played with Beck and the Yeah Yeah Yeahs in the past.

It would probably resemble the plot to Dumb and Dumber. I try not to not take myself too seriously.

I was 12 years old when Romeo and Juliet came out and this song was in the movie. I would go into the middle of the field at my middle school during lunch hour and listen to this on repeat. I think I even wrote the lyrics on my binder.

The solo on this song is the strangest, squirmiest , most reptile like sound I have ever heard. It rules.

It's impossible to remain in a bad mood if you're listening to this.

She's not so sweet anymore, but in her prime she was the the shit! Nobody sang like Mariah.

This song makes you feel way cooler than you actually are.

James geeks out on guitars pedals with me. He has some serious chorus / delay pedals that sound straight off of a Smiths record. We both are pretty influenced by Johnny Marr as well.

The Shins new album Port of Morrow is out now. They play two sold out shows in London tonight and tomorrow, and return in August for Reading & Leeds.