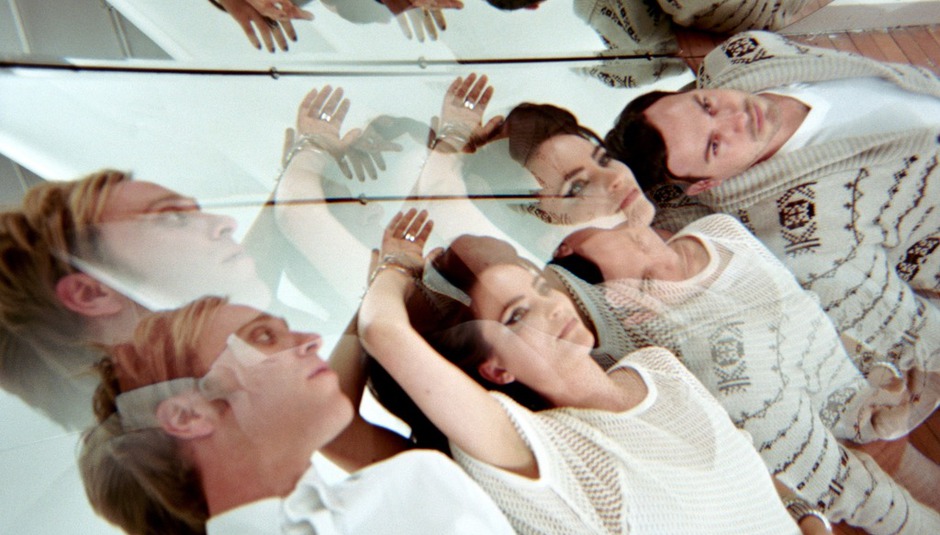 Blouse have emerged into a world in which the minutiae of life is blogged, micro-blogged and tweeted and re-tweeted to within an inch of its very existence. We’re one step away from a standard recording contract clause stating that band members must be fitted with tracking devices, so that we can follow their every move. Yet, somehow, Blouse have managed to evade the all-seeing eye of the internet. There are a couple of prominent interviews from around the time the eponymous album was released and they’ve half-subscribed to the notion that they should maybe use their Twitter account every now and then. It’s not that they’re trying to be mysterious though; Blouse are a band on tour, busy catching up with their own progress.

Talking to the band ahead of their Leeds gig, at Brudenell Social Club, I explain that there’s a degree of suspicion around their existence and the lack of information available on the band; that before they’ve even begun, there are cynics poised, arms aloft, ready to tag them with the ‘Deliberately Evasive Hipsters’ Post-it note. I ask if it’s something that bothers them...

Charlie (vocals, guitar): “Hmmm, yeah – it’s just a product of us not actually being around for that long. It doesn’t bother me really, I’ve never felt too bothered by it but we would like to try and prove that we’re not trying to hide and we’re not trying to be too cool.”

Patrick (bass): “It’s really interesting because I was working with Reuben from Unknown Mortal Orchestra at the time and that was something that he sort of celebrated, was the evasiveness and I remember thinking about it and just never really thinking about that approach to music before – this sort of like veil which means that nobody knows, which makes you more intriguing. I don’t know that it was part of our plan to be like that and even though it wasn’t part of our plan, this local paper in Portland wrote this piece, like ‘Who Is Blouse’? I think we just didn’t have a lot of stuff. We didn’t have that much to put out there yet. It all happened so quickly that we’ve all just been catching up.”

Charlie: “It’s kinda cool in a way because there’s so much on the internet now about every band it’s crazy – it’s almost nice for it just to be about the music for a little while. Because that’s how it felt, I mean, there really wasn’t anything about us. You didn’t know what we looked like, who we were, where we were from.”

And it really did happen quickly for Blouse; a case of getting signed before they’d even met, almost. Captured Tracks signed the band before they had played a gig and Charlie explains: “They heard some demos and they said we normally wanna see a band live first but we just wanna sign you guys and I remember, I was going into a movie, and my heart was going… and I remember being so distracted during the movie because I was so excited.” She doesn’t remember what the movie was. Patrick suggests it was “something arty.” Paul reckons it was Transformers 3. She goes on, ignoring the jokes. “And then there was a lull really because we had never played a show we had only been a band a few months. For a minute I wasn’t sure we were ready for it, it we worked quite hard. “

This reverted timeline leads me to suggest it must have been hard for Blouse to form their own identity; something with which the founding and core members of the band, Charlie and Patrick agree. Charlie seems to regret missing out on the formative, rites of passage moments that almost every band goes through “we never really had a chance to just, like, play silly little shows, in the corner of a bar with, like, eight people.”

When I inform her that a million bands will be queuing up with sharpened claws, ready to strangle them out of jealousy, she adds “I know but sometimes you need that to figure things out a little.” She’s right, of course, but it won’t end the jealousy. “Our first show was opening for Starfucker and that was sold out in Portland – it’s a pretty small venue but it’s a pretty good venue and we had never, um, I mean… we would continue to open for really good bands and we never really… every show felt like such a big show. It took us a little while to feel comfortable with ourselves and how to not sort of try to live up to something.”

Onstage that night, Blouse looked comfortable in their own skin, though a little perturbed at the scene that confronted them. Their live sound was crisper than I’d expected it to sound; each component was crystallised – they had already praised the talents of the Brudenell’s sound guy, Trev, who was obsessing over Patrick’s bass sound – and sounded more confident than I had anticipated. As they came offstage, though, they joked “did you enjoy our cabaret set?” referring to the fact that the undeservedly dampened mood in the room had caused most of the crowd to remain in their seats for the duration of the show. It had snowed heavily in Leeds that night. Taxi drivers had given up the ghost, buses too. Those in cars feared the safety of the trip home. A few days later, Charlie tells me “Leeds was our strangest show.”

As an onlooker, though, Blouse’s songs seem perfectly suited for that uncomfortable environment; unable to lose yourself in the atmosphere generated by a lively and enthusiastic crowd, you become hyper-aware of the songs and the emotions they represent. Speaking to Charlie about her song writing process, I tell her I’m fascinated by her admission in a recent interview that she doesn’t have a strong sense of memory, but that she remembers emotions, moods, feelings, rather than facts, dates, etc etc. Whether it’s a conscious process or not, that encapsulates what happens when you listen to a Blouse song. You hear the lyrics, you pick out synth lines, bass lines, drum beats but once the song has passed, that detail evaporates; leaves you with a teardrop of pure emotion.

Charlie: “I’ve written songs for a long time, since I was about 12 and I had never really thought about my own song writing until I was asked the question. And I don’t um… it kinda caught me off guard. So it’s kinda interesting being asked questions because it makes me think about why I write the things I write… lyrics are the most important thing to me so I’m really picky about the final product. I’ll usually record a little demo… and I’ll always put the lyrics in there and I’ve told them, if there’s ever a lyric that just rubs you the wrong way, or you think is cheesy, just tell me. I’ve been lucky so far but I always make sure they know what the songs are.”

Patrick: “I find it really interesting, I like hearing it because I don’t really know… I’ve known Charlie for the last couple of years, you know but I mean, we keep it fairly light.”

Now that the band are gently forming their own identity and playing shows around the world, getting comfortable in their own skin, they plan to write and record another album, and with 7 SXSW performances scheduled in 6 days, they should be geared up for their April tour with Bear In Heaven and Doldroms. There’s still a sense of innocence about the band, though. Charlie expresses surprise that people want to help them carry their gear (“is it common over here?... We never had that before.”) and they seemed genuinely thrilled that they are considered one of the “buzz” bands at SXSW.

You might think that a band that have – relatively speaking – had a lot of things fall into place for them pretty easily might be complacent; cocky even. When I ask what they’re scared of though, their keyboard player Missy says that one of her biggest fears (aside from “having to answer questions on the spot”) is being “afraid of wasting time. I don’t like spending time doing things I don’t believe in or doing things I don’t believe in. Life just feels really short.” Patrick explains that’s “one of the potential fall-backs of living in Portland; it’s so easy to fall into that there. Pay $200, $300 dollars rent and just work at the record store, watch stupid television series.”
Paul fears the immigration officials that could stop him doing what he loves (he’s originally from New Zealand) and Patrick fears “disappointment,” which he fears is, in itself, a disappointing answer. Charlie’s fear is a poignant one and one that seems to resonant throughout the Blouse album: “I don’t know that I’m afraid of anything. I get really sad when I think about … I’m not afraid of dying but when I think about being in love and then one day, there’s an end to love and that really scares me. My own life isn’t as important to me. It scares me if I think about it too much.”

“They used to say that / you’re old enough to know / what was the use of that / if you had no control … you could go somewhere and be different / you could learn to love the controller.”