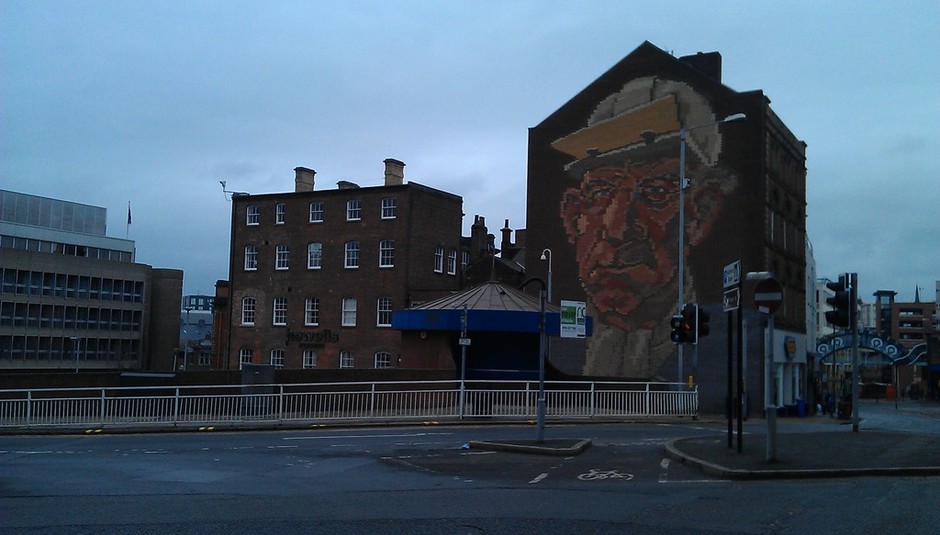 Local readers will no doubt already be aware of the devastating blow that MuseumSheffield has been dealt by the Arts Council’s decision to turn down its £1.4m funding application. While not strictly linked to the city’s music scene, MuseumSheffield is still a vital cog in South Yorkshire’s wider cultural machinery, and you have to wonder what the knock-on effect will be for other venues and institutions when there’s simply a lot less money around.

As is often the case though, out of something negative, comes something positive, as artist Pete McKee has set up Shefftopia. This new collective is “designed to bring people who care about Sheffield’s art and culture together, to promote their wares and communicate their message throughout the city and beyond”, which sounds like a bloody good idea when times are tough. Things kicked off on Sunday when a picnic protest was held at Millennium Gallery and audiences were entertained by local musicians as they ate sandwiches and made banners. It might be the start of a revolution, or it might not. Either way it’s a reminder that whether you’re a gallery geek or a hardened muso, we really are all in this together.

Continuing with the theme of “What are the former members of The Long Blondes doing now?” that we established last time around, singer Kate Jackson has finally got around to releasing her debut single. ‘Wonder Feeling’ is just glamorous as you’d expect, but with added space-age whooshes and a big, stompy chorus. A posh limited edition vinyl copy will cost you £20, but you can now get the track at a much cheaper price from your friendly neighbourhood download store.

Sticking with solo acts, Robert George Saull from The Purgatory Players and Black Gold Of The Sun has released a solo EP which, for reasons beyond my understanding, he has named after a thoroughly nice chap called Richard Furlong. The songs themselves are desperately sad, rarely made up of little more than a slowly strummed guitar and Saull’s brooding baritone, but they’re ruthlessly ambitious laments all the same. Listen to it on Bandcamp.

Low Duo do despair just as well, and they’ve just released their third EP, The EP Of Truth And Regret. The rules are the same as before – one guitar, one voice, nothing else – but it’s a formula that’s yet to go stale. This one’s on Bandcamp too.

As far as future releases go, the brilliantly bizarre Mad Colours will release their debut single proper, 'Verda Hugo' on Monday March 26th. Sadly the launch party is down in that London, but we’re sure the band will be bringing their fuzzy math-pop back to Sheffield before too long. In the meantime, here’s a new video from them, for the track ‘Antique Guerilla’:

Saturday saw the first DiS show of the year in Sheffield, when The Twilight Sad annihilated the eardums of everyone assembled at Queen’s Social Club. And wouldn’t you know there’s plenty more where that came from. On March 3rd we’re teaming up with the awesome Sensoria music and film festival to bring you A Hawk And A Hacksaw. They’ll be performing a live score to Sergei Parajadnov’s 1965 film, Shadows Of Forgotten Ancestors, at St George’s church-turned-lecture theatre, so it should be pretty special. Just as excitingly, we’ve got the inimitable Bill Wells & Aidan Moffat at Queen’s Social Club on March 31st, followed by Perfume Genius in the ludicrously intimate Lantern Theatre. Tumblr, Twitter and Facebook are the places to go for the latest announcements.

Other notable mentions for the next couple of months include Allo Darlin’ at Queen’s Social Club, which has just been upgraded from Shakespeare’s. This gig on Friday February 24th is being put on by the lovely folks at Pull Yourself Together, who started out making zines in Manchester and have recently relocated to this side of the Peak District. Let’s make them feel welcome, ey?

If indiepop ain’t your thing, then fear not, because that evening Uneven Blonde (who put on some of the best gigs in Sheffield) are launching a new night at The Bowery. It’s called Proof and the first bill boasts a headline set from the incredible Peace, so it should be a good ‘un.

March 3rd – A Hawk And A Hacksaw: Shadows Of Forgotten Ancestors – St George’s

And now for something completely different. Flamingo Love Parade play brilliantly bonkers jazz, full of time signature changes that are too clever for their own good, sticky riffs and tons of sweet, sweet saxophone. With song titles like ‘... And Then She Fingered Me’, what’s not to like? You can hear them on MySpace.

If you prefer things straighter and to the point, you might like The Hot Soles. Like fellow South Yorkshire men Wet Nuns, they’re a blues-rock duo with far fewer heavy metal tendencies and a bit more stompiness and soul. Listen to ‘Call The Regulator’ below:

For your inner emo kid, there’s Likes Lions, who this month will join Wooderson and Alt-J in supporting Ghostpoet on what must be one of the strangest line-ups Sheffield has ever seen. Their cyclical math melodies have much in common with early Thursday or Thrice, with mass sing-along choruses made for mosh pits. They released an EP, Future Colour, at the end of last year, and you can hear it below:

In fact, Likes Lions remind us a bit of Pirouettes, who sadly split last year. Fortunately, two of the band have gone on to form Lost Lambs. For now, there’s nothing up on Soundcloud, but they’ll be one to keep an eye on if the quality of their previous work is anything to go by.

"I think romance is mostly a memory o...