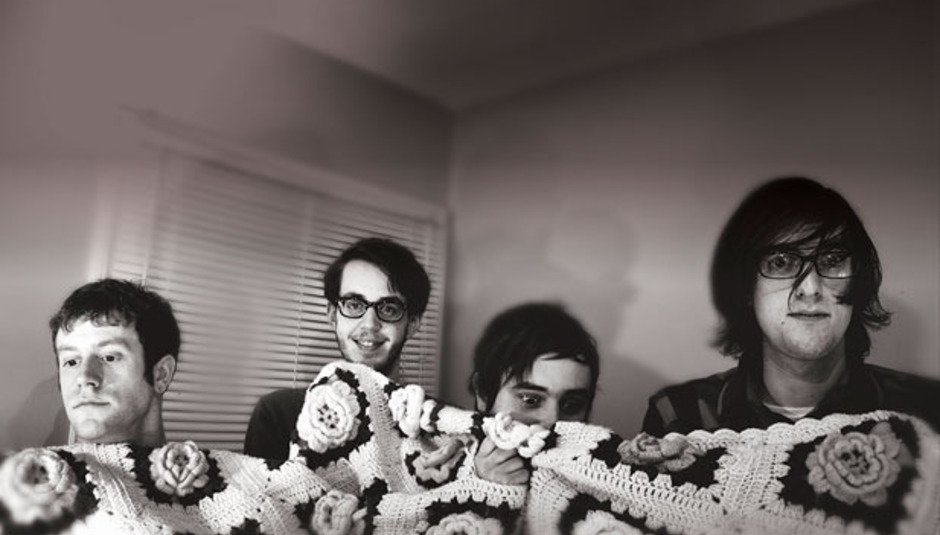 Cloud Nothings third album Attack on Memory marks a significant move forwards for the band. Not least that it's their first release as a full group - last year's self titled record and 2010's Turning On were essentially solo efforts by native Ohioan Dylan Baldi. In the last year he’s recruited a drummer, bassist and guitarist, and the impact on the Cloud Nothings' sound has been significant. Attack on Memory is far more muscular proposition than it's predecessors, an effect perhaps compounded by the band’s decision to record with Steve Albini. We spoke to Dylan down a crackly phone line...

Where are you at the moment, and what have you been up to today?

I'm in Cleveland, I'm at home. Just getting ready for our tour coming up. We're going all over the US first, coming to the UK in May.

Tell us about the new album. What's the overall mood of it?

It's a little darker, I would say, than stuff that we've done previously - both lyrically and musically, a little bit heavier and more aggressive and intense than anything we've done in the past.

Did you make a deliberate effort to alter your sound?

It was an effort to change what I was doing, songwriting-wise. It sort of naturally changed into something darker, because that was kind of the polar opposite of what we had been doing. When you've done happy pop songs, the opposite is to do a dark, nine minute, angry song.

How has working with a full band rather than on your own changed things?

Now I think about the individual abilities of the people in the band. So when I write something I might think, oh, it'll be really good if our drummer could do... something... here. Something I wouldn't consider if i was just doing this on my own. When I'm in a room just writing by myself I'm thinking about my own technical abilities, but when I'm working with people who are actually really good at what they're doing, that kind of changes things.

Tell us about the rest of your band. How did you recruit them?

Do they have much input into the songwriting, or are you a dictator over that kind of thing?

I'm definitely writing the songs still, but they each add things here and there that, had I been writing on my own, wouldn't have made it into the songs.

What's the thinking behind the album title, Attack on Memory?

It's a lyric from the song 'No Sentiment'. It's half a statement about the fact that the album sounds different than the last stuff we've done, and also a half ironic statement about nostalgia and the negative aspects of it.

What are the negative aspects of nostalgia?

Well, it can make for some really pointless, meandering, bad music. But I'm also aware that the music I'm making isn't the most original stuff out there. It does have a certain sound that some people say is very 90s or whatever, so that's where the half ironic part comes in.

So what's this bad meandering music of which you speak?

Well, there's been a lot of stuff over the last couple of years that I don't really like, that's got no real energy behind it apart from that it's supposed to bring back a memory - there's no real force to the music.

In the past you've been quite prolific. How come there's only eight songs on the new album?

It was kind of a deliberate effort to keep it short and compact, as it's the first album where we've moved the production to a more professional sound, and I wanted it to be really lean, sort of like a quick statement of where we are right now - I wanted it to be short and to the point.

What were you listening to when making Attack on Memory?

I was listening to a band called The Wipers a lot, a lot of Sonic Youth, a lot of The Ramones.

Do you think it shows through?

What other bands do you like Cloud Nothings being compared to?

With this new album we've been compared to some bands I like. Some people have said like Husker Du, the Pixies, and I like those bands a lot

What would you be doing if not this?

Oh God, I've no idea. I'd probably just being working in the grocery store, leading a very depressing life

How long do you see Cloud Nothings going on for?

As long as it stays fun for the four of us to play together. Right now it seems like it could go on for a long time

What's the next Cloud Nothings album going to sound like?

Well, I haven't written the songs yet, and I've no idea what they're going to sound like. They could be totally different and I could get tired of what I'm doing right now, or they could a continuation - we'll see. I have a feeling it's going to stay heavy and not go back towards the airy light poppy stuff.

Name a record that reminds you of growing up.

How about 'Basket Case' by Green Day. Yeah, I was a big Green Day fan. They led me away from the standard radio stuff.

Name a song that's good to listen to first thing on a Saturday morning.

There's a song by this old folk band Holy Modal Rounders, 'Reuben's Train' - I'd listen to that.

If you could only listen to one song exclusively for a year, what would it be?

These are hard questions. Probably 'Youth of America' by The Wipers

What do you do for fun?

I read a lot. Do normal things. Hang out with people.

Who's your favourite author?

Erm... Charles Dickens I'd say. A Tale of Two Cities is my favourite.

I guess sense of sight. It would make it hard to see what I was doing when I was hearing things, but that's OK

Attack on Memory is out now on Wichita.