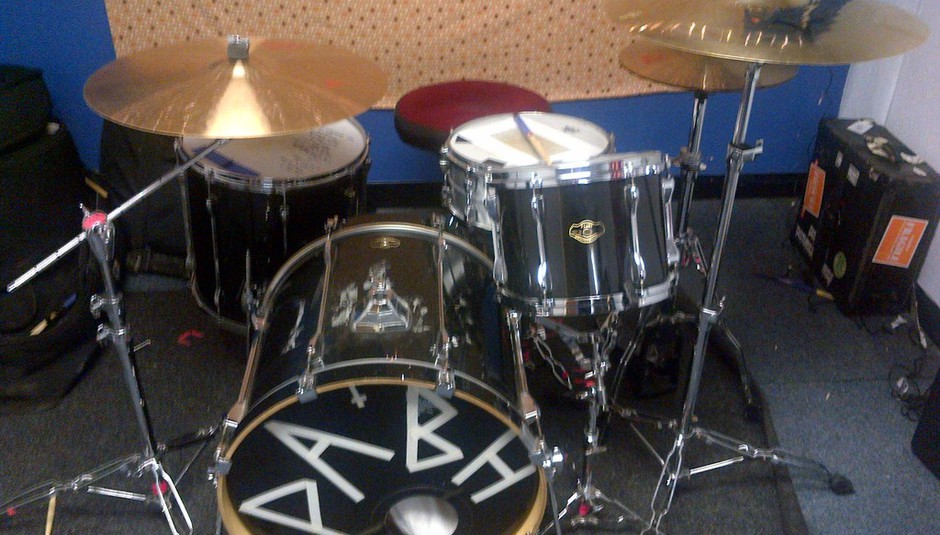 'Planet Gear' is an irregular feature on DiS, in which we ask musicians to get a bit geeky and talk us through the equipment that makes the 'magic' happen... Here, Pulled Apart By Horses talk us through their live and studio rigs and the gear that went into making new album Tough Love.

We wanted the new album to still sound like us and to retain some of the energy we have as a live band but with this second, more considered album we also wanted to develop and improve our sound. So we stuck to our tried and tested live rig for the main foundations of the sound of Tough Love, but we also took the opportunity to experiment a little and add a few extra bits of gear. Nothing too extravagant; just interesting, subtle embellishments that make for a better listening experience on the record, but aren't missed in a live setting. First I'll run you through our standard live set-up, then I'll show you how producer Gil Norton helped us add to it.

A lot of our live sound comes from the amps we use. We were very lucky to be sent some valve amps from Hayden and Ashdown. James uses a 50 watt Speakeasy, which is an all valve hand wired head with two channels that has been modified for extra gain. He plays that through a 2x12 cab. Tom uses a Cotton Club 30 watt all valve 2 channel combo amp. Tone-wise Tom dials in more of a bassy, chunky, mid-range tone. James goes for more of a high gain treble sound, so that the two guitar sounds are separated and balanced out. I play through an Ashdown ABM 900 head, which has a valve pre-amp that sounds great, through an 8x10 cab. In fact I have two of these rigs, I sometimes run both of these at larger gigs and festivals, much to the sound man's dismay, but it sounds and feels colossal.

As for pedals, we keep things fairly simple live. It's something we've figured out over years of constant touring. With hectic live shows like ours when the band and audience members are flying across and rolling around the stage, the less there is to go wrong the better. Tom uses a Boss Blues driver to step up the volume and gain a level and a Boss DD6 delay. James uses an Ibanez analogue delay for his atmospheric lead guitar parts. They both use Boss tuner pedals and rely mainly on the gain from their amps. I use and Ashdown bass driver, which is a very important part of how I get my distorted bass sound. I like it because it splits the signal in two and allows you to add drive to the bottom and/or top end. With most distortion pedals, you lose all the bottom end of your signal, so I use it to add gain to the top end and keep the bottom fairly clean. It's like bi-amping in one pedal. I also use a Sansamp Bass DI pedal that I send straight to the P.A. and not to my onstage rig. It's not just pedals that can take a beating in a live situation, of course. Some of our guitars have seen better days and have gone into semi-retirement and some of them are no longer with us - may they rest in peace! James has put paid to quite a few different Telecasters over the years, some of which were smashed to pieces and thrown into the crowd in feverish over-excited moments. Others just disintegrated from the pressure. I'm sure there's a Telecaster grave yard somewhere with James Brown's victims all lined up. His current squeeze is an American Standard Telecaster, black with a red tortoiseshell scratchplate that we fitted in the recording studio to mark the occasion. It's the nicest guitar he's ever had but we're all watching nervously to see how long it will last.

Tom is a dedicated SG man. He started out borrowing his girlfriend's black Gibson USA standard but it started getting some pretty interesting gouges in it so she took it back! He then found the Epiphone custom - the white one with three pickups - well actually it found him. It miraculously just appeared one day in the flat above the Packhorse pub where we used to practice. We left it there for months but no-one claimed it and he needed a guitar, so it was fate. Since then it's been all the way around the world and played hundreds of gigs. It's pretty much alive; there's been so much blood and sweat spilled on it that we thought it would get up and walk out the door. I've had to fix it countless times because it's been hammered so hard. However, times change and rather than completely destroying it, he decided to buy a new one. He has a Gibson USA SG Special 60s reissue with P90 pickups in natural wood finish. It looks ace and sounds even better.

I started out using a seventies Antoria Telebass which looks so cool but it's so old that it just kept giving up half way through a song. I love that bass but there's nothing more embarrassing than the bass disappearing just before a mammoth riff is supposed to kick in. So, I decided to treat myself to a proper grown-up guitar. It's a Musicman Sterling made in California. It has a limited edition finish called Midnight Burst. There aren't many of them around, so I'd be devastated if anything happened to it because I'd never be able to find another one like that.

One of the perks of being in a band is that you can totally justify buying nice equipment, because music is your job and you have to have the right tools. There's nothing extravagant about it. Lee uses Tama drumkits, he's currently playing a Superstar, which consists of 22" Bass drum, 13" and 16" toms and a 14" snare. He uses Paiste cymbals, Iron Cobra pedals and Pro Mark Japanese Oak 5A sticks, which he's recently started wrapping with Vic Firth grip tape, which is "really great when you've got a knackered hand."

Horses In The Studio The drum sound was the first port of call when it came to recording. Gil is infamously particular about drum sounds (see The Colour and The Shape) and it's one of the main reasons we wanted to work with him. Lee's relatively standard set-up ended up looking like some kind of epic Transformer, we took along our awesome drum tech Kev Reid who spent hours finely tuning a variety of different size Toms and Snares (including a free floter and a brass snare) so that we could get the right sound for each track. There were mics everywhere around the kit and the room. He also had an extra bass drum in front of his standard bass drum underneath blankets for an even bigger kick.

For the guitar sounds, Gil and engineer Dan Austin created a wall of amps, which included (deep breath:) Both Hayden amps, a Marshall JCM 900 through a 4x12 Marshall cab with celestion green back speakers, a Fender Twin, a WEM Dominator, a boutique hand built Audio Kitchen and a little all valve 5 watt amp called a Supro that Gil found in Texas. All these amps were on at the same time at different settings, each mic'd up with a SM57 and a different gold ribbon mic. This set-up meant we had a variety of different amp tones to choose from and combine for each song or guitar part. My bass rig was my trusty Ashdown rig, Gil was really impressed with the sound of it, particularly the Bass Driver pedal, we even got Ashdown to send one to the studio for him to keep. Being in the studio gave me the opportunity to try something I've wanted to do for a while, bi-amping: We put the signal through a Radial splitter box and sent one path to the Ashdown rig and the other to a Marshall JCM valve guitar stack. It just adds extra bite and mid range to the tone which helps to bring the bass out in the mix.

Gil brought a big flight box full of pedals with him, and when we opened it, it was like Christmas day. There was everything you could ever want to play with in there! Too many to list. James was particularly frond of hand made Fuzz pedal, an EHX Memory Man, a Holy Grail and Tom used a POG to drop down and Octave on Night Of The Living.

We also amassed a decent collection of different guitars to try, including a Stratocaster, Gil's Epiphone Sheraton, and my Fender Jazzmaster. I didn't actually use my Musicman on the album except for on V.E.N.O.M. On the first day Gil put this flight case down in front of me and said "use that if you want." It had his original 70s Fender P Bass that his mum bought him when he was 17. It sounds amazing, so I had to use it. I also used a custom made Jazzmaster Bass that my friend and luthier Lee Laverack built for me, that I used a lot on the album. We also had the opportunity to try a few little details in the studio. Lee did some bits of percussion such as maracas and tambourine. Gil played a Theremin on the end of 'Everything Dipped In Gold' and we even got Lee's Dad in to play Hammond organ on the breakdown for 'Night Of The Living'!

Overall, we had an amazing time recording the album, we learned a lot more about the possibilities of the recording process. We walked out of there as better musicians and we're looking forward to making the next album. Tough Love is out now on Transgressive.

Gig of the Month: A Winged Victory fo...