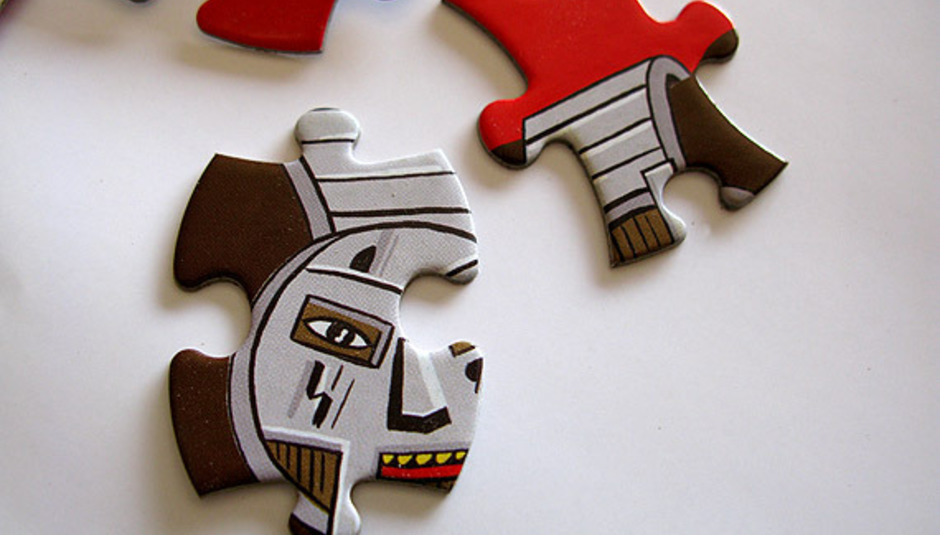 Pushy Parents are dirty cheats and magpies - in actual life they are a) dead old and b) Swedish musicians Amanda Aldervall, Roger Gunnarson, Daniel Jansson and Johann Emmoth. But for the purposes of pop presentation they are teenagers, gaily gidding about pretend-playing instruments and singing to you about how they ‘gave you the truth,’ but ‘you don’t know what it means’. As it is unlikely that such a grave thought would occur to youths as youthy as the ones in the video – much less provoke them to dance in front of pastel graphics, you must not be fooled. Nor must you ignore the fact that this single is so very like a modded DeLorean with no ambition; dials set for 2006, when ‘Young Folks’ and ‘You Are The Generation That Bought More Shoes And You Get What You Deserve’ both found their home in the hearts of those too old for hairslides, but too young to throw their hairslides away. And though all three share the deliberate, self-conscious air of distilled laboratory pop; and though it is easy – especially if you are feeling cynical – to spot the strings, all are rather affecting. I am convinced that in ‘Secret Secret’s case, this is due to the power of the now oft-overlooked key-change-chorus; a musical trick that still works on me, even though it is capriciously silly.

Anyone who has spent a fruitless minute deciding whether it would be better to be 'beautiful and stupid' or 'clever and ugly' will doubtless have examined that further – and much more sinewy - philosophical quandary; ‘If you are stupid, do you know?’. And I am put in mind of this when listening to The Proper Ornaments, who make naïve, shuffly pop that someone, somewhere believes it is helpful to mention in the same breath as The Byrds. And whose single it is possible to glean a great deal of pleasure from, if you will only suspend your critical faculties and flipping well go with it. As all these important questions lead on to the greatest of all; ‘Does endlessly thinking about stuff to the point of dementia lead to wisdom or even make you happy when surely not thinking is sometimes quite good?’; and as I cannot answer this question because I am too busy thinking about thinking, you might want to sling ‘Who Thought’ on the stereo and enjoy the good bits until I go away. It’s very pretty and has nice singing.

Now we all have the power to control our own bubble and let into it the exact things we please at all hours, it is amusing to see you humans careen in horror when your shells inevitably break. So I like the artifice of the modern world; how ‘they’ (people who: buy music in supermarkets / have never been to Wagamamas / have never considered themselves involved in an issue simply by writing something inane about it on Twitter) have been so spectacularly ring-fenced from our lives, that we often completely forget They exist. And I like how this column can be like that if I am not careful, because it means records like this one by Pampidoo, re-fashioned by a fiddler of secret synths who calls himself Tapes, can smash it all down. Insistent to the point of me wishing they were a physical thing I could swat away, the beats on ‘Ghetto Rock’ are tinny, irksome. But this single also serves as a delicious reminder that not all of music revolves around BLOODY BANDS; it can remind a person that a whole other world is out there, if you will FOR ONE MINUTE stop trying TO CONTROL EVERYTHING as IF CONTROLLING YOUR ENVIRONMENT could ever EVEN BE POSSIBLE with THIS MANY PEOPLE ON THE PLANET. Basically 'Ghetto Rock' is like being trapped in a jar with a bluebottle. But such is its sheer zeal, you find yourself falling in love with it, offering to lick its eyes if it will only take you away from bands like HOWLER.

Howler - 'Back of Your Neck' (Rough Trade)

Quick, everyone! Howler have a new single out and it’s got guitars on it and everything!

I will go with Brad Oberhofer on his amiably distorted, jangly jaunt; and I will let him tell me about this girl who wanted to leave when he didn’t want her to; because even though that is an old subject it is universal and will never, ever die until people stop leaving people who don’t want them to. I mean, I will go with him until about the 1:40 mark when there is a not very good talky bit. And then I will say I have just remembered something I put in the oven. Which will be my loss, because then I will miss the bit after the talky bit when ‘Gotta Go’ gets good again.

‘Rhymes Like Dimes’ from Doom’s 1999 debut is being re-released with its incredibly jolly Quincy Jones wibble-synth sample, and I am pleased to say it sounds still very vital. What is not particularly vital is that it is being released in a package that includes an MF DOOM jigsaw puzzle - although maybe if you think jazz tobacco is really amazing like what Doom does then it could keep you busy for ooh, a good hour.

As regular readers will know I am keen on Standard Fare, they have an appeal that is mostly down to the delightful Emma Kupa and her incredibly loud voice that is plain without being functional; heartening in a way that doesn't need adornment to make its point. Anyway, even though ‘051107’ is a rubbish name for a single it is still excellent; not as good as ‘Suitcase’ or ‘Fifteen’, but it does have a peculiarly plaintive brass section that makes it sound all the more achey.

Colin Stetson is playing on this single by AU, which is good news for those of us who like impenetrable sax sounds that no one will ever write internet How-Tos for because the only person who can make those sounds is called Colin Stetson. What it accompanies is a ranging exercise that starts off sounding spectacularly (and perhaps too) yearny as Luke Wyland sings a refrain of ‘Her eyes' (oh Crikey) before galloping off and forgetting it is even a song at all. Essentially ‘Solid Gold’ is more journey than single, employing so many percussive strands and time signatures, and all so energetically, that it inevitably seems a little tangled. The first 30 seconds are earnest, bombastic rock of the sort I cannot be getting on with because it is liked by the sort of men who think a beard automatically makes them interesting. And then it goes totally hatstand and I like not knowing what the fuck is going on.