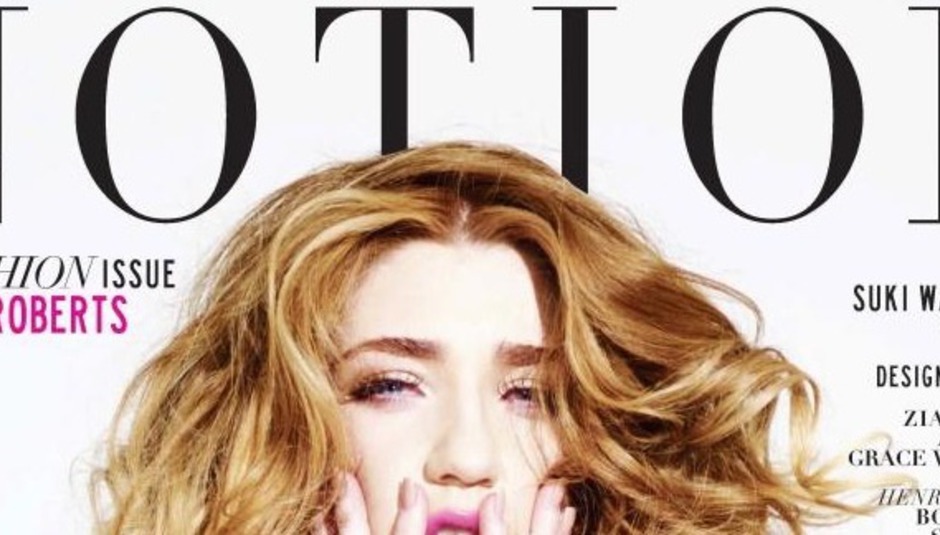 Ah, that weird week between Christmas and New Year's Eve. It's a week when DiS likes to kick back and read, and we thought it'd be a good chance for you (and us too) to catch up on some of the best bits of writing from this year. But it's the holidays, and we're feeling mega-lazy, so we've let Steve from Stack Magazines - a brilliant magazine subscription service that sends you a different magazine each month - takeover the site. This week, you can read the fruits of chats with the editors of some of his favourite music magazines, each sharing some insights from the year that was and their favourite thing they read in 2011. Here Steve chats with Michael, editor of Notion..

Most music magazines will tell you that they don't care what a band looks like as long as they sound good, but Notion takes a different view. They're just as much a fashion magazine as they are a music magazine, meaning news pieces on t-shirts as well as bands, and big, dramatic photo shoots as well as long artist interviews.

How would you characterise the year just gone?
Michael Lewin: We’ve been focusing a lot on our sales processes and working out a long-term strategy for working with the brands that we want to work with. A lot of my year has been based on that, so the more boring side of things really. And it’s shown that the music industry isn’t where we want to go if we want to be financially viable. There just isn’t that much budget, and given the way that music is now sold, I don’t think there’s that much interest or use in print advertising.

It’s not like the lifestyle world, where there’s a value in the prestige and the image you create to push forward your brand. And also frankly there aren’t that many straight-up music retailers who are prepared to spend money in print to get people to come into their shops. That’s just not how it works.

From the more creative side of making the magazine it’s been an interesting year. I think Notion has at times been a bit of an also-ran magazine that didn’t really have as strong an identity as it could have had. But this year we feel like we’ve really nailed our colours to the mast and found our niche and identity, which is being the only dedicated music and fashion magazine. Conceptually for me that means not necessarily covering the artists who are making the best, most exciting, most forward music, but looking for artists who combine making great music with an understanding that the role of an artist can involve something beyond simply the production of their music. It involves the way they portray themselves and the way they come across. We’re really interested in working creatively with them.

By setting out to be about music and fashion it sounds like you’re reflecting something you’re seeing happening in the wider music industry.
It’s about the realities of producing an independent music magazine without big backing, without a lot of budget. When you’ve only got a certain amount of money to spend on creating a great quality piece of work you have to make the decision; are we going to throw all of our effort into telling a story with words, or are we going to put our money behind crafting beautiful images and lovingly working with design to make something that looks beautiful? We obviously go for the second side of that, and that means putting resources into fashion, into photo shoots and collaborating with people.

And what about music journalism specifically?
You can’t ignore the influence of the internet on the way we engage with new music, but the internet has also affected the way we process and tell stories. I’m a great lover of what The New Yorker and The Atlantic and the great American magazines still do in terms of telling long-form stories, but we don’t see it in music.

There’s a wonderful writer called Ruth Saxelby; she’s deputy editor of Dummy magazine and she wrote a piece for us recently that was fantastic. It was about this great breakout internet success called Boiler Room, which happens every Tuesday, just a couple of DJ sets that they film and stream live, and over the course of 14 or 15 months it has built this worldwide cult following. The way Ruth told the story was to engage with the people who set it up, but also to talk to the fans, who are all watching it at the same time, commenting on it in the chat room, making jokes about the people in the audience… so this kid in a basement at 2pm in Texas is doing the same thing as a group sitting in their bedrooms at 9pm in Glasgow. That’s the story we need to start telling about music and lifestyles today. That’s the sort of thing you have to engage with – how is the way we’re digesting music on the internet affecting the way we can report about the culture and the lifestyle of music.

You started by talking about the commercial side of the magazine, and you’re clearly very passionate about where music journalism should be going. Do you think that next year you’ll be able to bring those two things together?
I hope so! When we’re going to put the effort into telling a story, we’re going to make sure it’s a good story and it’s a story worth telling. I think that less and less we’re going to bother with interviews based around album releases. There’s a place for those and it’s very important – people want to read about an artist and what they’ve been thinking about when they’ve been making a new album. But you’ll get that in 1,000 Q&As online and most of the other music press as well.

So we’ll continue to provide that but we won’t put the resources and the space into that. When we tell a long story we’ll make sure it’s about something and it affects people’s lifestyles, and if we’re covering an artist we’ll make sure we’re dealing with somebody who wants to get onboard with us creatively, because more and more for the people involved in the magazine it’s about being a creative journal and documenting the people who inspire us and trying to create something inspiring with them.

Article of the year
There’s Ruth’s Boiler Room piece for Notion or Kevin Perry’s Bjork interview for Drowned in Sound – that was really in-depth, it really took the time to get under her skin.

But I think my favourite has to be Kev Kharas’s difficult interview with Tyler the Creator for The Stool Pigeon. It’s just a great example of a writer responding to somebody who doesn’t want to be interviewed but building a story out of it anyway.

For more about Notion, visit notionmag.com.

Stack chats with Loud and Quiet about...