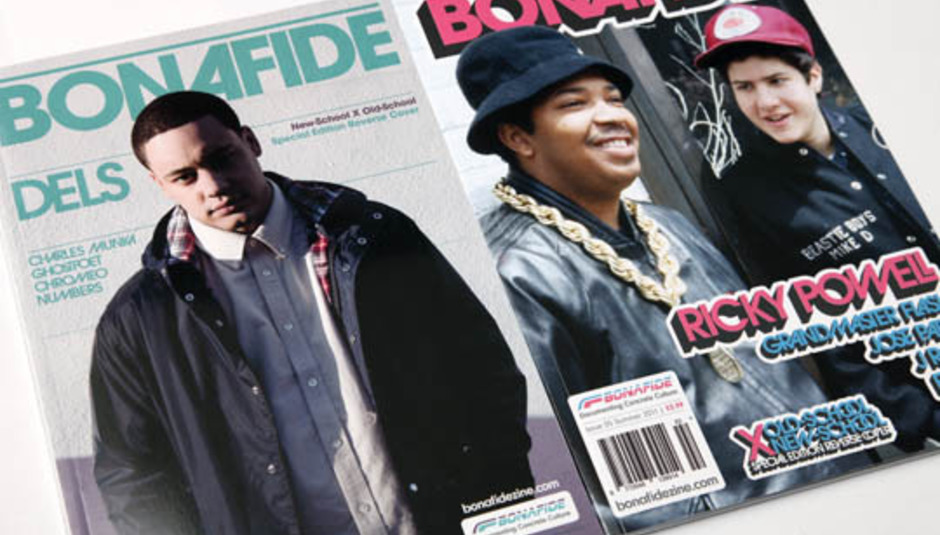 Ah, that weird week between Christmas and New Year's Eve. It's a week when DiS likes to kick back and read, and we thought it'd be a good chance for you (and us too) to catch up on some of the best bits of writing from this year. But it's the holidays, and we're feeling mega-lazy, so we've let Steve from Stack Magazines - a brilliant magazine subscription service that sends you a different magazine each month - takeover the site. This week, you can read the fruits of chats with the editors of some of his favourite music magazines, each sharing some insights from the year that was and their favourite thing they read in 2011. Here, Steve chats with James Griffin, the editor of Bonafide...

Everyone who works on this Leeds-based hip hop magazine has also got a 'proper' job, meaning that Bonafide is a real, bonafide labour of love. Covering all aspects of hip hop, from 80s New York to Glasgow's groundbreaking Numbers label, they're dedicated to giving hip hop a British print voice.

How has the year been for Bonafide?
James Griffin: It’s been satisfying. We released the best magazine we’ve done so far – both in terms of responses to it and the actual content itself – and we’ve had newsstand distribution for the second time. We’ve had a lot more feedback from people who buy the magazine; lots of good stuff via email and social media.

Truth be told, though, it’s tough. All three of us have full-time jobs outside the magazine and it’s still very difficult to crack the market when you’re independent. Put it this way; if we were doing something like this five years ago it might have been easier to get more commercial backing in terms of sponsorship, but any opportunities like that seem to have dried up.

Has that changed the way you go about making the magazine?
Yes and no. The magazine always has its challenges in that making something outside of work that you’re completely happy with is a trying business, and that can mean you have a love / hate relationship with it. When things go well it’s great but when things get busy elsewhere and you’ve got other challenges as well, whether it’s redeveloping the website or organising media partnerships, then sometimes the magazine kind of takes a back seat.

Do you have the conversation of whether you’re going to continue making the magazine next year?
We always regroup after every issue and have a conversation about what we want to do. But we’ve got such good content for the next issue that we’ll carry on with that and we’ll make it even better than the last one. We’ve also got an upgrade to the website scheduled for next year so that might take precedence over everything else. That’s important because a lot of the feedback we get for the print magazine is great but then also the competitions on the website get loads of entries. And then we do the Bonafide Beats series, which is a mix-tape download series by artists who we feature in the magazine and we get a lot of downloads from that. That stuff’s not unique to us, but the way we package it, the way we dress it up, I like to think there’s still a niche for us to explore.

That’s all web-based – do you find yourself thinking that you could keep doing all this interesting work but actually you don’t have to print to do that?
You’d have to be pretty dogmatic not to think that. Yes it does go through your mind, but the whole starting point of the magazine was that we liked print and design. If you were to ditch print and go online you’d need to ask a lot of questions – it takes a lot of time and effort to put something together, and even if you were to release something on Issuu say, or just as a downloadable magazine, I think a lot of the value would be lost. For us it was always about putting something together that was timeless, that would last. That was always our ethos and it still is.

What are you looking forward to in the coming year?
Issue six should drop towards the end of January, and it’s going to go up another notch. We’ve got an interview with Doom and we’re really pleased with that – he does one, maybe two interviews a year, so that’s really good for us.

There’s going to be a dark theme to the issue, and there’s loads of really interesting stuff in there. We’re working with this guy called Egon who runs Now-Again, a small record label in America. He’s released this thing called East of the Underground, which is kind of a funk soul record from the early 70s that was produced by US servicemen, kind of like X Factor for Vietnam. It was given to people when they were conscripted into the US army during the Vietnam war and Now-Again found a copy in Germany and they’re releasing it at the end of the year. It’s fascinating stuff and a real insight into what’s going on today – people talk about cultural tension with finance, the Middle East and political turmoil, and I think that 1967/68 was a similar sort of period, and very relevant to what’s going on now.

It’s obvious that it’s the content that you’re excited about. It’s the actual stuff that goes in the magazine that what keeps you doing what you do.
Yes, absolutely. Well, there’s some amazing stuff out there and who doesn’t want to pick something up and find something they’ve never heard about before and pass it on to someone else? I think we always wanted to produce things that looked amazing but read really well too. Hip hop fans deserve the same kind of coverage as anybody else, whether it’s indie or country music or whatever. So I suppose we always wanted to bring something that was exciting; that was always one of our chief goals I suppose.

Article of the year?
David's interview with DELs in Bonafide issue 05 was really strong and demonstrated a sophisticated, erudite and well rounded urban act.

But if I had to pick one for the year I’d go with Abdul Malik Al Nasir’s piece for the Guardian on Gil Scott-Heron. I thought it was amazing on many different levels, in particular the power of music to have a positive influence and the fact that Gil Scott-Heron seemed to care about society and people as much as his music claimed.

For more about Bonafide, visit bonafidezine.com/magazine.